The  grand masters of French pastry arts seem have to shifted their attention to the East and this comes as no surprise. With an already intensely saturated populace of macaron lovers back home and the vast potential of an ever-growing market from China, it makes perfect sense for these big names in French cuisine to stretch their tents and earn the Asian dollar. Ladurée, Alain Ducasse, Joël Robuchon are already here and it is timely that they are now joined by one one of the most esteemed colleague, Pierre Hermé.

Pierre Hermé has been in Japan for quite a number of years now, with boutiques in several of her cities, most notably a flagship store in Aoyama, Tokyo. But interestingly when I’d visited his boutiques in Tokyo, I chanced up not local Japanese but tourists from China and Taiwan who have specially come to sample his creations. A sort of culinary pilgrimage I’m sure it was for them as it is for me. Surely Monsieur Hermé would have noticed that too. And a store in Hong Kong was nothing short of being strategic, with visitors from all over Mainland China flocking here at all times of the year. The potential would have been too great to miss and so presents the temptation and desire to venture into the Mainland China market. Hong Kong would be the ideal gateway. 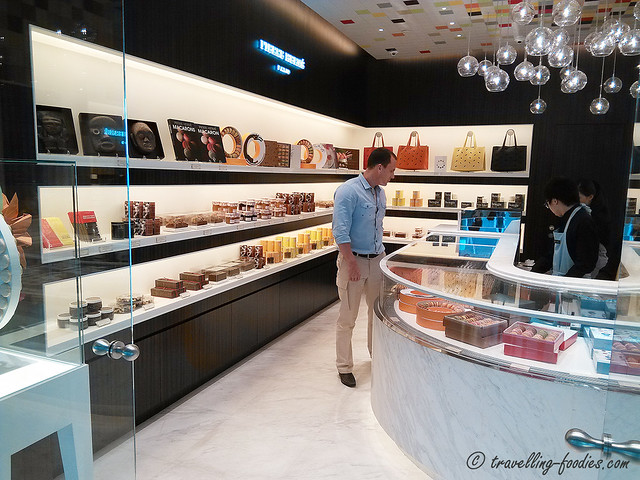 The outlet at the International Financial Centre (IFC) in 中環 Central, Hong Kong is a small walk-in and takeaway store, probably no more than 15 by 10 feet, not unlike his outlet in Shinjuku Isetan. But the selection is by far less compared to his joints in Japan. The main highlight of the Hong Kong store is of course macarons, what Monsieur Hermé revolutionalised more than 3 decades ago. It remains till today what he is most famous for. Otherwise, the selection in his boutique is rather limited. When we visited just a couple of days ago, there were some pralines and bonbons, 2 or 3 types of gâteau de voyage, a small range of confitures from Christine Ferber which are in line with his “Fetish” series, some cans of tea, chocolate bars, copies of his Macaron book and his designer Tote bag. This is a far cry from even his smallest outlet in Japan where one would be able to find in addition to what we can see in the Hong Kong shop, a range of petite gateaus, entremets and petit four secs like financiers, madeleines, florentines, medallions and sables. Also, the selection of macarons in Hong Kong definitely falls short of his full repertoire of flavours available, i.e. only 6 “to choose from” and all being pretty “safe” ones. If one was to opt for the 24-piece box set, one could get an additional 7th flavour which was not available a la carte, i.e. Macaron a l’huile d’olive et vanille , i.e. his wicked olive oil macaron. But we ain’t ready to eat that many macarons, let alone splurge so much on them. So we settled for a box of 12-pieces which carried the standard 6 flavours and even that was already HKD330 to start with. 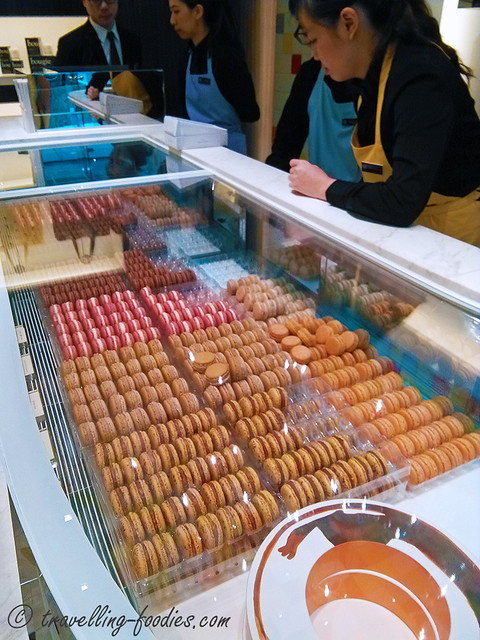 The chiller display for macarons which took up almost the entire right side of the shop… only 6 flavours are available, much to my disappointment. And pretty “safe” flavours of vanilla and chocolate. Nothing from his latest “Le Jardin” series which would have made me very happy… alas no that did not happen. 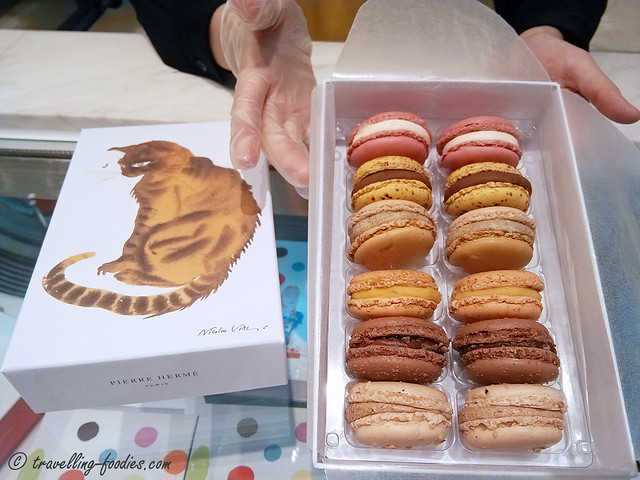 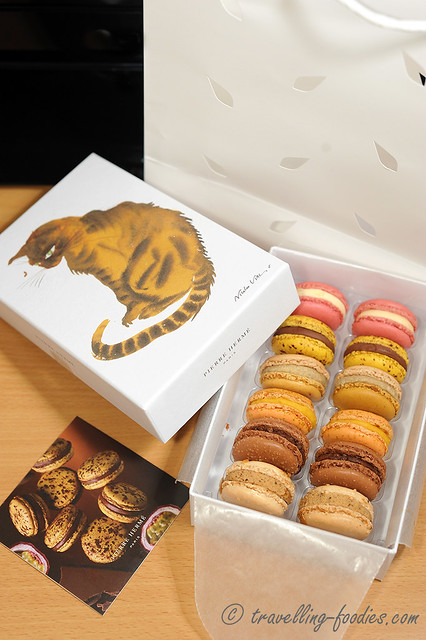 Back in the hotel. I had intended to handcarry them back to Singapore but given the unforgiving summer climate in Hong Kong and Singapore, we’d decided that it would probably be better to enjoy them in situ instead. I am so glad that I did. Do not be fooled by the “advice” given that the macarons can be “kept up to 4 days”. We rushed back to the hotel after purchasing our box and kept them cool in the bar fridge. We even left the aircon in the hotel room running at 18 degrees. Though most of the pieces are intact, some of them were already showing signs of yielding. Yes macarons are best enjoyed a day or two after they have been made and assembled, but we are very sure they are not made the very same day we’d purchased them. Made in a central kitchen in Alsace France, Pierre Hermé macarons have to sent to Paris before being air-flown to Hong Kong. And this is by no means a daily affair so which ever macarons they have in the shop in their freshest and most pristine state would have been at least 2 days old. I am sure some pieces we had are probably more “mature” than what they ought to have been. Nonetheless, still very very enjoyable! 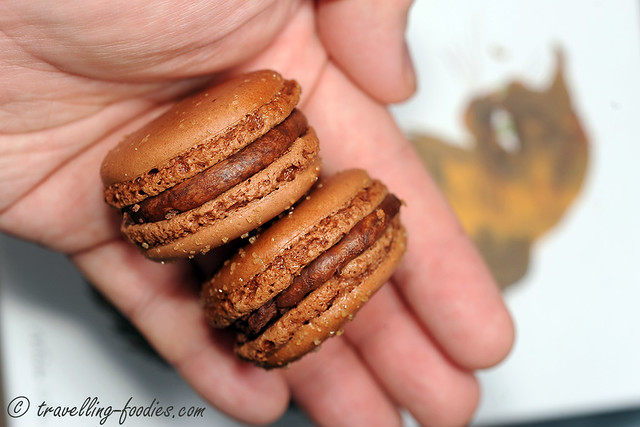 Macaron Infiniment Chocolat Pérou – made with single grand cru Peruvian dark chocolate (Chocolat Pure origine Pérou Province de Morropón, Communauté d’Asprobo), likening his previous creations like Chuao and Porcelana. This is one of the only 2 dark chocolate ganache-based macs available. Truth be told, I would very much have preferred ganache-based filling over buttercream or white chocolate ones. Logistically, the latter are less stable and not good for travelling. And white chocolate can hardly be called chocolate to start with. Gastronomically, the latter can be rather cloying and too sweet and thus less enjoyable. Though Pierre Herme macarons have not disappointed me greatly to date, I would rather not take chances and prefer to err on the safe side. However for Pierre Hermé Hong Kong, it is really a case of beggars can’t be choosers. Only 6 flavours were available so there was very little that we could have done.

Tastewise, the chocolat noir ganache filling was good but not great. Great would have been some of his other chocolate macaron creations like Macaron au Chocolat Amer and Macaron Chuao. For me, Infiniment Chocolat Pérou is still not quite there and the difference lies in the subtle nuances of the chocolate used. I didn’t quite get the sugar crystals on the shell either. Doesn’t improve the overall palate experience of the macaron and most certainly not the aesthetics of it. 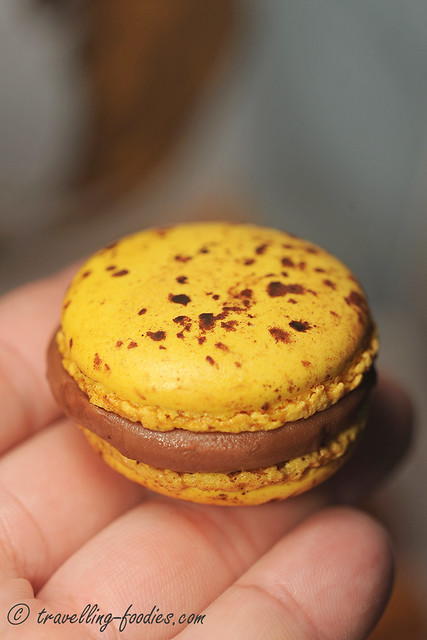 Macaron Mogador, enthralled to see an old friend again, having tried it in from Pierre Hermé Paris as well as making it before. The marriage of passionfruit and milk chocolate is one which goes well for some but not others. While others loathe it, thankfully I loved it and I still do. 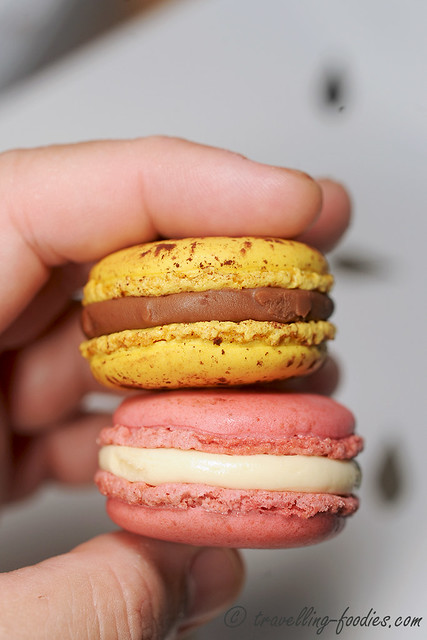 Macaron Mogador and Macaron Infiniment Rose, one of ganache and the other buttercream. Which ever the case, both very generously filled. 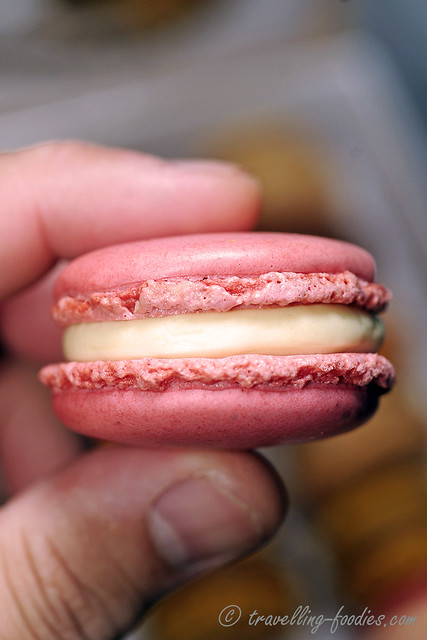 Macaron Infiniment Rose – tried this before brought back from Pierre Herme Paris… wait or was it London? Oh well… I like it enough but still not as in wanting as Macaron Ispahan I guess. It is almost puzzling why PH Hong Kong doesn’t carry the latter considering how famous and popular it is. Oh well, whatever they do, they should have it soon. It is almost sacrilegious to see Pierre Hermé and no Ispahan. 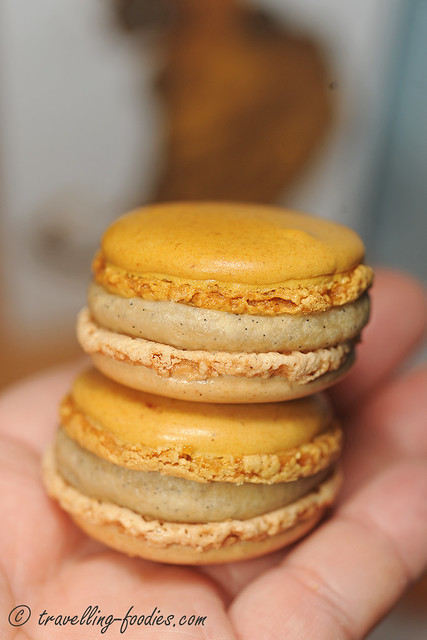 Macaron Crème Brûlée – surely a popular piece amongst the range. Vanilla with caramel buttercream is a classic can’t-go-wrong. And sure enough it was pretty enjoyable.  Vanilla was very apparent both visually and in flavour. The looks of it is already very reassuring, for a vanilla lover like me that is. The rendition with caramel was pleasant but not terribly exciting. I would probably have enjoyed it better if some bitterness from the burnt sugar comes through more, creating more balance to a macaron would have nothing more than being sweet otherwise. 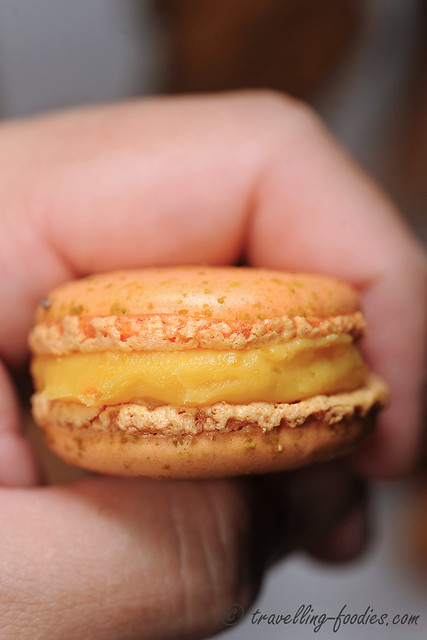 Macaron Arabesque , an apricot and pistachio piece. This is one of his signature combinations which have been around for a very long time already. Also, it seemed to be a very timely piece to usher in heat of summer which is incidentally also the season for stone fruits. The filling is of white chocolate base with apricot puree, bits of soft dried apricot as well as a hint of apricot liqueur. The last component is supposed as it was hardly apparent if not at all. The pistachio component takes the form of a praline croustillant which unfortunately was no longer crunchy despite the use of Gavotte biscuits. I like the tart flavours carried through by the apricots but cannot say the same for the pistachio paste added for the croustillant which tasted somewhat chemical and artificial. The filling also proved to be too laden with moisture which caused the shell to yield and soften much more than the other macs. Naturally that affected the tasting experience on the whole. So overall, this mac didn’t really work very well for us. 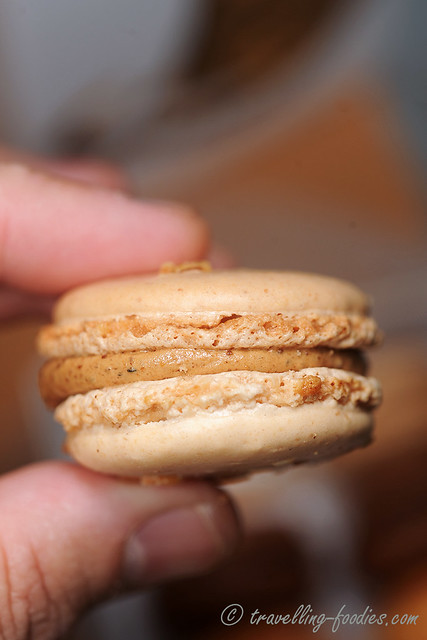 Macaron Praline Noisette – a  form of what I affectionately call his “Nutella Macaron Series” from the liberal use of hazelnuts. First there was Macaron Praline a l’Ancienne and then last year I’d tried Macaron Pietra which uses Piedmont hazelnuts. Now there is Macaron Praline Noisette which I am pretty surely that it is just a variation of the same theme as with its predecessors. For one, they tasted pretty much the same. Same unforgettable aroma of roasted hazelnuts being made into a praline before being crushed and incorporated into the filling with the same crunch from the hazelnuts embedded shells. Structurally, Macaron Praline Noisette seems to be more stable than Macaron Pietra . The filling used in the latter is very very unforgiving to travel, if I recall correctly. But the flavours are quite unmistakable and very lovely. I won’t mind having a whole box of this really. 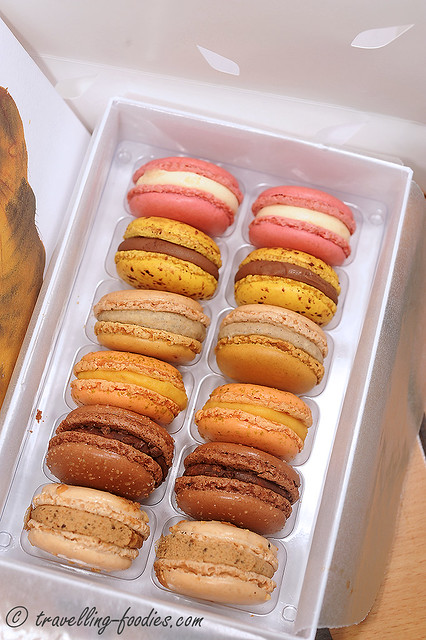 So yes, please grab yourself a box of macarons if you happen to be in Hong Kong. They are better than Sadaharu Aoki macs on several accounts in my humble opinion and beat those from Ladurée hands down. Do take note that their flavours change periodically. Just a week or two before our visit, they had “Imagine” , a new creation with matcha and black sesame crisp as well as  Infiniment Chocolat Porcelana and Macaron Celeste. I had tried the latter two before but it would have been lovely to be able to “revisit” these flavours. Alas, luck and opportunity was not on our side.

Just a few months ago, Tokyo was the closest one could get to pastry heaven and now that Pierre Hermé has opened an outlet in Hong Kong, perhaps a teeny peek of what pastry heaven would possibly look like seem to have come a little step closer. Rumour has it that Pierre Hermé had been sighted in Singapore around the time his little boutique opened in Hong Kong. Perhaps another outlet in Singapore to come following suit to what Maison Kayser and Ladurée had done? I can’t wait!