Whenever we are in Taipei, we’d always make it a point to drop by Sadaharu Aoki’s dessert salons in either Bellavita or Hotel Regent Taipei, and sometimes both! There are always something new or seasonal, like a surprise that awaits us to uncover! Last year, we had Sensuelle, a Hotel Regent Taipei exclusive and our visit to Patisserie Sadaharu AOKI paris earlier this year was no exception. There were two new creations that were just waiting for us to sample! 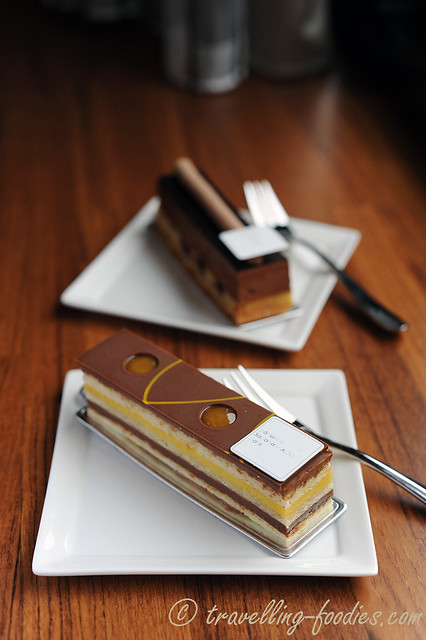 The first was Eledia 爱蕾蒂亚. What a beautiful name! It reminded me of one of Pierre Herme’s early works from his “fetish” series which took on feminine names along the lines of Satine, Celeste and Arabella.

Eledia is a multi-layered sliced entremet with layers of  darjeeling tea infused ganache and citrus infused mousseline cream alternated by thin layers of almond joconde biscuit sponge. The top is elegantly decorated with a piece of chocolate decor with gaps that allow the citrus gel layer beneath to peep through. 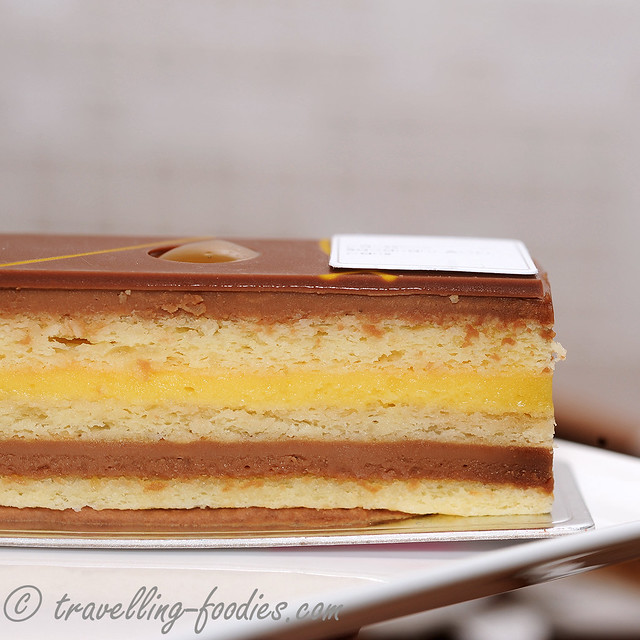 I was initially worried if the tea infusion would be able to stand out against the chocolate but upon the first bite, the skepticism is quite unfound. In fact, one could readily make out the familiar aroma of Darjeeling against the rich chocolatey backdrop even before sinking one’s teeth into the piece. After getting to know more about the tea used, I’d realised why. Top-grade FTGFOP class tea leaves harvested from the Teesta Valley in Sikkim was used. FTGFOP stands for “Tippy Golden Flowery Orange Pekoe” for those unfamiliar with tea terminology, which signifies that only the very young shoots that  recently sprouted were harvested. Some tea-loving folks coined a parodiable catchphrase for the same acronym as “Far To Good For Ordinary People” which is both tongue-in-cheek yet revealing a certain level of truth attesting to the premium quality of tea accorded with this grade status! This tea is much noted for its bright and lighter flavour hues, compared to say those harvested from the lower altitude Assam area which in turn produces the darker and more robust varieties of Darjeeling teas. Together with the chocolate, the tea flavours likens a solo violin serenading a beautiful ballade against the warmer hues of the accompanying lower register strings. 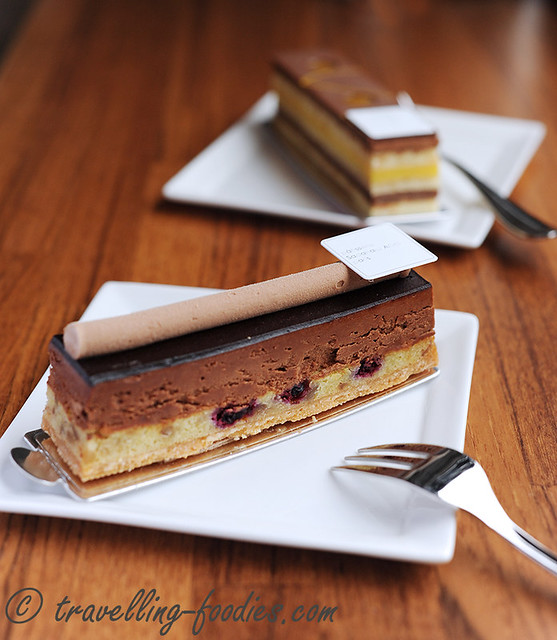 Mont D’or (金山）, which means “gold mountain” in French quite literally was another new creation available just a couple of months back. We later found out that it was inspired by the a similarly named area in Eastern France where the river Rhone flows alongside and thus well-known for its scenic landscape against the backdrop of the French Alps.

Like Eledia, it is also a multi-layered sliced entremet with layers of pate sucree at the base and working upwards with , almond sponge embedded with blackcurrants and chestnuts, followed by a thick layer of mousse au chocolat noir at 68% cacao, and on top of that, a dark chocolate mirror glaze and finally a thinly piped piece of mousse au chocolate au lait high up on the “summit” of this golden mountain. 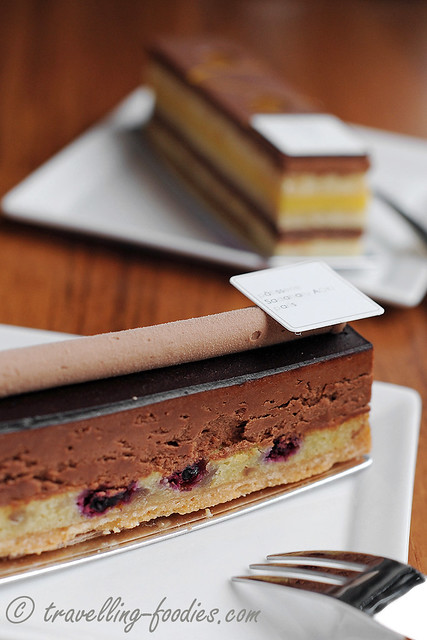 This is not the first time we see a combination of blackcurrants (cassis) and dark chocolate in Aoki’s works. In fact, his much-earlier creation “Cassisier” is essentially of the same combination. We had very little morsels of chestnut embedded within the almond sponge layer in the cake we bought. Practically non-existential. The dark chocolate layer was quite delicious while the mirror glaze was very well executed. On the whole, the piece was still quite enjoyable, but somewhat lacks the oomph factor as well as the sense of novelty one would expect in a “produit nouvelle”. It is the latter that we were anticipating, but thankfully had found through the earlier piece, Eledia. So one successful surprise is really better than none! All is not lost! 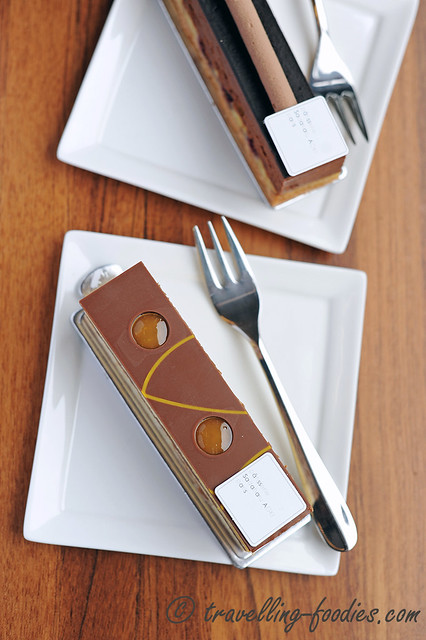 This entry was posted on June 15, 2014 by Alan (travellingfoodies). It was filed under Food, Travel and was tagged with bellavita, Eledia, 青木定治, french pastry, Mont D'or, patissier, pâtisserie, sadaharu aoki, Taipei.