Talk about street food in Taiwan and one cannot dispense discussing “Oh-Ah Mee Sua” 蚵仔麵線 Taiwanese Oyster Mee Sua. With humble beginnings as a “poor man’s snack”, Oh Ah Mee Sua soon became an internationally renowned dish which one would flock to eat when they visit Taiwan. That is certainly the case for me. Over time, two versions evolved, one which uses fresh oysters 蚵仔, and another with braised large pig intestines 滷大腸, both equally popular with their own loyal followers. I love ’em both as they offer very different experience in flavours and textures. So if you like Oyster and Large Intestines Mee Sua like me, do give the recipe a try! 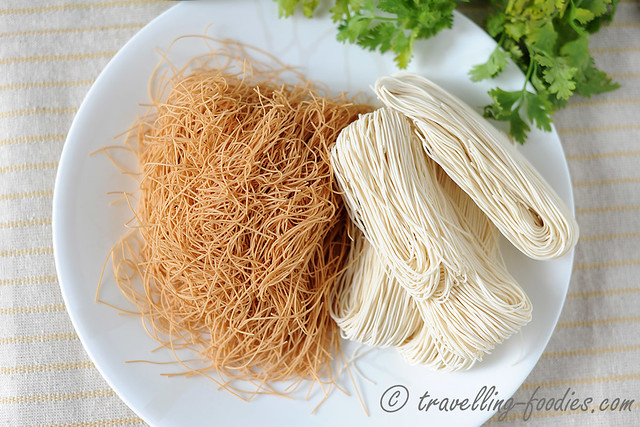 Mee Sua 麵線 (面线）is a form of wheat based noodles unique to the Fujian and northern areas of Guangdong provinces in the southeastern coast of China. The latter is the heart of the “Teochew” district in an otherwise largely Cantonese dominated province. Because the noodles are very thin, it is sometimes translated as “wheat vermicelli”. However, it should not be confused with 米粉 “rice vermicelli” which uses soaked and ground rice instead. Tradition of making and eating meesua in China can be traced back more than 800 years ago during the early Ming dynasty in Quanzhou 泉州. However, meesua culture reached Taiwan only much later during the Qing Dynasty around the time of Kangxi’s reign when people from China, mainly from Fujian were allowed to migrate to Taiwan around 300 years ago. It has then become a common staple amongst the Taiwanese folks be it street food enjoyed outside, or part of a daily meal cooked at home for loved ones. Apart from the “white meesua” 白麵線 which originated from China， the Taiwanese developed another version known as “red meesua” 紅麵線, which is what we see being commonly used in the Taiwanese delight, oh-ah meesua. White meesua is traditionally made by mixing wheat flour with salt and water to form a dough, which is left to ferment slightly to gain elasticity before being stretched and dried over bamboo poles out in the sun. The wheat vermicelli made this way are still raw. Thus during cooking, starch from the noodles would naturally come off the strands, acting as a natural thickening agent to become the famous Hokkien dish, meesua gor 面线糊. However, the ”leaching” of the starch from prolonged cooking also weakens the structure of the noodles invariably, causing them to soften very quickly reducing the noodles to no more than lumps and clumps, no longer able to hold their shape as individual strands. When meesua reached the shores of Tainan together with the folks from Fujian, they improvised the method of making meesua by steaming the “white meesua” over prolonged periods of time  to become “red meesua“. The starch content is cooked by the heat and breaks down to form shorter glucose chains called dextrins. This is a process known as “醣化” which causes the meesua to lose their elasticity and bouncy “QQ” textures but in exchange, become very tolerant to subsequent cooking (增加耐煮性) to become what the locals would say 久煮不烂. 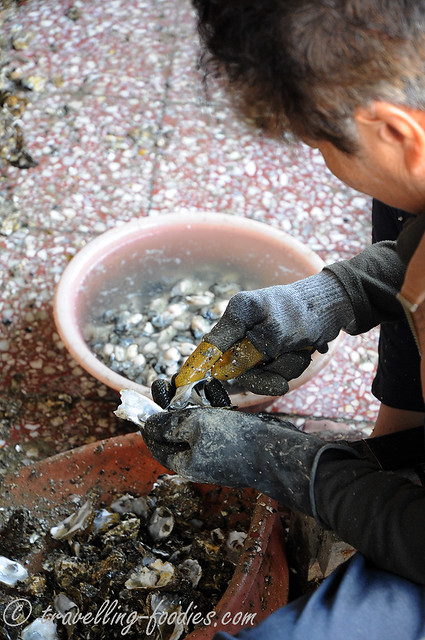 I’m not entirely sure which came first, the oyster version or the braised large intestine version. But I do know that the oyster is preferred in the southern parts of Taiwan, while the stalls in Taipei seem to have more offering braised large intestines instead. It is quite understandably so, as the major oyster-cultivating regions in Taiwan are in the southern coastal regions of 布袋(Budai or Bor Deh)、東石 (Dongshi or Tang Jiok) in Chiayi  嘉義, as well as 七股 Qigu or Tsit Gor) in Tainan 台南. In these places, oyster-themed snacks naturally woven into a range local delicacies which become very famous through Taiwan, like 蚵仔煎 oh-ah tsen oyster omelette, 蚵嗲 oh-teh deep fried oyster and chives pancakes, and of course, 蚵仔麵線 oh-ah meesua Oyster Mee Sua! 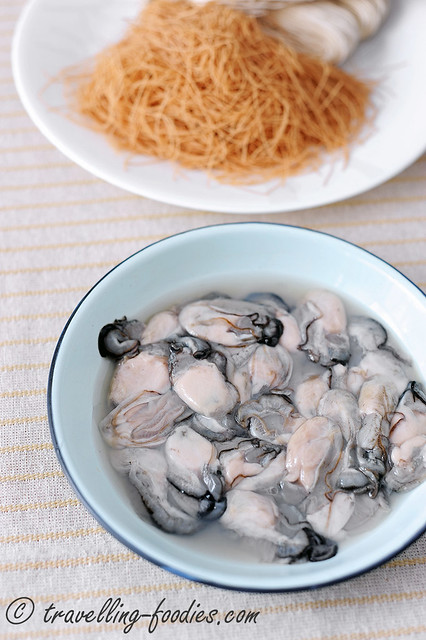 Comparatively, the oyster version is easier to cook as the large intestines require quite a thorough process of cleaning and braising. But the textures are vastly different so do both a try to see which one you prefer! When we buy oysters, be it fresh or frozen, it is best to rinse the oysters with a brine solution made with just water and a generous amount of salt. Keep the oysters soaked in salt water until they are ready to be used. Before adding them to the cooked meesua broth, the oysters are customarily coated with a thin layer of sweet potato starch 番薯粉 which helps to make the oysters more succulent and at the same time prevent them from being overcooked. 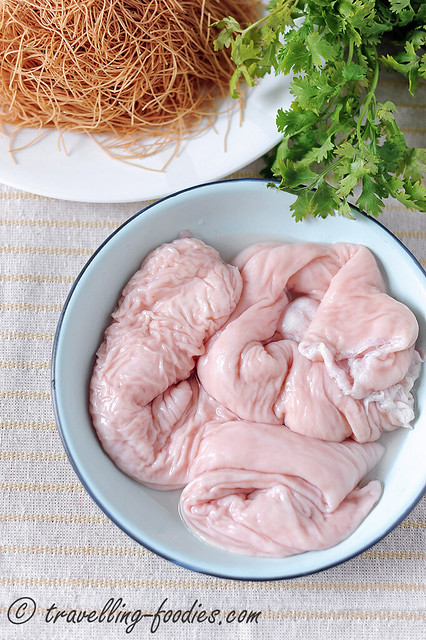 As mentioned, the large intestines version require a bit more work. The whole set of intestine first has to be inverted and thoroughly cleansed to remove any residual bits from the insides. Excess fat can be trimmed off but it is generally advisable to leave some intact for better palate texture. The non-oily parts are actually what constitute the villi layer of the large intestine and is not fat. Buy the pig’s intestines as fresh as possible to minimise cleaning and avoid any which is giving off an unpleasant odour. After cleaning, the large intestines are then cooked in a pot of water with slices of ginger added to musk any nasty smells. They are then rinsed again to remove any scum which might have been stuck on the undulated surfaces before being added to a braising sauce, in which they are left to braise for at least 1 hour until they are soft and better still, to steep overnight for the flavours to get soaked in. Sounds like quite a lot of work but the efforts are definitely worth it. 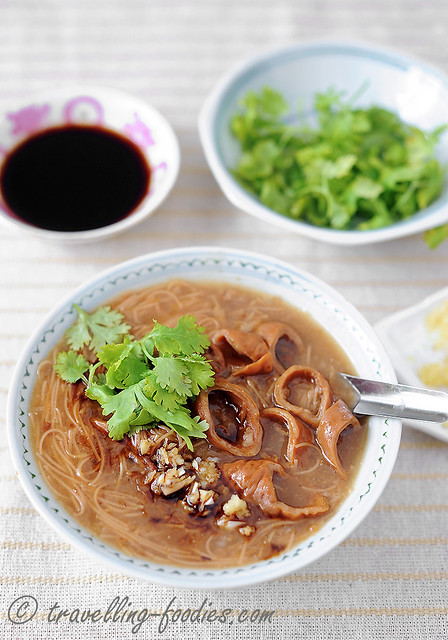 The broth base uses largely bonito flakes (katsuobushi) which lends much of the umami flavours. For good measure, I’d also added a pork-based stock made from the knuckle bones and some spare ribs. The combination of flavours is fantastic and I would dare say very close to what I have enjoyed in Taiwan before! 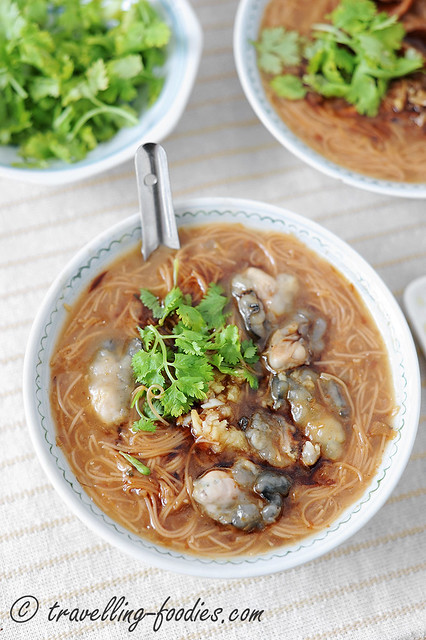 Method
To prepare the large intestines, start the day before.
Invert and rinse pig intestines very very thoroughly, removing any excess fat if necessary. Rub generously with salt and flour and rinse repeatedly until clean. Invert back to original form and set aside.
Bring a small pot of water to boil, add ginger and spring onion and large intestines and cook for 5 min.
Remove intestine from water, drain and rinse thoroughly under running tap water to remove any scum on exterior.
Discard water and ingredients in pot and rinse it thoroughly.
Add to pot five spice powder, dark soya sauce, sugar and sufficient water to keep intestine submerged during braising.
Bring the concoction to a boil and add large intestines.
Bring to a boil again for 5 min before lowering flame to a gentle simmer. Leave to braise for 1 h until soft.
Leave the large intestines to steep in braising sauce overnight.
Before serving, cut with scissors into bitesize morsels.

To prepare meesua broth, first bring 6 cups of water or (or preferably 3 cups of water and 3 cups of pork stock) to boil in a large pot and add bonito flakes. Reduce flame and simmer with lid on for 10-15 min to thoroughly infuse the flavours.
Strain the broth into a large mixing bowl to remove bonito flakes. Return bonito stock to the large pot.
Add dark soya sauce, sugar, crushed deep fried shallot crisps, ground pepper and pre-soaked red meesua. Simmer under medium low flame for 10-15 min. Do not worry that the red meesua would disintegrate.
While the meesua is simmering, bring another small pot of water to boil.
Rinse oyster with brine solution (1 tsp salt with 1-2 cups water) briefly to remove any dirt and bits of shell.
Drain the oysters thoroughly in a strainer.
Coat each oyster individually with a thin layer of potato starch and quickly cook them in the small pot of boiling water until the starch coating turns translucent. Cook for another 10-15 seconds.
Drain and transfer to a bowl of icy water to stop further cooking for 2-3 min. Drain and set aside. Drizzle and toss gently with some shallot oil to prevent the oysters from sticking.
Thicken the meesua concoction with thickening cornstarch water to the desired consistency.
Just before turning off flame, drizzle with shallot crisp oil.
Ideally, keep the pot boiling under very low flame. This helps to maintain the thickened consistency of the meesua. Stir occasionally to prevent the ingredients from sticking to the bottom of the pot but do not do it too frequently.

To serve, ladle a generous portion of meesua into a bowl, add a few oysters and pieces of braised large intestines. Top with chopped coriander leaves and minced garlic, as well as a drizzling of black rice vinegar and dash of ground pepper.

Eat while the meesua is still hot and I guarantee that you would be swept away by the flavours, as what you would have eaten in the streets of Taiwan! 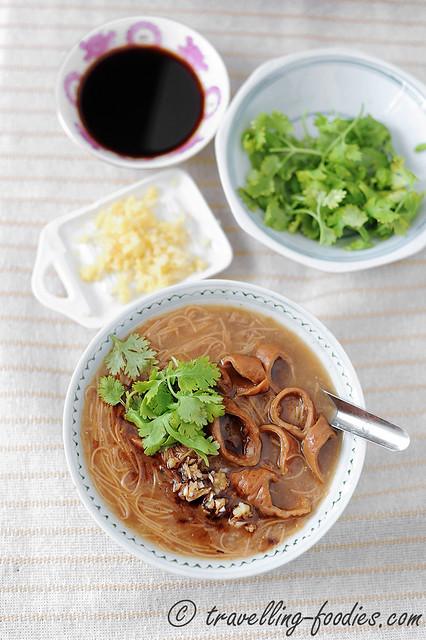 I am submitting this post to Asian Food Fest #10 Aug 2014 : Taiwan hosted by travelling-foodies.