I remember enjoying my first bowl of 四神汤 Si Shen Soup about 10 years back during my initial trips to Taiwan. It was the period before Chinese New Year and my friends brought us to 寧夏夜市 before visiting 迪化街 for the Chinese New Year bazaar. Just gotten off the plane, we hadn’t eaten dinner so my Taiwanese friends suggested going to 阿桐阿寶四神湯 located near the night market first. Being largely a “herbal soup”, it tasted rather plain and smooth, with a lingering sweetness in the mouth. Void of pungent odours and bitter aftertaste, the flavours of Si Shen Soup defies what I had expected Chinese herbal soups are traditionally like. The soup was a relief, not only against the fattiness of the bak chang and large steamed pork buns we had, it also helped to warm our constitution amidst the cold and rainy weather. 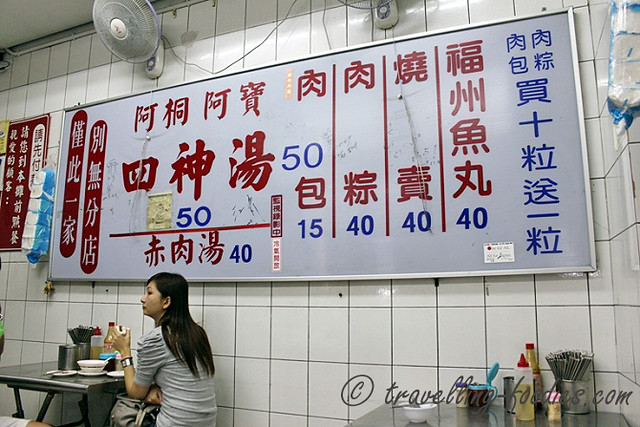 Drinking Si Shen Soup is very much a Taiwanese thing. Because of its relatively mild flavours compared to many other herbal concoctions, it is widely acceptable by the masses be it young or old. Its roots can be traced back to the Fujian province of course but the popularity of this soup in Taiwan most definitely supersedes where it originated back in China. 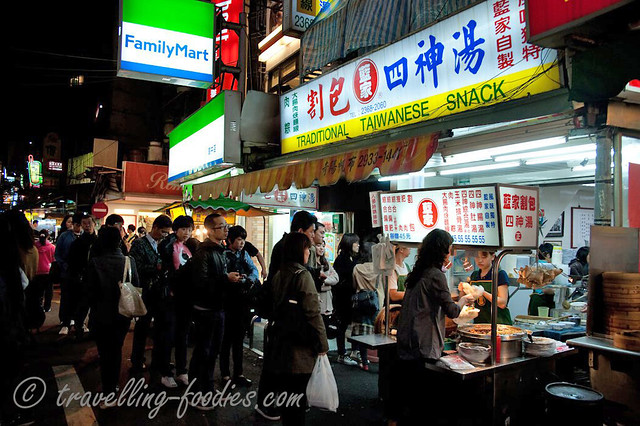 In Taiwan, a Si Shen Soup vendor can be found in practically all night markets and it is always sold together with another meat-based dish. In Taipei, we often see the combination of Si Shen Soup with Glutinous Rice Dumplings wrapped with bamboo leaves called 肉粽 Bak Chang or with Braised Pork Buns called 刈包 Gua Bao. In Kaohsiung and Tainan, Si Shen Soup often accompanies delights from southern Taiwan, like 台南米糕 or 筒仔米糕. Whichever the case, the intentions are the same, that is to use the soup to relieve any sense of cloyingness from eating too much chunks of braised fatty pork. And I must say that the idea is brilliant! 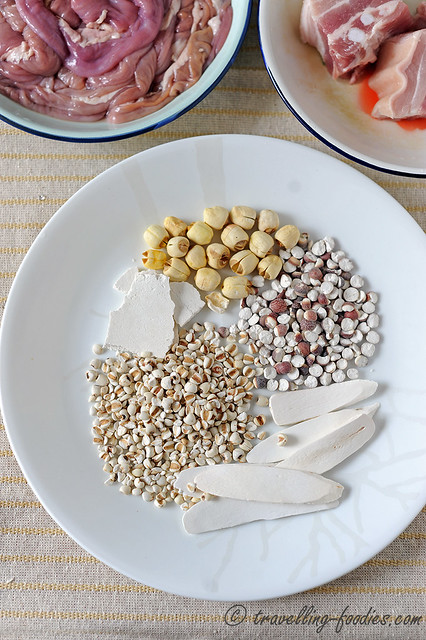 A quick google from English websites featuring the soup churned out rather funny and bizarre sounding results. One website called it “Four Divinity Soup” while another literally translated it as “Four God Soup”. Laugh die me!

The term “四神” (pronounced Si Shen)is actually a homophonic misnomer of 四臣 （pronounced Si Chen). These two terms sound exactly the same in the Taiwanese colloquial tongue (台语) which is derived as a variative of the Min dialect (闽南语) from Fujian. 四臣 refers to the four ingredients commonly used in this soup, that is 淮山 huai shan (aka 山药 shan yao)，芡实 qian shi，莲子 lian zi and 茯苓 fu ling. On their own, they each have their own medicinal properties.

Collectively they serve to 養身滋補、調氣活神, which is why they are called 四臣, i.e. the four loyal subjects, as they help to lend support to those with weak constitution and maintain our well-being, nourish the body, balance the flow of “qi” and invigorate the spirit.

In the streets, most vendors have decidedly done away with most if not all of the traditional components used in Si Shen Soup due to cost consideration and replaced it with 薏仁 Chinese barley aka Job’s tears instead. Despite being considerably cheaper, it too has its medicinal properties.

The soup is traditionally cooked with a pork broth base with lean meat and pig’s small intestines added. But not everyone eats offals so pork ribs can also be used in place of small intestine.

Method
Invert small intestine and rub with flour and salt to clean thoroughly. Peel away most of the fatty membrane on the inner surface. Rinse thoroughly and repeatedly with water.
Bring a small pot of water to boil. Place small intestine in the water for 4-5 min until cooked. Drain and set aside. Use the same water to parboil the lean pork or spare ribs to remove any scum. Discard blanching water.
To a large pot, add pork bone stock or water. Bring to a boil add rinsed Chinese herbs as well as pork and small intestine. Bring to a boil again before lower flame to simmer for 30-40 min until meat is thoroughly soft.
Season with salt.
Remove lean pork and small intestines from soup. Cool down slightly before carefully cutting pork into thick slices and small intestine into 3-cm long sections. Return the cut ingredients back into the soup.
Ladle the soup and ingredients into bowls and serve immediately.

I am submitting this post to Asian Food Fest #10 Aug 2014 : Taiwan hosted by travelling-foodies.