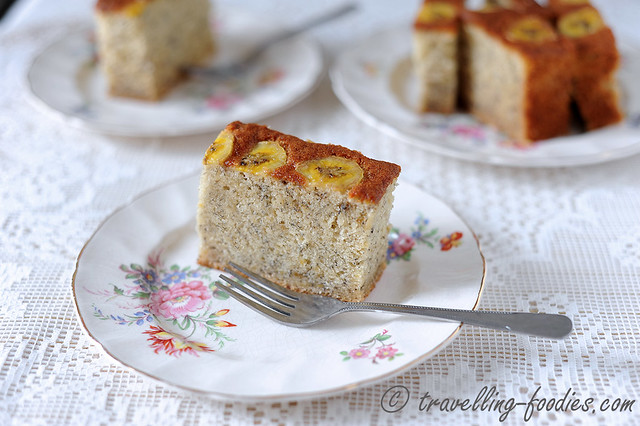 I bake a lot of “Asian-inspired” cakes and bread at home, largely because these are the kind of confections I grew up eating from our local neighbourhood cake shops. Pandan Chiffon remains top on my list and I bake it ever so often for friends and neighbours. Then there are the “coconut” and “otak” buns, sweet dough breads filled with local flavours in both sweet and savory. And of course there is the good old banana cake, requiring few ingredients but so yummy and fragrant. I’d been using a banana cake recipe for over the last 3 years now and repeatedly use it whenever we have over ripened bananas at home which are beyond their prime to be eaten, or simply whenever I have a craving for banana cake. It remains on my “regular to bake” list as the cake is very soft and fluffy and everyone loves it. The results are so consistent and reproducible, given that one follows the recipe and observes the important details well. Otherwise, this banana cake recipe is definitely a keeper and I strongly encourage those who’d not tried it to have a go! 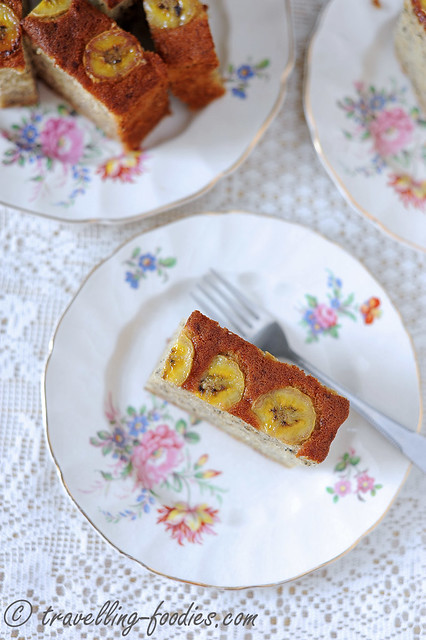 This recipe was shared by a fellow blogger friend Wendy Han who in turn learned it from Richard Goh, a popular baking instructor who conducts classes at neighbourhood community centres. Several of my friends had taken up baking classes with him before. Perhaps I should too, to hone my rusty baking skills! 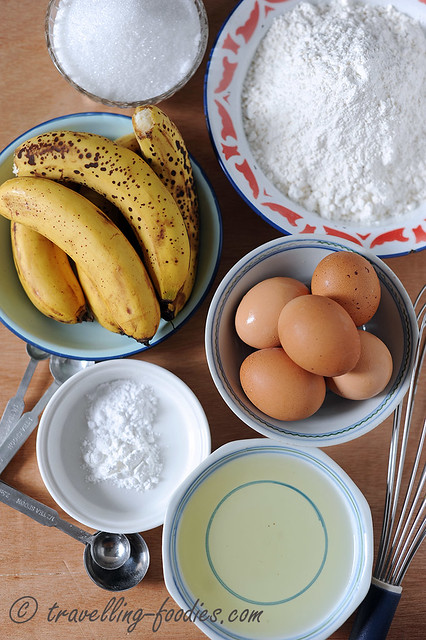 The ingredients list is very short and so are the instructions. One thing important is to go for bananas which are over ripe. Just when you think that their yellow skin has turned brown and punctated with spots which make them much less delectable to eat, over riped bananas are so so aromatic. They go all soft as the starch in them gets slowly broken down into sugars causing them to be so so uber sweet, that make them perfect to be baked in cakes!

Cake flour is also crucial here as it is the low gluten level in the flour that gives them a soft crumbly texture. Low gluten levels in the flour also make the batter more forgiving during mixing, yielding softer and fluffy cakes. So use cake flour for this recipe whenever possible and not plain/all-purpose flour. 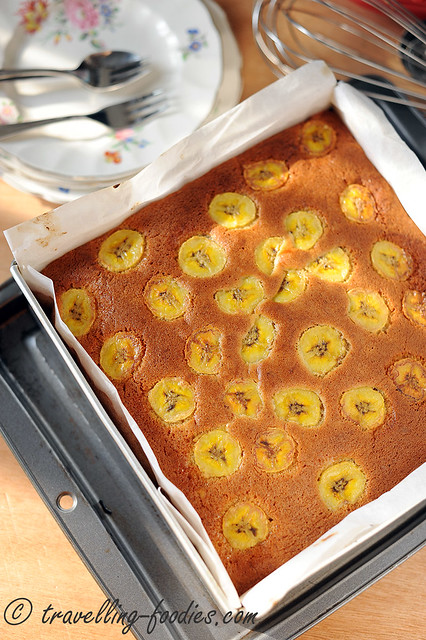 Laying sliced bananas over the top is entirely optional. I love the idea as it adds on a personal touch to the bake, don’t you think? Feel free to omit though as I know some who prefer their cakes to look plain as afterall, what is important is the taste and not so much to how it looks.

As one can see, when properly baked, the cake should rise beautifully, almost doubling in height. Watch the oven settings and the cake would bake uniformly without the top cracking whatsoever. It should also brown beautifully on the top surface from the maillarding sugars in the batter. 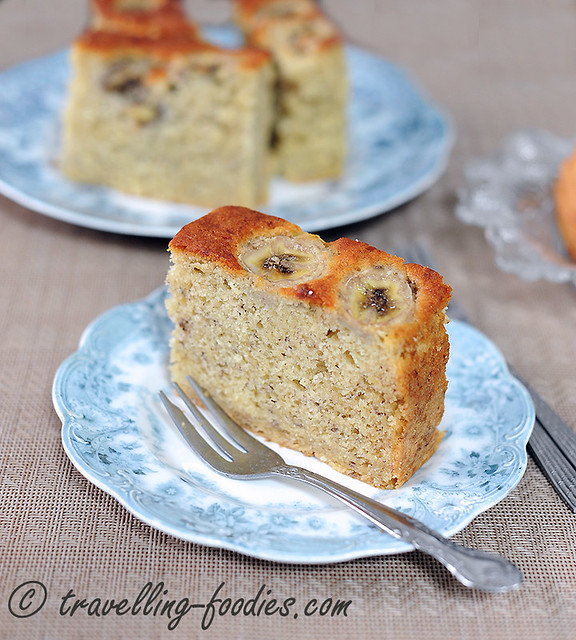 Here’s a slice of banana cake made with the same recipe a couple of months ago. The crumbs are soft and moist to produce a really fluffy cake but as the whole egg method is used, the textures would be less fine compared to a cake produced by the egg separation/chiffon method. The whole egg method on the otherhand is more direct and fuss-free.

The challenging part of this recipe is in the attainment of the ribbon stage for the batter. It takes quite a bit of patience to get there, especially with a handmixer which posed the risks of overheating the machine as the batter needs to be whisk continuously for at least 13 min or so until it reaches the “ribbon stage”.  This is when the batter would flow down continuously back into the bowl when the whisk is lifted from it, without breaking into drips and drops. The continual streams of cascading batter would flop and overlap over each other when they reach the bowl creating the “ribbon-like” effect which lends this technique its name. This can be quite nerve-wrecking for those who are trying the recipe for the first time but just persevere on until the correct batter consistency is obtained. Unlike the egg separation method which requires a meringue to be whipped separately on its own, the direct method using whole eggs is much much more forgiving as there is little risk of overwhipping the batter, unlike the meringue which would disintegrate and become watery when it is whipped beyond stiff peaks. So on the whole, this is a very easy cake recipe to follow.

NEVER attempt this recipe if you do not have a stand mixer or at least a hand mixer. A balloon whisk would not get you anywhere near the ribbon stage required. It would only give you a very badly aching tennis elbow, a deflated batter and probably an equally deflated confidence or esteem level. So if you do not a stand mixer or hand mixer, this is not the banana cake recipe for you. You have been warned. 🙂 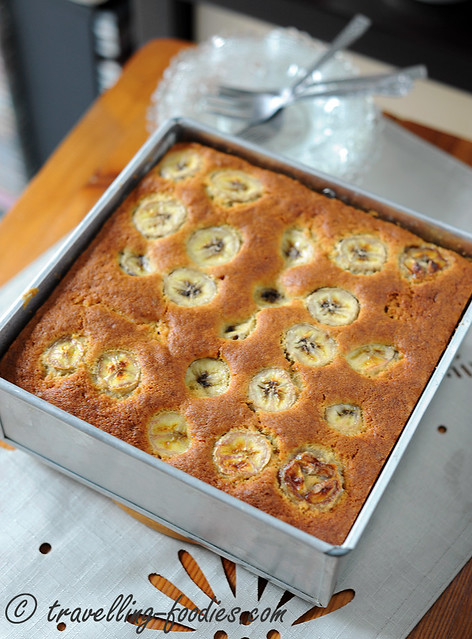 Method:
Whisk eggs, sugar, mashed bananas at medium speed untill ribbon stage. It takes appro. 12-15 min by hand mixer.
While the mixture is being whisked, grease and line a 10″ square tin or a 2 x 8″ round tin with grease proof baking paper.
Sieve flour, baking powder and baking soda together twice and set aside.
Fold in sifted flour in 3 additions, mixing well in between each addition by using either a spatula or hand.
Add in oil and mix well till batter is shiny
Pour into baking tin from a height of 30 cm and tap the baking tin sharply against the work surface to eliminate bubbles.
If using, lay the thin banana slices over the surface of the batter.
Bake in a preheated oven at 160 degrees Celsius for 40-45mins. Unlike the top is nicely brown and an inserted skewer comes out clean.
Remove from baking tray and leave to cook on a rack to room temperature before slicing. 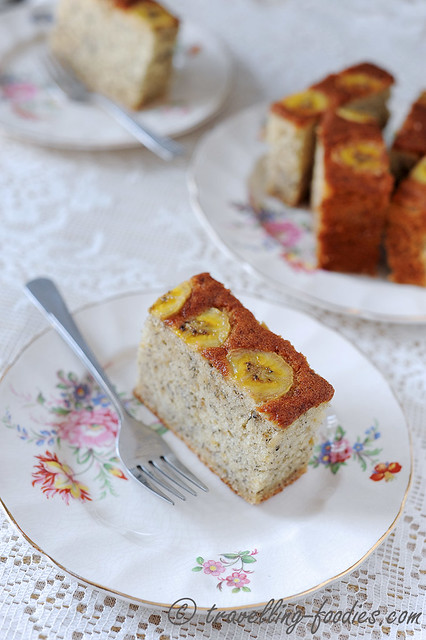 This entry was posted on October 25, 2014 by Alan (travellingfoodies). It was filed under Food, Simple Eats and was tagged with banana cake, cavendish bananas, pisang berangan, pisang rajah, ribbon stage, richard goh, vanilla.