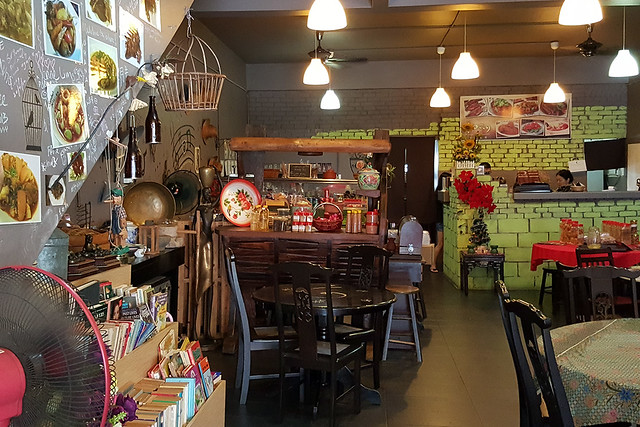 There are many new restaurants and cafes springing up all over Melaka each showcasing their own interpretation of Melakan Peranakan cuisine. For me, that is a heartening thing as it allows us to sample more of how each dish may have slight nuances and variations when they are cooked by different folks. In my last trip to Melaka, I brought some of my friends to my friend Ruby Song’s restaurant, “Nyonya Taste Cuisine” located at the end of Kota Laksamana, just a stone’s throw away from the Jonker Walk shopping district. We were in for a treat! 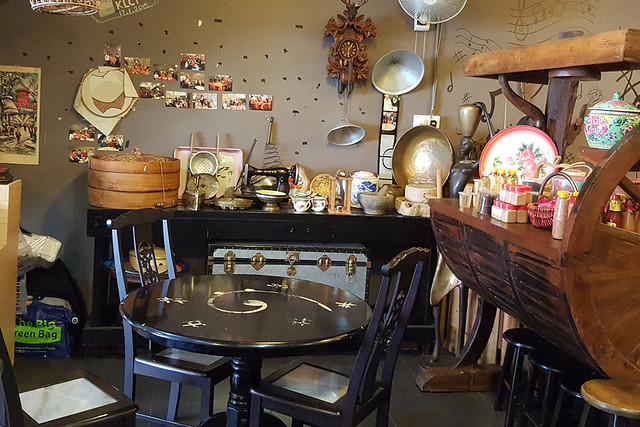 The decor of her restaurant was kept really simple yet dotted with numerous “perasan” which are of great interest to me. Especially her collection of acuan dulu kala (old moulds) for making a wide selection of Peranakan kueh chuchi mulot like kueh bolu, apom berkuah, especially that gigantic gerenseng which is enough to make the inti nenair for kueh tair or cook itek tim to feed a whole kampong! 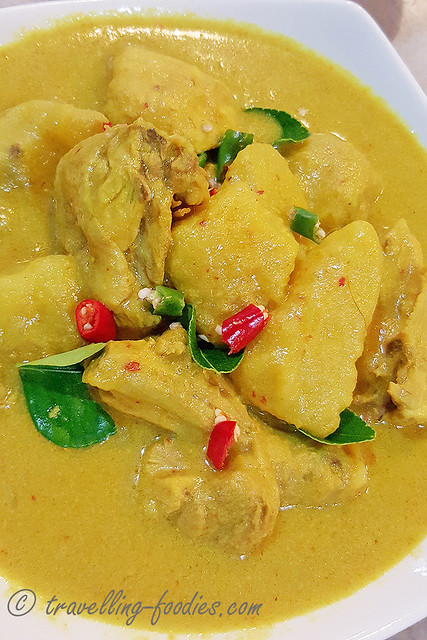 Ayam Masak Lemak Cili Api, this was the first dish that was served and boy oh boy was it good! The chicken chunks were texture, mostly thigh and drumstick cuts and it was interesting because she had added buah sukun to it. Known to the Peranakans as “buah kluweh“, breadfruit adds an interesting textural contrast. The sauce was not as pedas as we had thought it would be but it was definitely chukop lemak! This was when we cried for the rice to be served, as only a generous drizzle of this sauce to go with piping hot steamed rice would do the former justice! 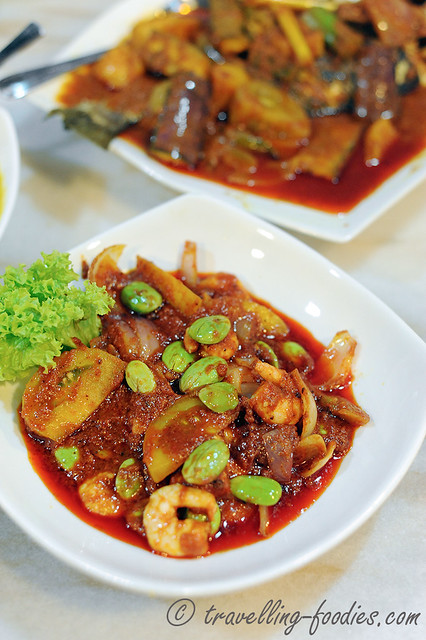 The Sambal Petai Udang was really good though. The sambal was perfectly sauted, though likewise the earlier dish, we would have preferred it to be more spicy. The stink beans are perfectly raw and crunchy as they ought to be, added just moments before dishing everything up. I could eat easily two bowls of rice with just the sambal! 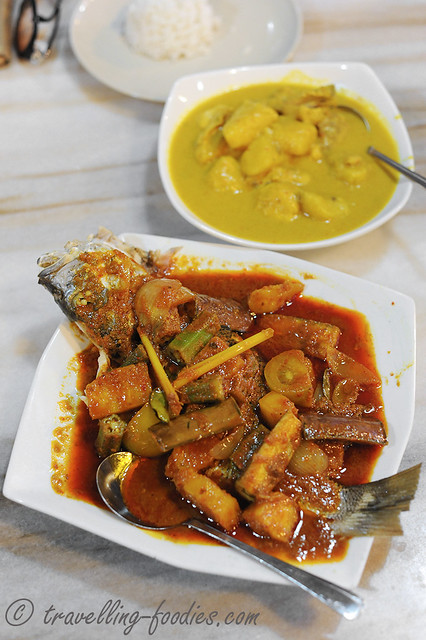 Ikan Gerang Asam with whole seabass. All of us enjoyed this dish as well, chukop asam, chukop pedas and the fish was fresh! It was served with a generous portion of okra, brinjal as what one would find in a good Ikan Gerang Asam. Despite being all spicy dishes so far, the flavours of the first three dishes all had good contrast against each other, demonstrating the subtle differences in the wide repertoire of Peranakan dishes there is today in the cuisine. 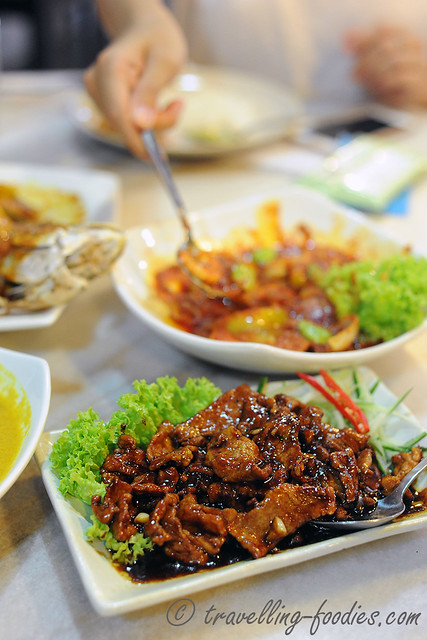 Babi Asam was another dish to whet one’s appetite. It was perfect for the hot day as we were all feeling kind sluggish after a whole morning under the heat. The pork was nicely flavoured though I would personally have preferred it to have been pork belly instead of lean loin. The gelatinous fatty layer would have been lovely against the meat which would have been a bit monotonous if everything was lean. 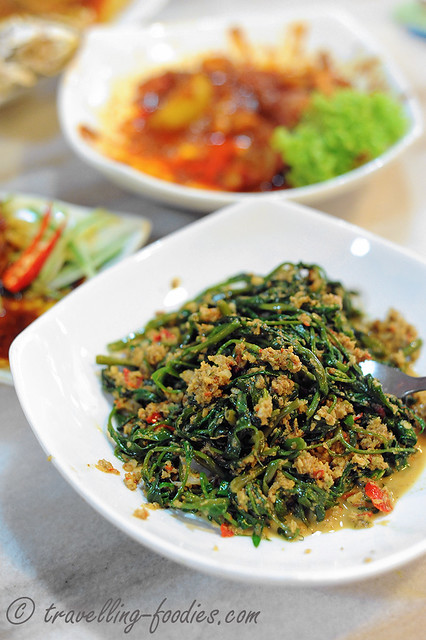 Kerabu Kangkong, finally a vegetable dish which had contrast against the other earlier meat dishes. The version we sampled this time with kangkong is good but I had wanted my friends to try the kerabu which was cooked with young pumpkin shoots instead, but that was unfortunately not available at the time when we were there. I had it just a month back during an earlier visit and the taste was unforgettable. All the more excuse we have just to try the kerabu that was made with daon labu. 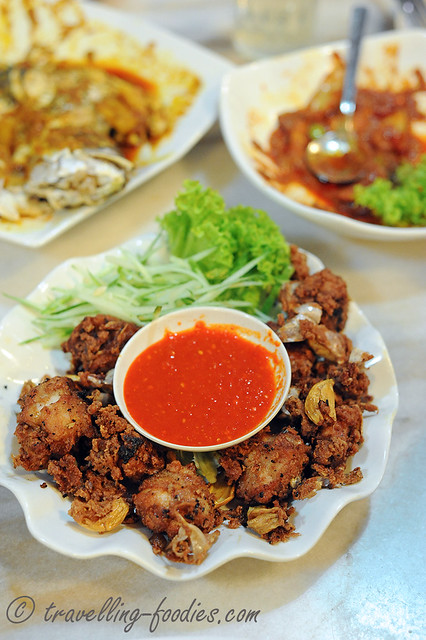 Ayam Goreng Berempah, yet another unforgettable dish I had tried the last visit which I had wanted Ruby to reprise this time round and it certainly did not disappoint. The chicken chunks were moist and succulent while the batter was uber crisp. What made the dish extra special were the cloves of garlic that were fried and served alongside the chicken. This was served with cili chukka and some julienned cucumber and lettuce. This dish is truly finger licking good and I strongly recommend as a “must order” for anyone who visits! 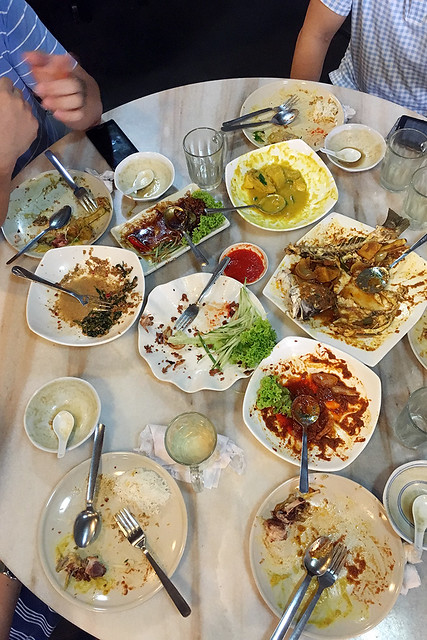 One of the most satisfying meals we’d had so far and the empty plates and filled tummies bear testament to that! And just as we thought we are done with eating, being packed to the brim with food, we were served dessert! 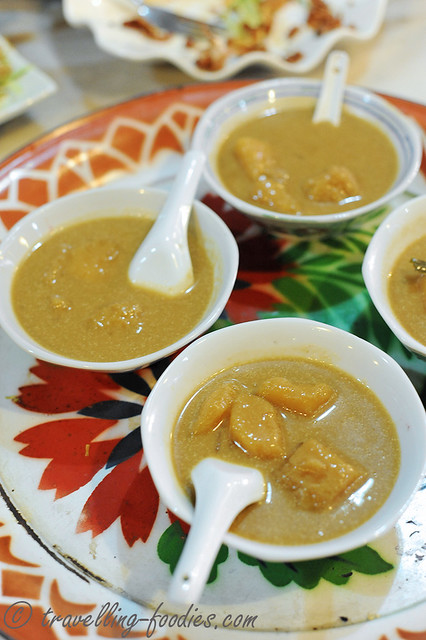 Pengat Sukun was the special dessert of the day, cooked with the seasonal breadfruit. It was surprisingly light for a pengat but we aint complaining as it was just nice as a chuchi mulot after a hearty meal. 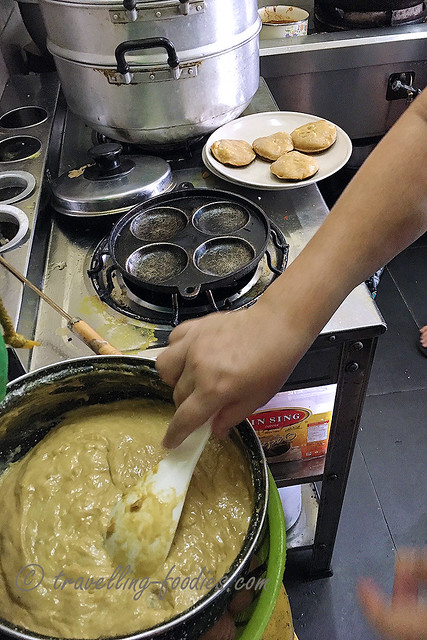 And just as we were about to leave after settling the bill, Ruby gave us another surprise by preparing apom balek for us. I couldn’t resist stealing a glance into her kitchen as she makes them, to learn a trick or two. 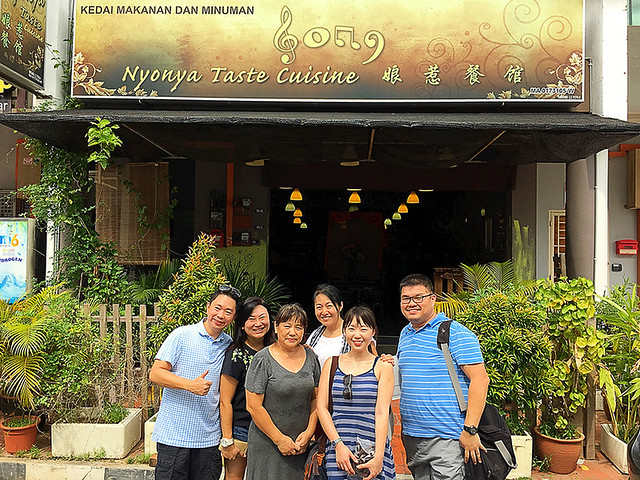 A parting shot just outside her restaurant, thank you for your hospitality, Ruby!

This entry was posted on October 12, 2016 by Alan (travellingfoodies). It was filed under Food, Travel and was tagged with baba nyonya cuisine, melaka, Peranakan, song nyonya cuisine, straits chinese.