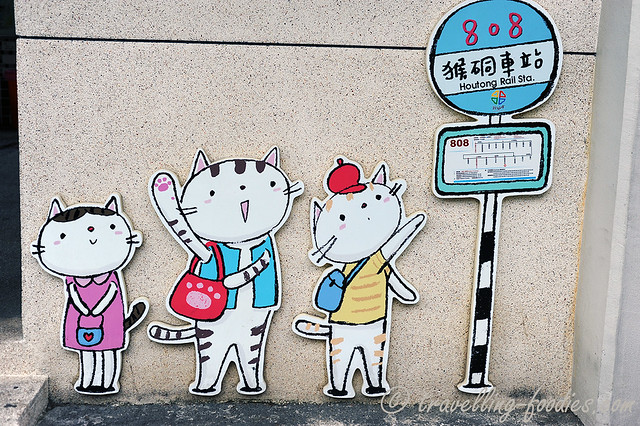 Houtong is a small town nested near the northeastern coast of Taiwan. Named so for the populous colonies of macques that once made this place home, along the cliffs. Numbers have since dwindled but you can still see them around. But folks ain’t here for the monkeys. The main attraction here now are the cats! And I can’t believe that this is our first time here despite having been to Taiwan more than a dozen times! 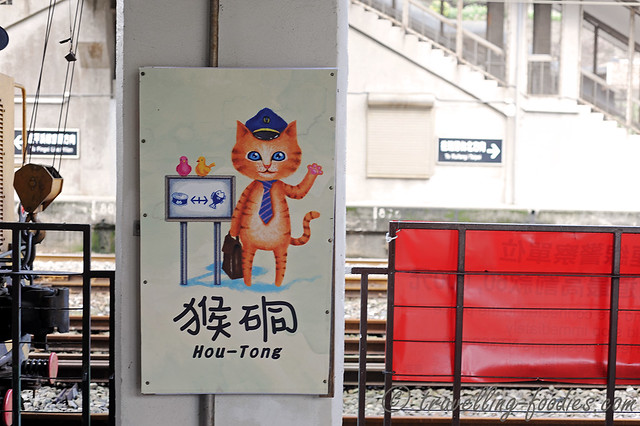 Houtong, along with the other small towns like San Diao Ling三貂岭, Ping Xi 平溪 and Shi Fen 十分 along the railway that connects the larger Ruifang county to Taipei City, was known to house the families that worked in the nearby mines. Coal mining was the main commercial activity and source of livelihood for the families here for many decades until the late 1970s to early 1980s when the productivity decreased drastically, as well as several major mining catastrophes in Taiwan, i.e. 七星煤矿事件 and 海山煤矿事件 that prompted the KMT government to put a haul to all mining activies throughout Taiwan. Without the source of income, most folks switched careers, shifted away, except a small pocket of families that still lived around the railway stations. 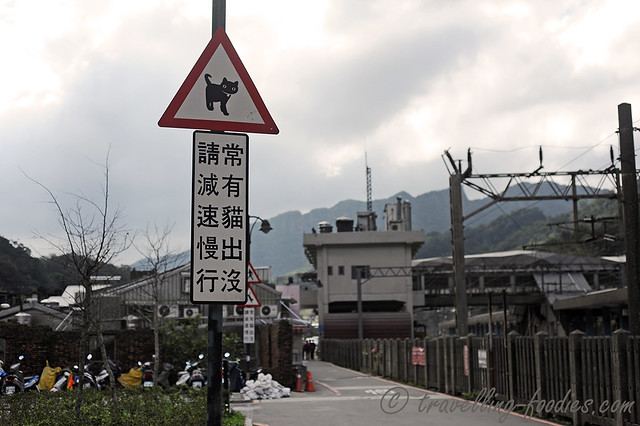 Without the humans, the cats both domesticated and strays quickly became abandoned and it wasn’t until 2008 when a cat aficionado who stayed around to feed and care for the cats started constantly posted photos of the felines on social media did it capture the attention of the masses. Rumour has it that there are literally hundreds of cats left in Houtong but we didn’t see that many when we were there. Nonetheless there were quite a few dozens around which provided excellent photographic subjects! They are quite accustomed to humans as well it isn’t difficult to get friendly with them! 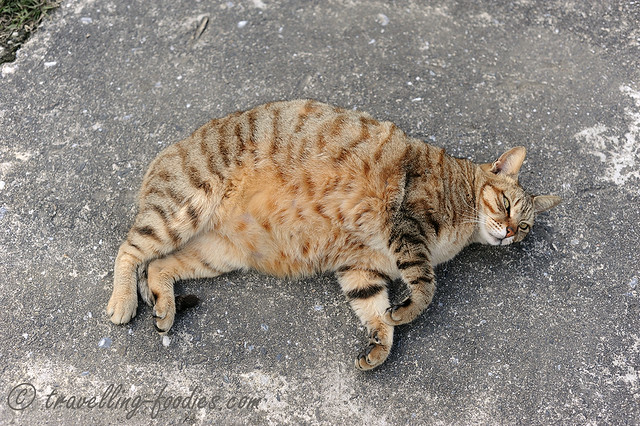 They are pretty well maintained, as one can see from this rather plump fella here, basking under the sun in the cold weather, begging for a tummy rub. 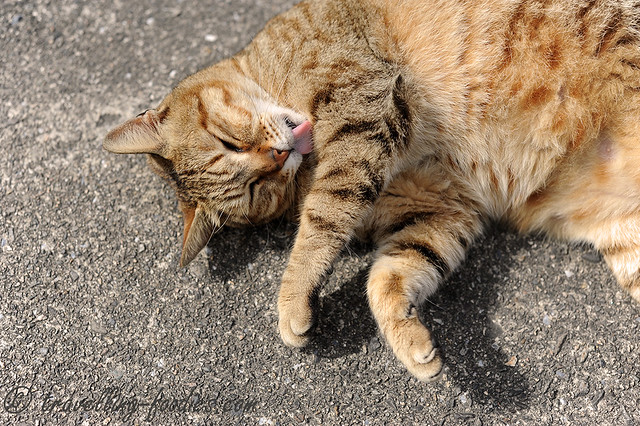 Cats are generally very clean animals, constantly grooming themselves。 But those with fur allergies should still be cautious about maintaining a friendly distance. 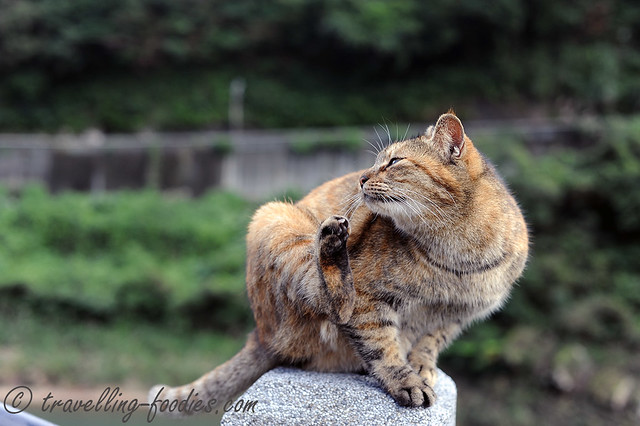 Some of them would approach us, in hope for little treats, cooing and purring along the way, not forgetting the customary leg rubbing and calf circling to get affectionate and probably scent marking as well. Then there are some who do much about nothin’, simply minding their own business with a couldn’t care less attitude to all the humans who are going gaga with their other feline friends.
a 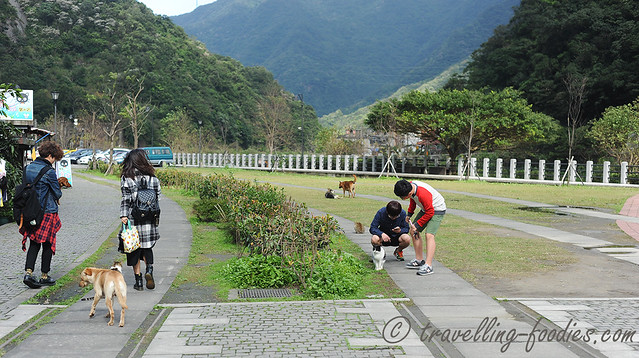 There are wide open spaces, next to the open air carpark where the cats roamed freely. Many of them could be spotted within the carpark itself, couped up under the engines for that little bit of residual heat… 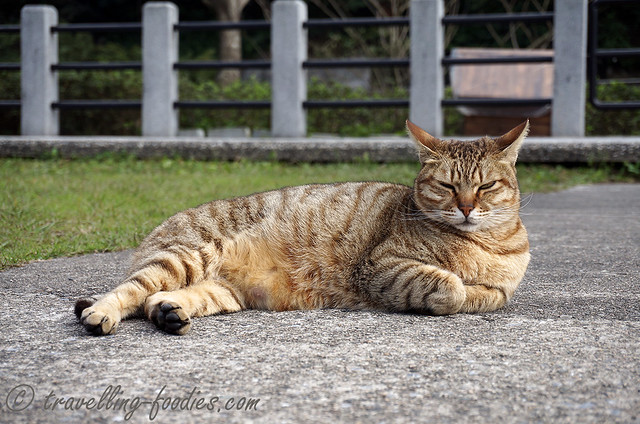 Slitty eyes with that “watcha lookin’ at” look…. not gonna even try to get fresh and friendly with this fella… no siree! 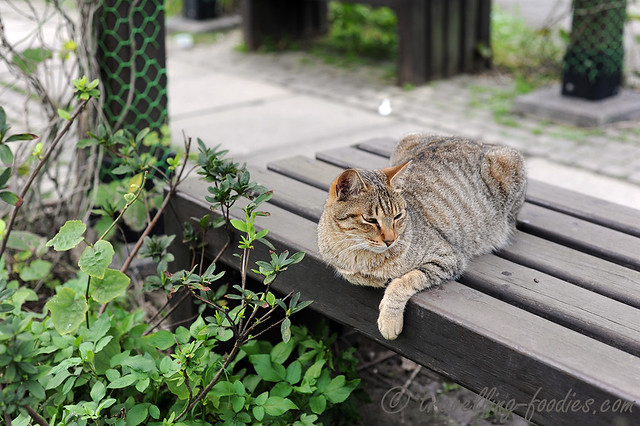 Some just look very very composed and demure, watching the world go by or just daydreaming… 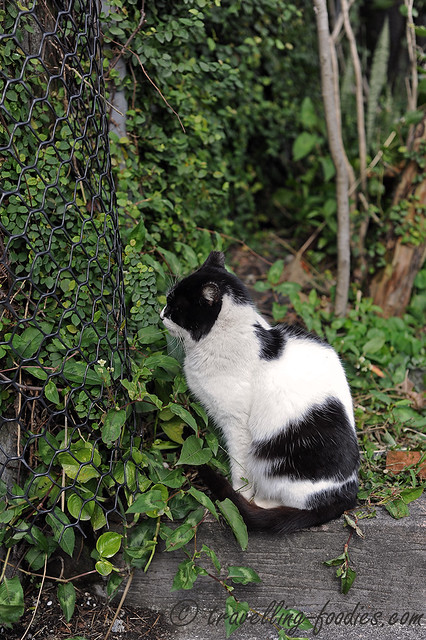 Some fellas were kinda goofy, like this one staring into blank space across the fence crawling with greenery. Perhaps it can see activity going on on the other side which we can’t. *gasp* 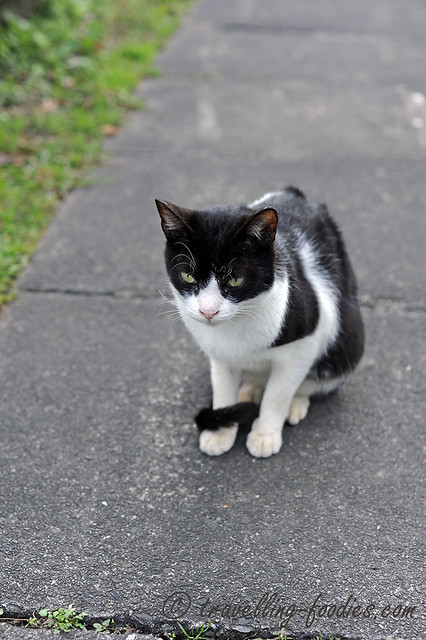 And this is a shy little fella, rather small sized and probably low ranking in the pecking order with its tail tugged under its feet. Yes it is pretty obvious that the cats here have some kinda social hierarchy amongst themselves. Some would deliberately steer clear off the paths and go into the bushes when the larger and more boisterous looking fellas are “doing their rounds”, in hope to get fed by the humans first. Kinda empathise with this fella. Gambate and grow up soon! 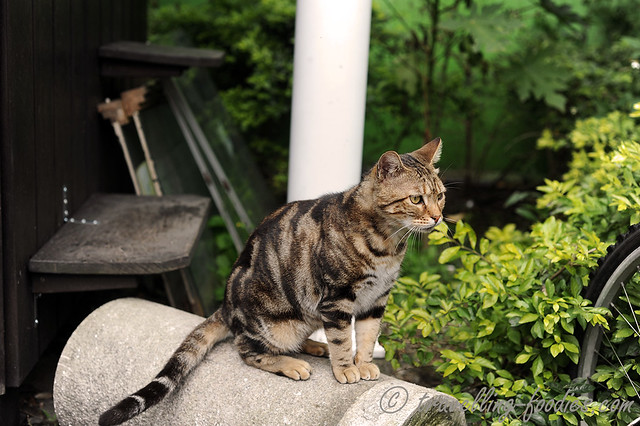 And here’s a pretty fella, probably has a Bengal Cat whom he calls grandpa or grandma along his ancestry. Pretty aloof as well who couldn’t care less about us, only interested in chasing after little rodents, albeit kinda futile.. 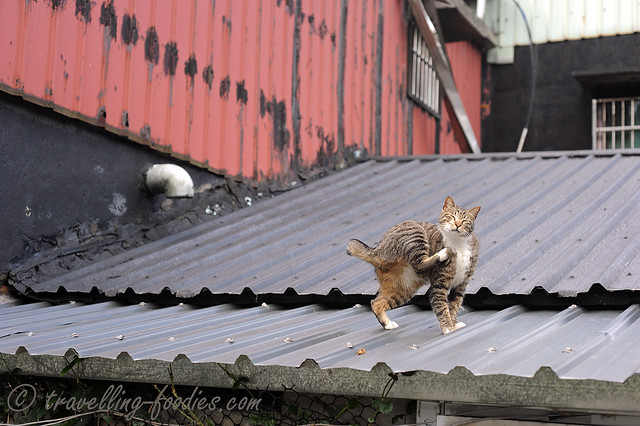 And this is a funny fella whom we stalked for quite a while, she being up on the roof while we on the ground of course… Scratching herself all the time, maybe a flea problem? 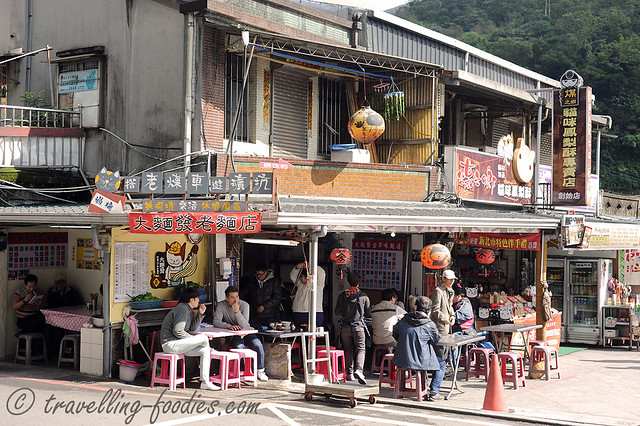 Had enough of cats already? One can stop by one of the small eating delis just outside the train station. A bowl of hot noodles would have been great, though we didn’t as we were running late on our itinerary.. 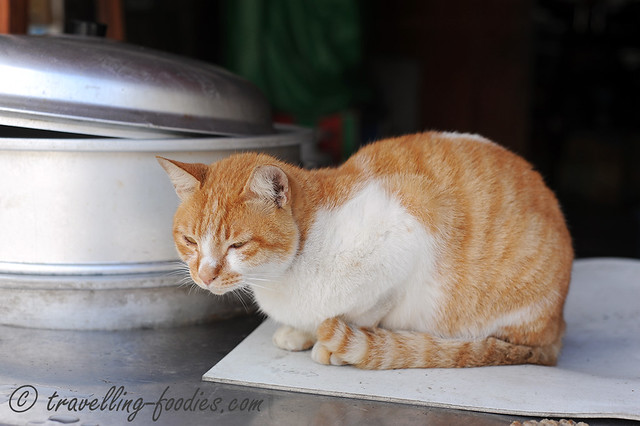 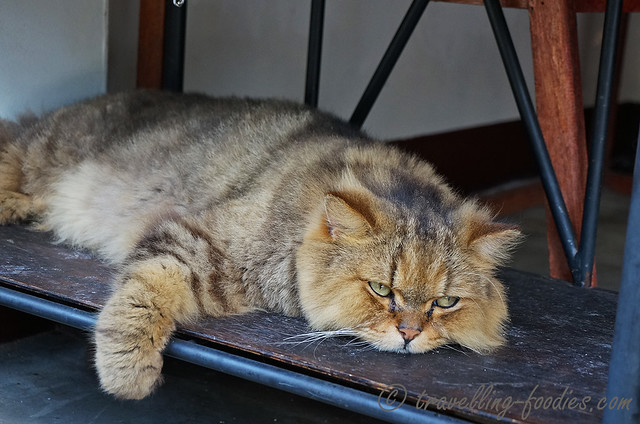 Every shop seemed to have their own residential cat, somewhat a mascot of some sort. This badass lookin’ fella happily pronged itself outside the walkway of another souvenir shop… 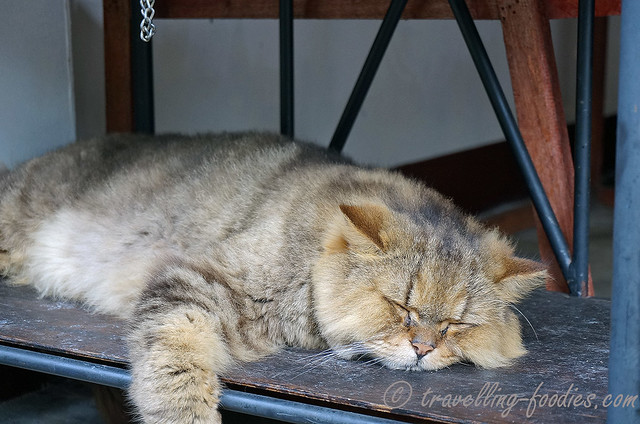 It took a look at us, and promptly returned to his siesta, seeing that we have no treats in our hands…even cats can be quite pragmatic to the point of being cruel and mercenary… 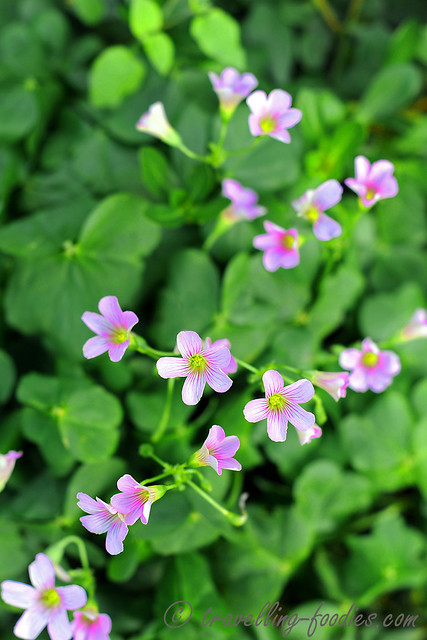 Apart from fauna, there are also plenty of flora in the parks and walkways. Lotsa of photography opportunities as long as you know where to look… 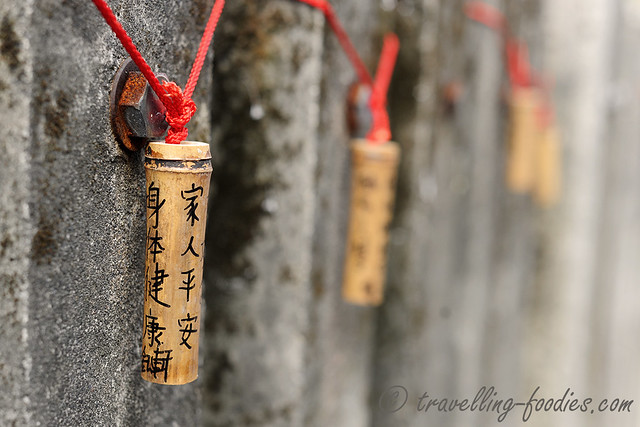 And this is one of my favorite shots for the day. The local trend seem to be hanging bamboo segments with wishes inscribed or written on them, much like how emas are used in Japanese shinto jinjas. You can see this especially in Pingxi where the lanterns are released into the skies… “家人平安，身体健康” yes indeed…

The easiest way to get here is to take a local train from Taipei Main Station to Ruifang station and change to the PingXi line. Hou Tong is just one stop after Ruifang though most folks would include other attractions like Pingxi and ShiFen as well in their itinerary since they are already here. The former is famous for the releasing of “sky lanterns” 天灯 while the latter has a rather majestic looking waterfall. There were only small groups of people when we visited over a weekday late morning. So try to do likewise and avoid the weekends unless you wanna be clamouring to take photos with the cats together with the tourists.

This entry was posted on October 26, 2016 by Alan (travellingfoodies). It was filed under Travel and was tagged with cat village, houtong, pingxi, ruifang, Taipei.