Singaporeans having finally caught on the Japanese food bug head on now. All these years there had been a steady fan following on Japanese cuisine here but over the last two years, we saw an explosion of Japanese-themed restaurants opening up not only in the major malls but also in the heartlands. Some of these big chain names from Japan were invited as anchors and crowd-pullers but we also noticed delightfully some gastronomic ventures by locals as well. Tendon seems to be the craze now and and just a bit earlier, udon-yas and menyas. So are donburi-like rice bowls which have sought to be creative with their topping-to-rice combinations instead of sticking to conventions.

Tsukiji Fish Market @ Orchard Central is one of the latest kid on the block which opened for barely 2 months now. It took over the same space where “Sumiya” once occupied on the Sky Garden at level 12 of Orchard Central. Diners can order not just from one but numerous “restaurants” sharing the same roof here, each having their own area of specialisation, a mini version of a “food town” concept which is not unfamiliar to us. 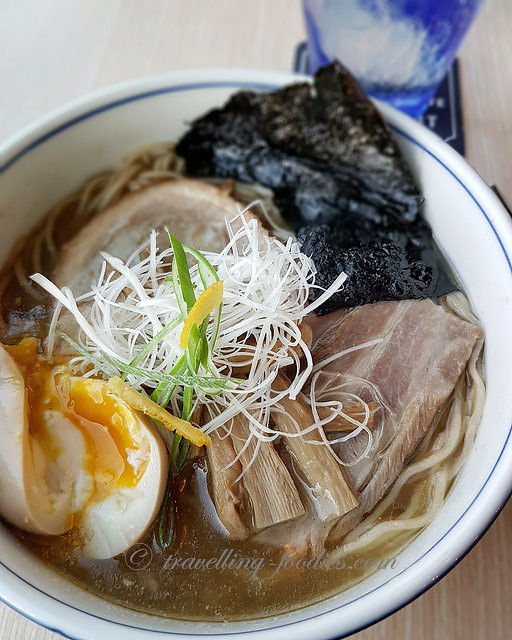 There is a Takumen Ramen Gallery which offers a range of ramens from several reputable menyas which have made their way into the Tokyo Michelin Guide. We opted for the “special ramen” from Bigiya which is a Michelin Bib Gourmand recipient. Unlike the more robust tasting Hakata-style tonkotsu broth base, Bigiya specialises in ramen with a shoyu soup base which is incidentally also the oldest form of ramen. 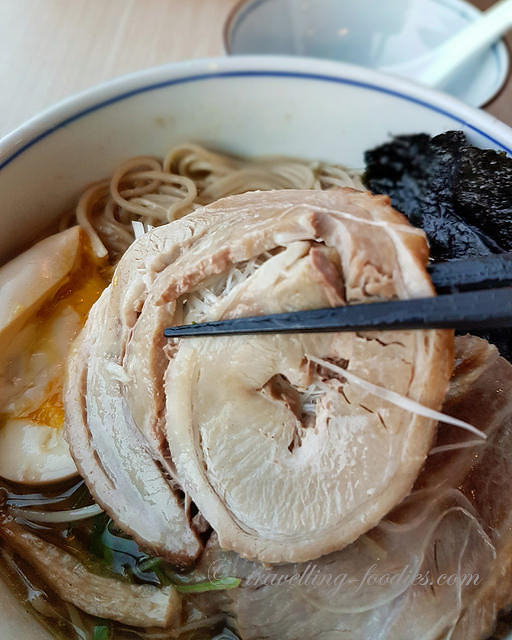 The “special” ramen differs from the standard “Ajitama” bowl with more toppings. That means more char siu and more menma specifically while the other condiments remain more or less the same. If one is hungrier than usual, one can opt for “大盛” bowl which has a double portion of noodles. I’m not sure if there is an option for 替玉 though where noodles can be added later to the remaining soup.

There are two types of char siu served in our bowl of ramen, one of which is “standard” braised pork belly which had been rolled up into a roulade. The slices were wonderfully flavoured and the texture was good, braised and soaked down to the right softness without disintegrating into the soup. It would be great if the skin was “aburi-ed” though.. 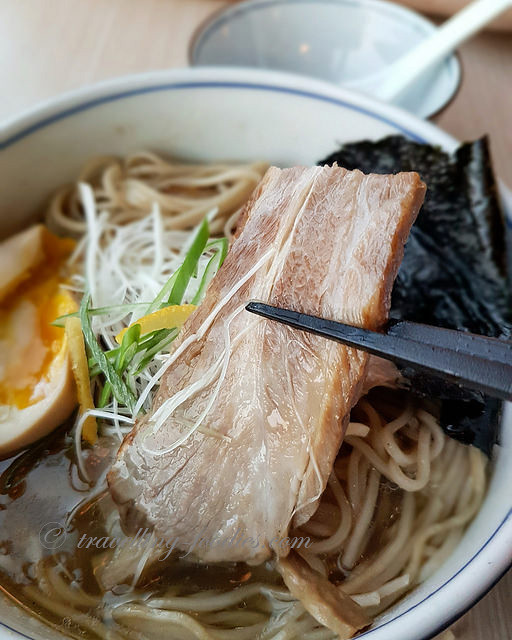 The second type of char siu has a more ham-like texture that resembles beautifully cured or aged meats which I enjoyed tremendously. Slightly chewy compared to the rolled up version and the fat has taken on an almost gelatinous texture. The contrast in the textures the two types of char siu offer lent the bowl of ramen more complexity and depth. 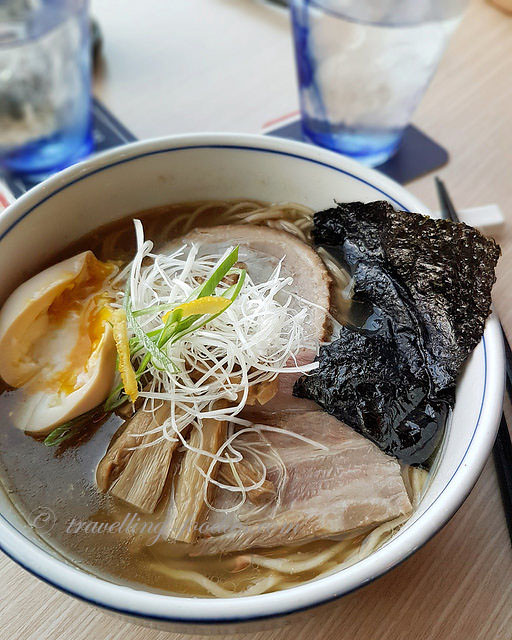 The other toppings was pretty standard in shoyu ramen. Menma for the crunch and I love the finely julienned negi. The slivers of yuzu rind added a citrusy zing and was refreshing to the bite that helped to cut through the savory flavours of the broth. The broth itself was also well concocted. Compared to some other shoyu-based ramens I have had, even the “famous” joints in Japan,  Bigiya’s shoyu broth tasted milder and more “gentle” to the palate. It is by no means “watered down”. I think the Japanese term “yasashii” would describe it rather well. I liked it enough to take a few mouthfuls of the broth though it is customarily not to do so, especially for shoyu based ramen. It was regrettable that the ajitsuke tamago aka ajitama wasn’t cut properly and looked “defaced” when the bowl was served. That was a bit of a letdown honestly. I would rather that they left the egg intact than to have defiled it. 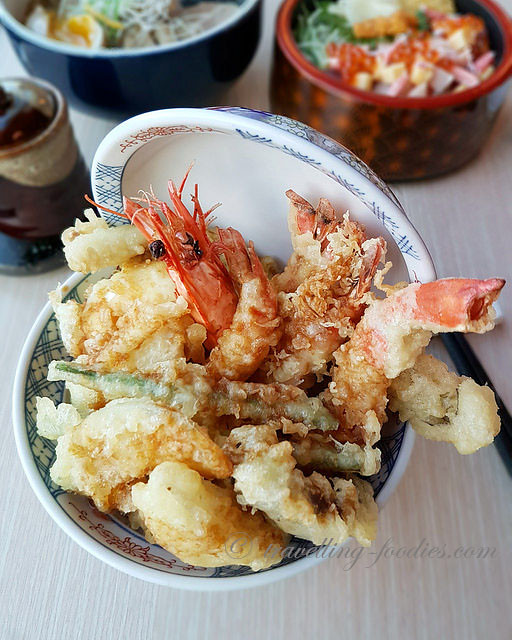 We ordered the “Ebizo Special Tempura Rice Bowl” to share. The donburi was laid with steaming hot Japanese rice overflowing with an assortment of fried items from live prawns, sea eel, crab stick, squid, half-boiled egg and mixed vegetables on top… What a sight to behold when it was served but how did this bowl of tendon actually fare? 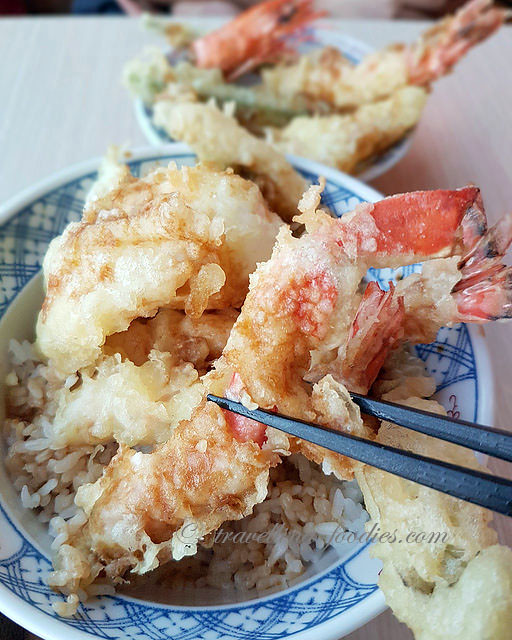 First the good things. I was pleasantly surprised to find out that the “crab stick” was the real deal, with the baton of king crab leg still lying partially encapsulated in its exoskeleton before being battered and fried. This sure beats the surimi stuff we get at other tendon joints around. I also liked the fresh prawn head placed ceremoniously amidst the other fried items. It was more than being merely ornamental as it was packed with that rice yolk-yellow nugget of gooey fat trapped within, the very essence which I would be more than glad to suck out of. The battered squid was decent too though I found the ratio of mixed vegetable tempura on the low side. Only half a shiitake mushroom tempura instead of thick and fleshy whole ones we get elsewhere, thin french bean tempura which looked kind of misplaced amidst the other more boisterous looking pieces. The onsen tamago tempura did well too with the lava-like yolk still beautifully runny when we cut into it. The piece that fared worst was incidentally the star of the bowl, the anago 穴子 tempura. The eel was not as fresh as it really ought to be, tasting and smelling fishy as we bite into it. Definitely no where near Kaneko Hannosuke‘s version … The other disappointment lies with the drizzling sauce actually. It was just plain salty and nothing more to offer. I think more can be done to make the sauce compliment the tempura pieces better, be it the quality of the shoyu used or the concoction of other ingredients added. Kohaku’s tendon fare better in this aspect. Quite a shame for Ebizo’s rendition really… 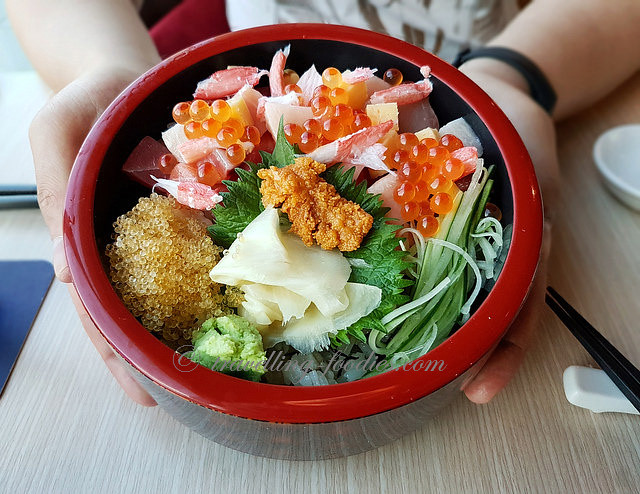 We sampled the special bara chirashidon last as the springy textures of the ramen and the crispness of the tempura could not wait… Again, the presentation was really alluring, splash of colours, interplay of textures making it in current social media context, very “IG-worthy”… 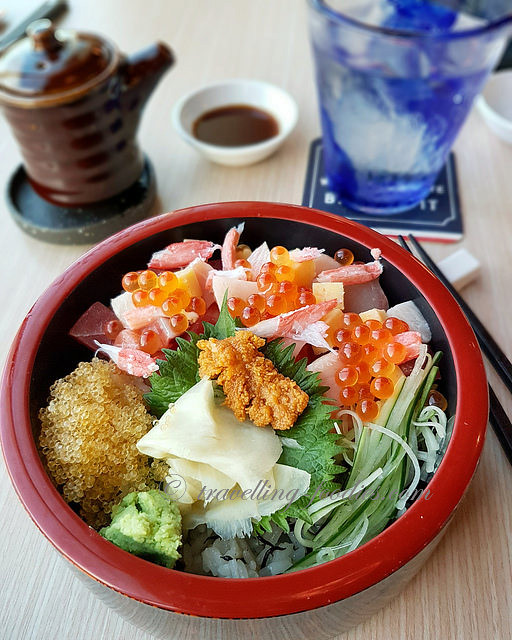 The 雲丹 uni which are the gonads of the sea urchin used wasn’t fresh uni out from the spiny shells but seems to have been processed and bottled via the “shu-tou” 酒盗 technique by soaking the pieces of uni in konbu-shoyu (kelp-infused soy sauce) which helped to preserve and accentuate the umami flavours while retaining most of its creamy textures. I don’t mind this at all compared to some other so-called “freshly air flown” uni which didn’t taste fresh at all. The flavours are largely there and most importantly it was void of tasting vile which we get when the sea urchin roe is “off”.

The rest of the “bara chirashi” toppings are pretty much standard like ikura, maguro (akami), salmon (sake) etc. The seafood tasted reasonably fresh with some shreds of kani lending some subtle sweetness. Our particular bowl has quite a bit of swordfish though, not a type of sashimi we particularly fancy but that is all a matter of personal preference. The sushi rice at the bottom was tossed with hijiki for palatal contrast but we thought the rice on the whole was underseasoned. Not enough vinegar to cut through the umami flavours offered by the seafood topping, so in short the “kick” wasn’t quite there.

Joke of the day was with the golden tobiko (flying fish) roe which the waiting staff mistaken for “salmon roe” when I enquired. Yes, I like to give little pop quizzes whenever I visit a new restaurant. 职业病 I guess… That said, it is not only the food that makes a restaurant good but also the quality of the staff as well, both service and product information wise. I quickly asked what is “ikura” then to which he replied “oh salmon roe comes in different sizes”. Sensing my doubt in the quality of his answer and probably that dramatic look of bewilderment on my face, he quickly added that he will go check with the chefs and promptly scurried back to the kitchen, returning 5 minutes later to correct and perhaps redeem himself, with the correct “answer”. I merely smiled broadly and continued digging in… 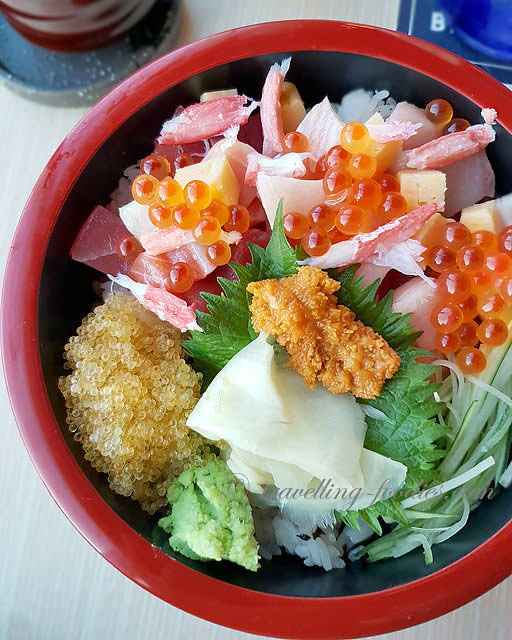