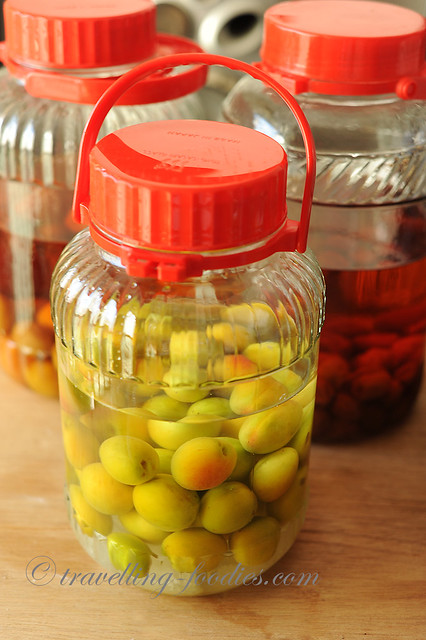 I love umeshu and I think a lot of you love it too! The standard brand we get off the shelves at wine shops, supermarkets and even at airport DFS is “choya” but you will find that it is quite common for Japanese households to make their own umeshu. It is a process which requires few ingredients and most importantly, doesn’t require a brewery or distillery! It is a simple act of infusion and steeping, which I have been doing for the last couple of years now, so this post is a collation of my journey and experience in making umeshu at home and I am here to share it with you… 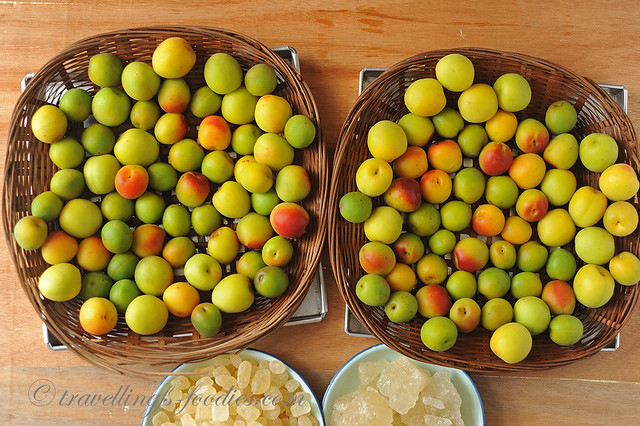 First let’s talk about the source and choice of plums to use. While we get a good range of plums, apricots and other stone fruits here in Singapore, the choice of plum to use are the Japanese green plums 青梅. The best of the lot are nankobai 南高梅 from Wakayakama 和歌山, famous for their fruit seasonal produce throughout the year. When they are nicely ripen, they are yellowish green with a hint of reddish blush and smells incredibly aromatic…. kaorrriiiiiiiiii!!! This batch in the photo above are really beautiful which I lugged back from Japan a couple of years back. 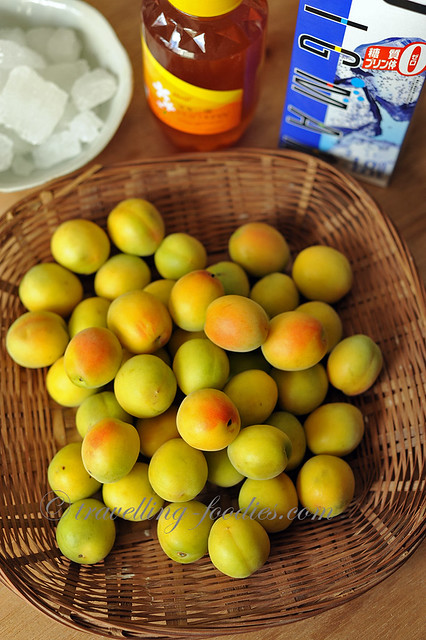 And this is this year’s nankobai. They were green when I bought them so I let them blet slightly under room temperature conditions for 2 days before using them to make umeshu. This induces the plums to ripen slightly more and thus become more fragrant before being used to make umeshu… 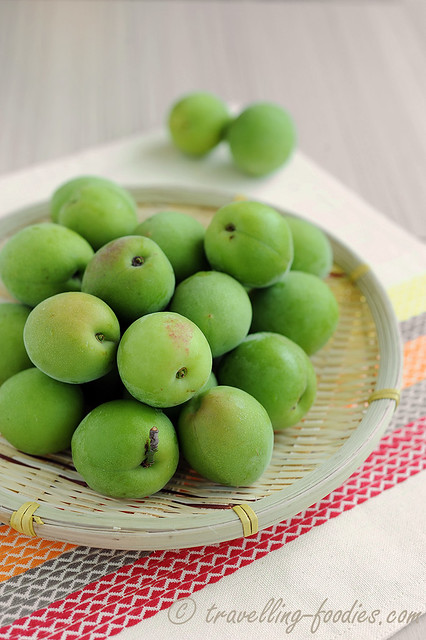 This is another common type of Japanese plum used to make umeshu. They look a lot more green than nankobai even when ripen and are a tad less fragrant. This batch was from one of my later trip to Japan and can be found in Taiwan as well… 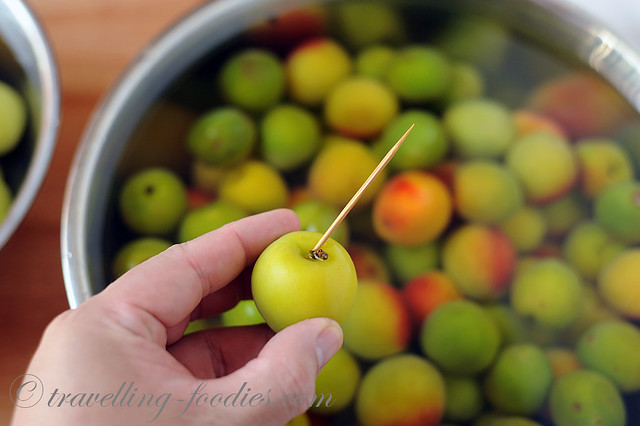 The plums need to be sorted out before being used to make wine. Discard any plums which are heavily bruised with the flesh within being exposed. They need to be remove or the umeshu produced would look murky. After giving the plums a good rinse, they are soaked for a short while (20-30 min) in water. The stalk caps are also removed with a toothpick or scribe as they would cause the wine to become bitter. After the soaking and removal of the stalk caps is done,  the plums need to be dried reasonably before they can be bottled. 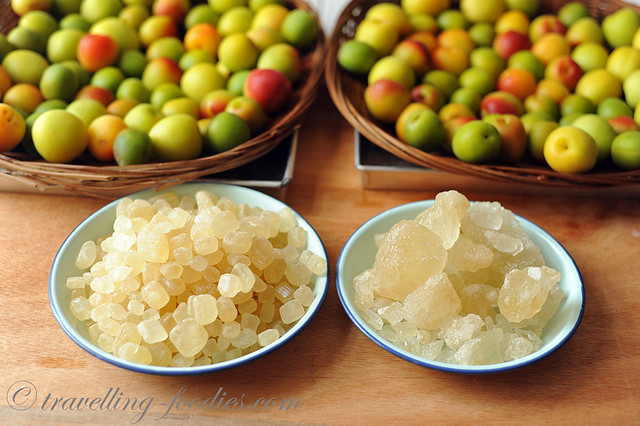 Now the sweetening agent… rock sugar is customarily used. Raw or refined some of you may ask… well it is a matter of personal preference really. I have tried with both raw and refined versions and honestly, the difference was hardly noticeable, save for the colour of the umeshu produced by the former being a shade darker amber than refined rock sugar. 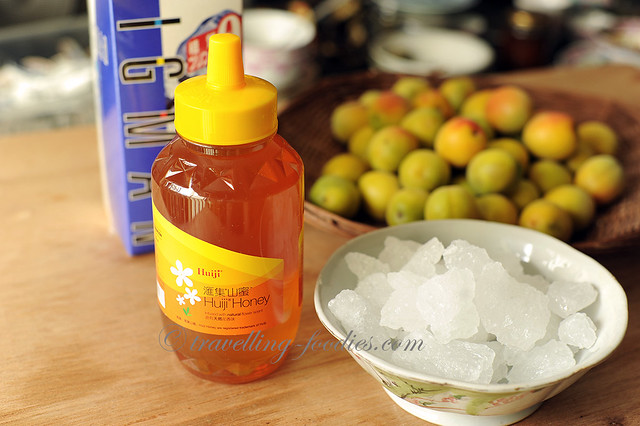 Otherwise, honey can also be used. I would do partially replacement only of the rock sugar and not as a complete replacement. Also use a variety which tastes milder so that the aroma and flavours from the plums would still come through nicely. Floral blends work well and avoid very robust tasting ones like longan honey or manuka. For substitutions, I would recommend a 50% substitution of rock sugar with honey though do take note that the weight of the honey used should be 80% of the sugar substituted. For example, if 1kg of sugar was used in the original recipe, a substitution would use 500g of rock sugar with the other 500g being replaced with 400g of honey. Then again, this is only a guideline as the flavour intensity of honey varies from one variety or blend to another… 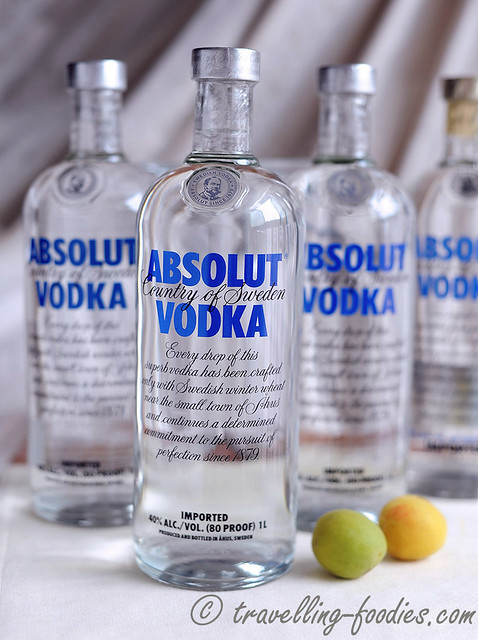 Then comes the choice of liquor to be used as a base. The standard Japanese umeshu uses shochu though practically any hard liquor with a minimum of 25% alcohol content would work. That said, we should refrain from choosing a liquor which is too strong tasting, e.g. rum or whisky etc. Vodka works well incidentally, though with it, I would increase the amount of sugar usually. 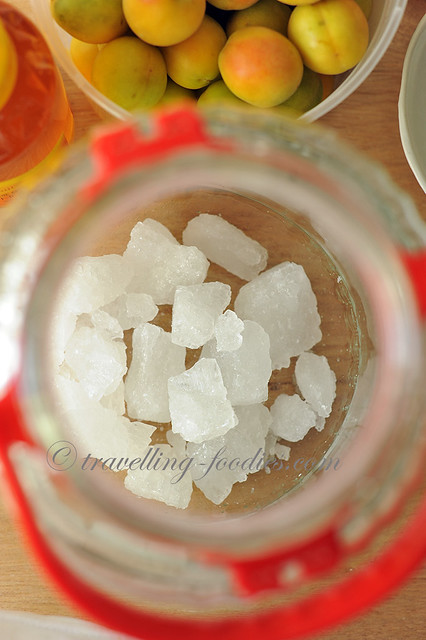 Next comes to process itself… which to start first, rock sugar or ume, honestly it doesn’t matter because if you have made umeshu before, you will notice that within the first couple of weeks, the plums would all float onto the surface before settling again. For the batch in the photo above, the rock sugar went in first… 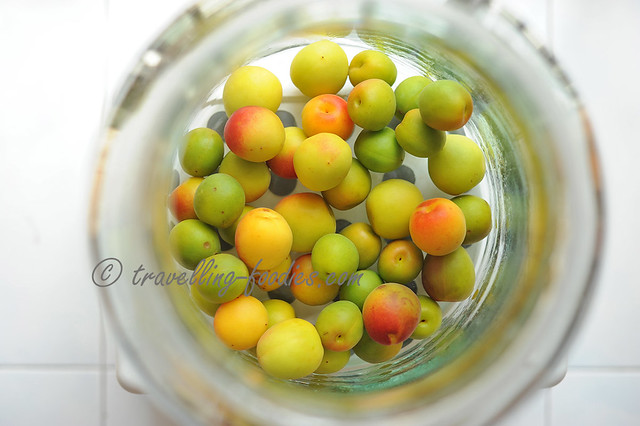 While in another batch I’d made, the ume went in first… it doesn’t really matter. 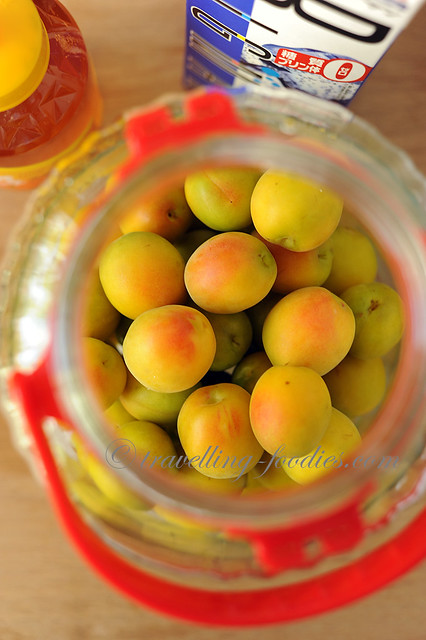 It is good to layer the ume and the rock sugar alternately as advocated by most other sources of umeshu making but very very honestly, I don’t see much of a difference… 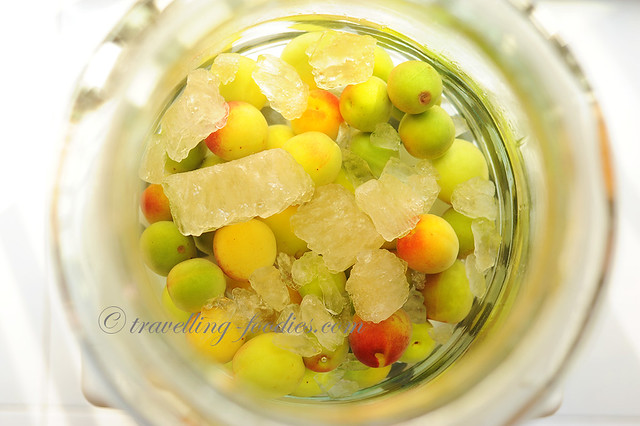 But I find it useful to top it all with rock sugar instead of the plums. The weight of the former holds the fruits down to keep the latter submerged during the initial soaking period, before the rock sugar dissolves that is…. this is done in hope that the soaking process would occur more effectively.. 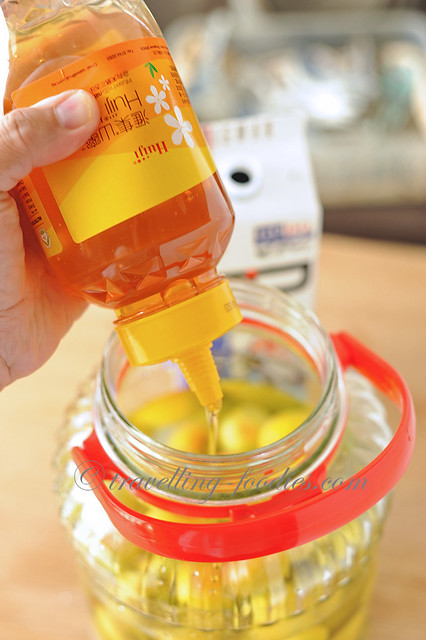 And finally if honey is used, it could be introduced on top…note the ratio of honey to rock sugar mentioned above as a guideline but do allow some flexibility to factor in sweetness of the sugar/honey and personal preference as well. 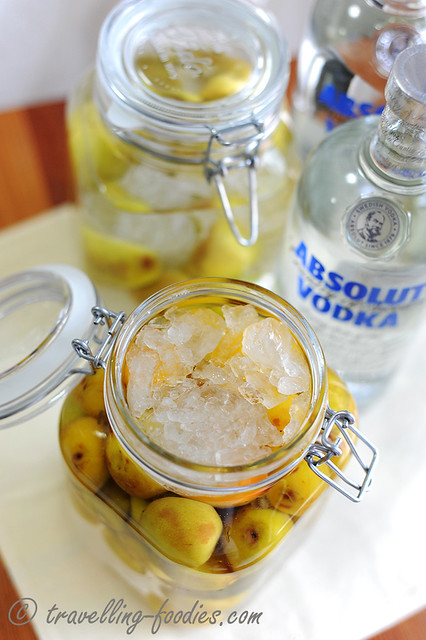 Do we need to fill the bottles all the way to the brim? Frankly, no… there should be some space above it all to create some allowance for the bottles to be swirled to homogenise the ingredients. 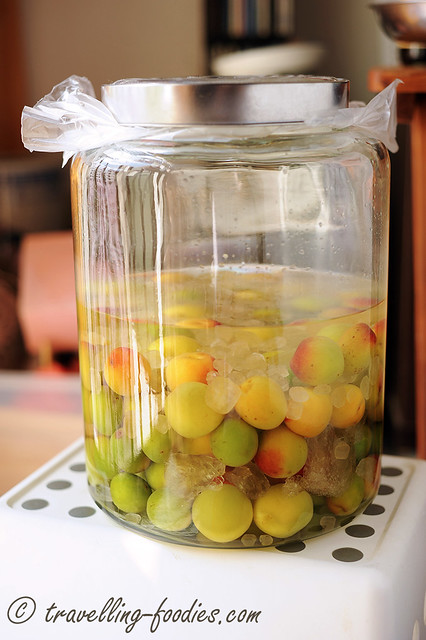 And finally maturation… after all the work is done, the bottles need to be kept in a dark and hopefully cool place for a minimum of 6 months for the flavours from the plums to be properly infuse into the liquor. I would suggest one to soak the plums for a minimum of one year in fact, the longer the better. I have some bottles which have been around for more than 6 years now, with very controlled enjoyment over the years, either flat cold or on the rocks. Homemade umeshu goes very very well with iced soda as well for the fizz 🙂

Rinse the ripen ume and soak in clean water for 20 min.
Remove the stalk caps of each plum with a toothpick or scribe. Sort out the plums and discard any plums which are very bruised.
Dry the plums and place them in a very clean and sterilised glass bottle. Sterilisation can be done by swirling a small quantity of hard liquor to coat the inner walls of the glass container. Discard the swirling alcohol after that.
Place the ume plums at the bottom of the glass jar. Place rock sugar over the plums. Carefully pour the shochu or hard liquor over the rock sugar until the liquid level is at leas an inch above the rock sugar. Cover tightly and keep in a cool and dark place.
Swirl the bottle contents every week to mix everything well. Keep for at least 6 months, preferably up to a year before consumption.

This entry was posted on June 20, 2017 by Alan (travellingfoodies). It was filed under Food, Simple Eats .