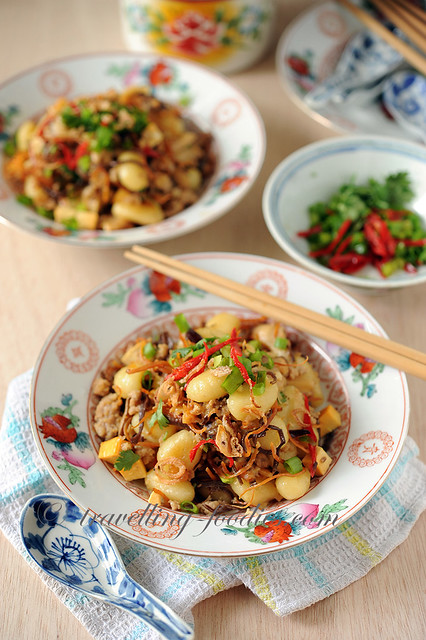 I love suan pan zi 算盘子, a 客家 Hakka speciality which is enjoyed in many parts of the larger Chinese diaspora where the khek community resides. Often doubt as “Chinese gnocchi”, suan pan zi are fashioned out of taro while the Italian counterpart from potatoes. The similarities in their making are uncanny which leaves one to wonder if the myth of Marco Polo the famed Venetian traveller to the Far East bringing the art of Chinese noodle making back to Italy giving rise to modern day pasta, extends to suan pan zi evolving into gnocchi as well. I am no food historian so whether there are any possible links that may exist between the two, we may never know. But what I do know is, I can bring these two seemingly similar yet otherwise diverse dishes together again to reprise the “Chinese Gnocchi” or as I like to think as, the “Italian Suan Pan Zi“… 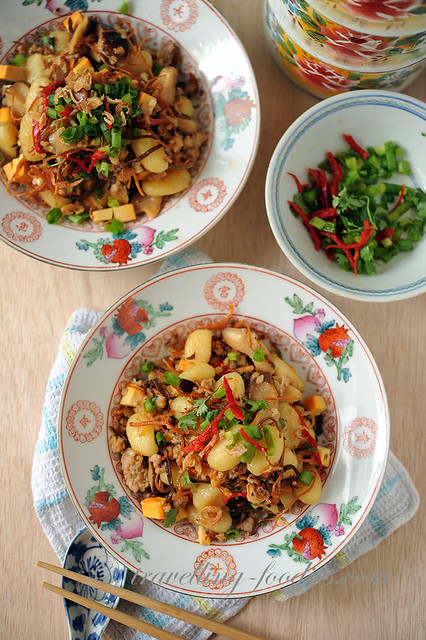 Hakka Abacus Seeds is a signature dish of the Hakka community, a must-eat dish on the dining table during festive celebrations and gatherings, especially Chinese New Year, as the plenitude of ingredients used symbolise abundance in blessings and overflowing wealth. The taro discs are shaped to look like abacus seeds, a “Chinese calculator” as some would say, to mean lots of money for one to count in the coming year. Now gnocchi don’t look like abacus seeds per se but they do look like coneshells which were commonly used as currency in primitive days so that means lots of money too! 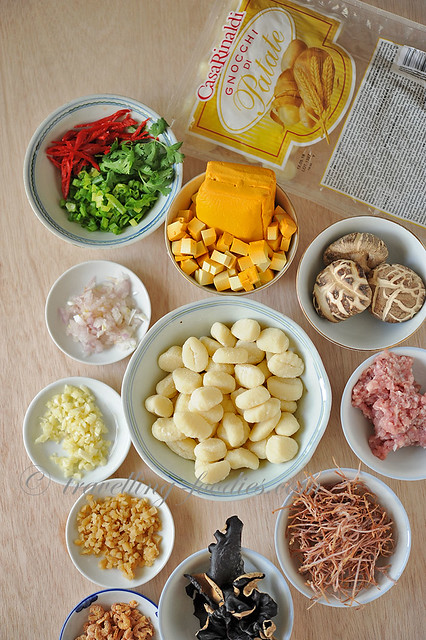 The ingredient list for Hakka abacus seeds is rather versatile, and can range from a simple few, just enough for the dish to appeal as a snack to a rather long and elaborate one, close to a dozen different condiments and elements that make it a rather satiating meal on its own. 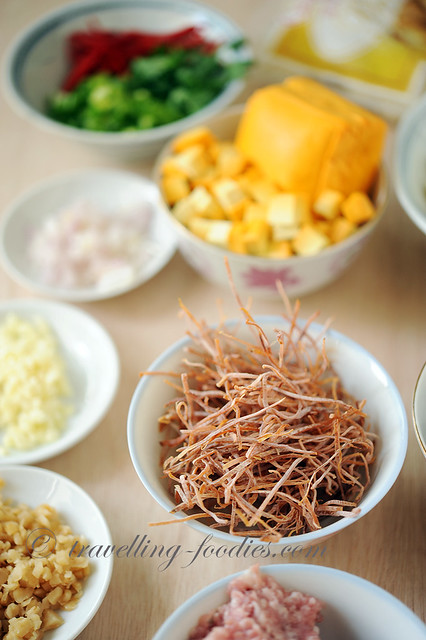 For me, a good rendition of Hakka abacus seeds must include a few staple ingredients like black fungus and Chinese mushrooms, as well as shredded dried cuttlefish and dried shrimp. The first two to symbolic of the blessings from the mountains while the latter two represent the riches from the rivers and sea. Apart from these, there is minced pork belly with a good fat ratio and salted radish aka chye poh. Compared to classical Cantonese dishes for the new year which traditionally call for 海味四大天王, the ingredients in Hakka abacus seeds seems impoverish but if one understands the frugal lifestyles the Hakka community led in the past, it is not difficult to understand why.

One theory behind the origins of the Hakka people described them as primarily nomadic people who fled their homes in the north due to war and strife before landing in Guangdong and Fujian provinces of southeastern China. By the time they reached these areas, much of the coastal flatlands were already been occupied by the Cantonese, Teochews and Hokkiens. So the Hakkas didn’t have much of a choice, but to settle in the unoccupied mountainous regions with more treacherous terrain or lesser desirable places away from the sea. They remained nomadic for a long time, in fear that instability would force them to be on the road again, and it is their impermanence in any particular location which gives rise, albeit euphemistically to the name of this community during their beginnings, 客家人 the kheks or Hakkas that make them “guests” of any place they go. For a long time, their lives remained simple and frugal, leading primarily agricultural lifestyles and this is much reflected in Hakka cuisine which are largely simply fare using ingredients which can neither be described as elaborated or lavish, to whip up a range of delectable dishes, one of which is their signature suan pan zi. 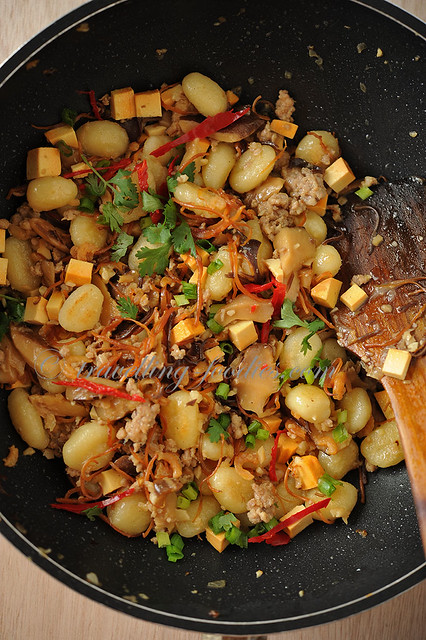 Instead of making the dish from scratch, i.e. to peel, steam, mix and mould the taro discs and fashion them into to look like abacus seeds, I’d a “cheat start” and used Casa Rinaldi’s Gnocchi di Palate which took literally just seconds to cook as the potatoes inside each of these coneshell nuggets are essentially parboiled already. It is available at NTUC Finest for those of you who are interested to try. The dish is really straightforward to prepare, and one could be really flexible with the choice of ingredients used. 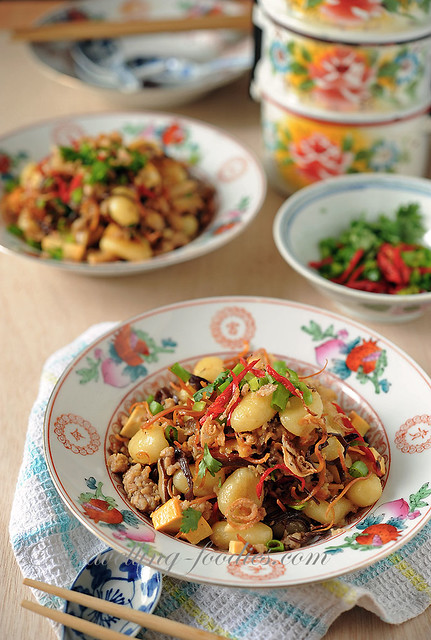 Method
In a large pot, add water and bring to a boil.
Add gnocchi and cook until they just began to float. Sieve into bowl and set aside.
In a wok, add cooking oil and pan fry the parboiled gnocchi until they turn slightly crisp and lightly brown
Push the gnocchi to one side of the wok, add minced pork and saute to render some fat
Add shallots, garlic, chopped chye poh dried shrimp and dried cuttlefish strips individually in this order and saute until aromatic.
Add sliced chinese mushrooms, black fungus and taukwa and mix all the ingredients including the panfried gnocchi well.
Season with fish sauce, oyster sauce and ground pepper.
If the mixture seems a bit dry, add 1-2 tbsp of the soaking liquids from the mushrooms and/or dried shrimp and cuttlefish strips. But do not add too much as the final dish should not appear too wet or soupy.
Stirfry until fragrant and all the ingredients are cooked.
Plate up, garnish with chopped spring onion, sliced red chilies and fried shallots.
Enjoy while it is hot! 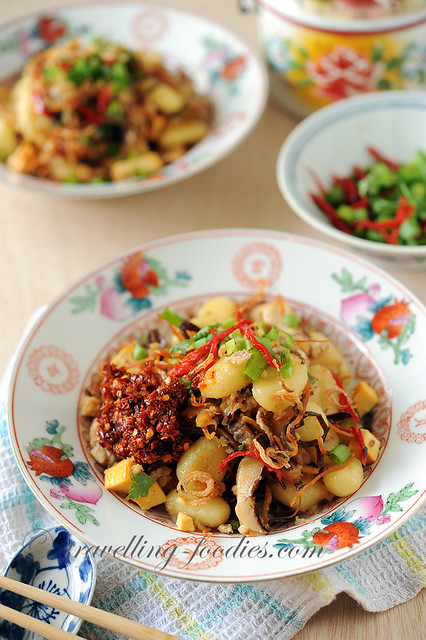 This entry was posted on September 14, 2017 by Alan (travellingfoodies). It was filed under Food, Simple Eats and was tagged with abacus seeds, asian cooking, asian cuisine, chinese cooking, hakka, suan pan zi.