On the Trail of the Phoenix – Laok Bunga Durian 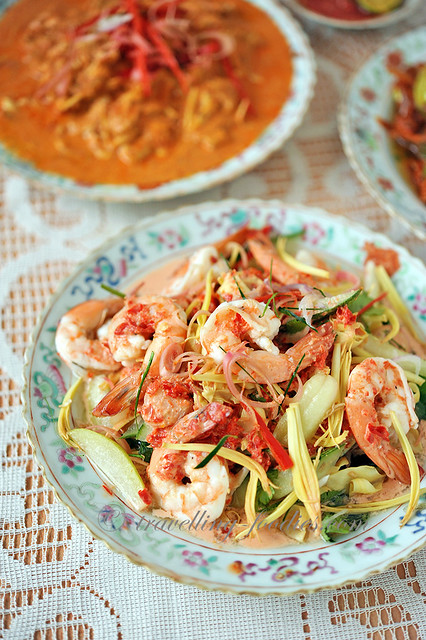 I’d not updated the “On the Trail of the Phoenix” series on this blog for quite some time now so perhaps it is a timely reminder. I was really fortunate and beyond happy to receive a big bag of durian blossoms from a friend’s tree. Truly a blessing of the season as it only occurs for a really short period of time each year between the flowers blooming to those which would fall if they were not pollinated by bats and bees. With these blossoms, I’d whipped up two traditional dishes to enjoy them as quickly as possible, the truly Peranakan way… 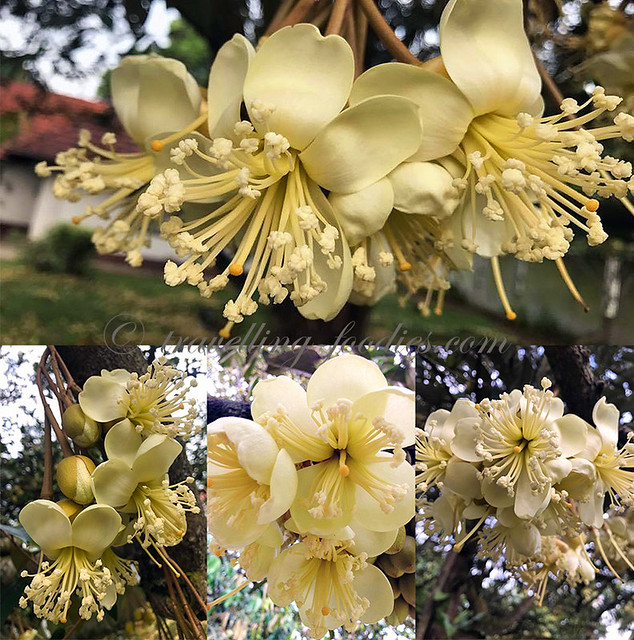 Durian is a tropical fruit which is endemic to our region and much-loved by many, judging from the countless cultivars that had developed and with  their popularity escalating and heightening over the years. But few know that the blossoms can also be eaten fresh. Inflorescence of the durian tree occurs months ahead of the typical durian season and the pollinated blooms would then continue their “life cycle” and develop into fruit which can be enjoyed as they fall upon ripening. The flowers which were not pollinated however, would quickly fall from the branch, which can be “harvested” and made into an assortment of salads, i.e. ulam, kerabu or mixed with sambals for a special treat. They can also be used in “masak lemak” dishes, either as the main ingredient on their own, i.e. Bunga Durian Masak Lemak or thrown in alongside an array of other vegetables to be cooked into “Sayor Lodeh”. 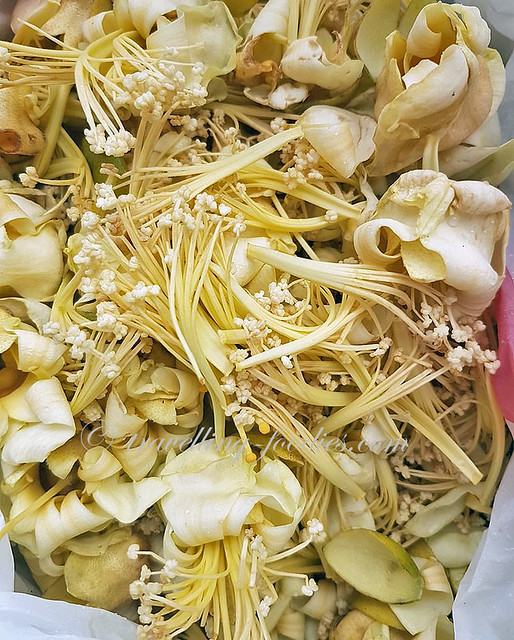 Quite a number of my friends were curious when I posted this photo on Facebook of the stash of durian blossoms I’d just received 2 days back to how they actually smell like. Do they smell the fruit itself? Well some flowers do share the same aroma as the fruits, like ume plums but not in the case of durian fortunately or unfortunately. The durian flowers actually exude a subtle floral bouquet of aromas which reminded me incidentally of freshly extracted sugar cane juice! 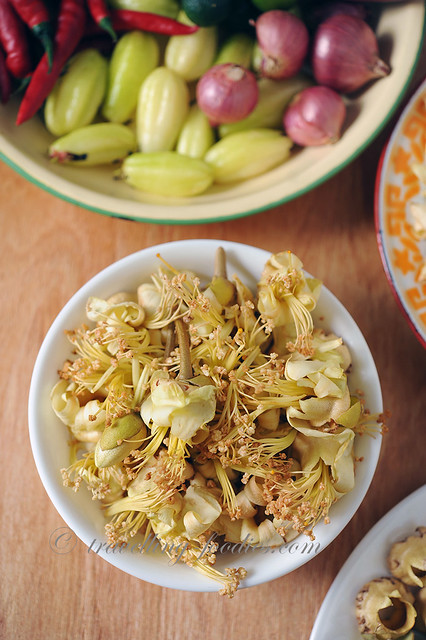 Not the entire durian blossom can be used for cooking. In fact, only the filamentous stalks of the stamen and the petals are used. The rest of the flower, i.e. the receptacle, the sepal and the pistil which bears the female part of the flower from the stigma down to the ovule are all too hard and fibrous to be properly enjoyed and thus discarded. 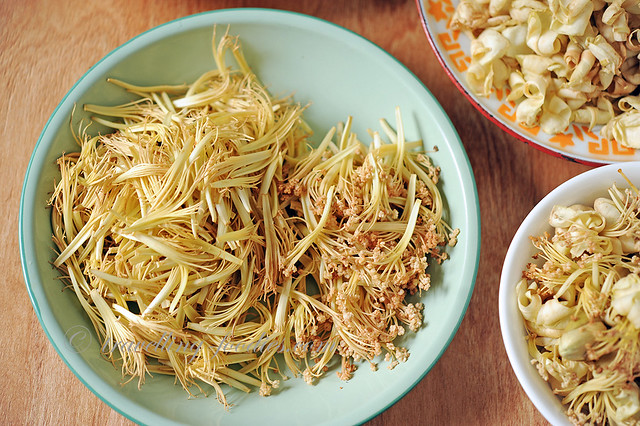 The photo above shows the stamens, i.e. male parts of the flower. The knobbly ends which bear the erupted pollen sacs bursting to unleash the pollen grains within must be removed prior to rinsing, leaving behind only the filaments which can be used for cooking. Contact with water either during rinsing or cooking would trigger the secretion of a sticky and gooey sap likening that of cutting okra but in much more copious amounts which would invariably affect the textures of the dishes and thus must be avoided at all costs. 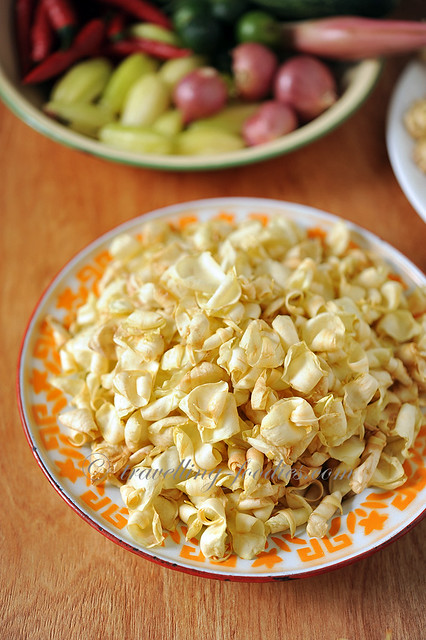 Apart from the filaments, the other edible parts of the flower are the petals. Those on fresh flowers would be firm and perky while upon losing turgor pressure from transpiration, the petals would begin to curl backwards to touch the receptacle. They would also begin to deteriorate and brown so it is paramount to process and use the fresh flowers as quickly as possible.

The portions of durian blossoms gifted to me is sufficient to make 3 dishes, of which I’d prepared Sambal Bunga Durian and Bunga Durian Masak Lemak. I froze the last portion as recommended by Sylvia to whip up another dish at a later date. 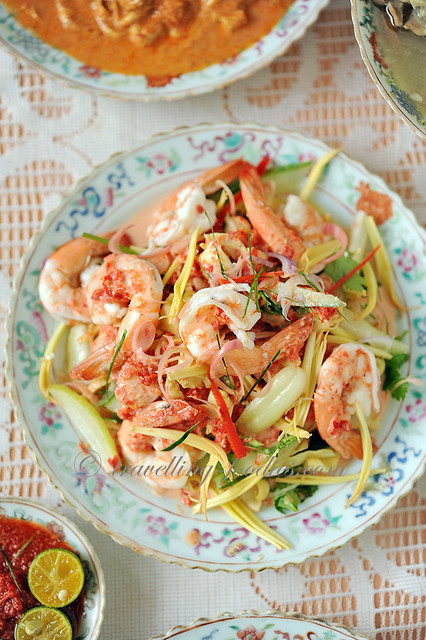 Sambal Bunga Durian is a recipe which I’d fashioned after my recipe for Sambal Jantong Pisang, an idea that struck me upon realising the similarities in textures between the filamentous stalks of the durian blossoms and the hidden banana inflorescence within the enclosed bud which bear resemblance to the human heart, as appropriately described in its Malay name, i.e. jantong pisang. The ingredients are quite easy to gather, as I already have fresh kaffir lime leaves along my corridor garden and access to some pokok belimbing near my house which fruit furiously all year round. All I had to do was to go to the local market to get some fresh produce which I do not grown on my own, i.e. a cucumber and a stalk of bunga kantan and some fresh prawns to complete the dish which would be dressed with a sauce made with coconut cream and freshly pounded sambal belacan with homemade belacan by a friend’s mum in Melaka and my own homegrown red chilies. 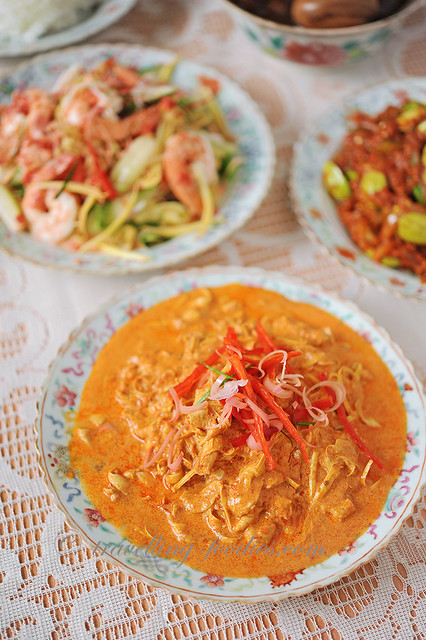 Bunga Durian Masak Lemak is yet another easy dish which I’d cooked in the style of Kangkong Masak Lemak, replacing the water convolvulus with fresh durian blossoms and omitting the sweet potatoes and prawns. Since I already have a batch of rempah made last week, it is just a matter of taking out a portion of the frozen rempah and cook with fresh coconut milk. The processed durian flowers were added at the very end just before turning off the flame to make sure that they retain their crunch. 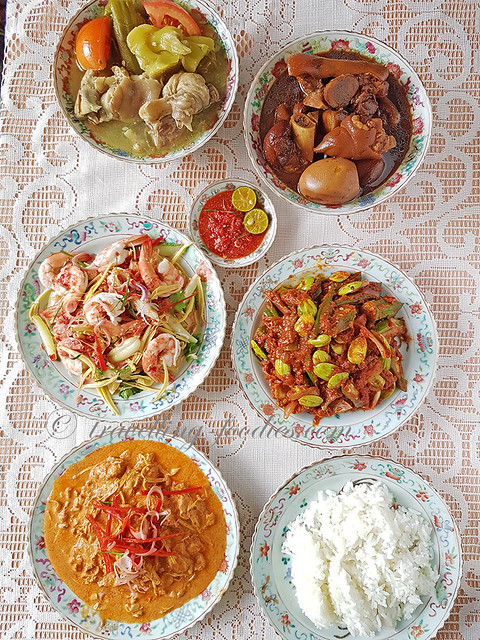 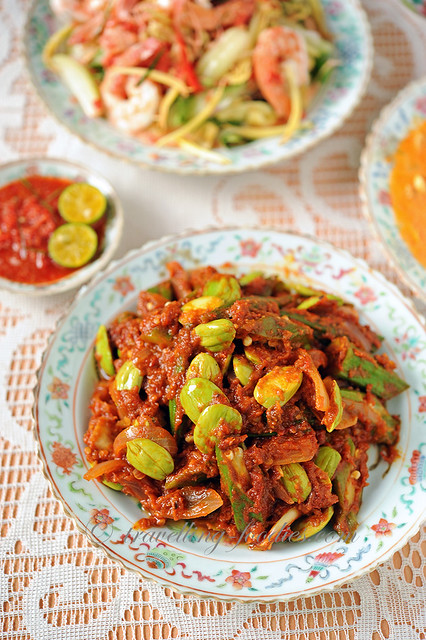 Sambal Bendeh Petai is essentially okra and stinky beans cooked in a sambal sauce with a complex flavour profile, being slightly sweet, spicy, savory and sour all at once. The sambal base contains dried chilies, onions and dried shrimp blended and fried into a paste which is then added with asam water and sugar to balance the flavours before tossing in halved petai and sliced lady’s fingers at the very end and cooked briefly before everything is plated. 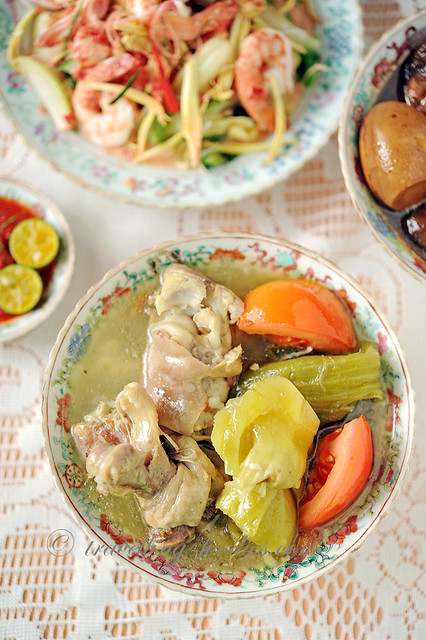 Itek Tim is the Peranakan version of the Hokkien-Teochew Kiam Chye Ark, a rich broth cooked with duck and pig trotters alongside salted mustard greens. We add some spices like peppercorn, star anise, nutmeg and cloves to enhance the flavour and aroma profile of the dish, as well as sliced lengkwas (galangal), asam boey (brined plums), asam gelugor (dried slices of asam fruit) to intensify the full spectrum of tangy hues and old garlic for their natural sweetness. Quartered fresh tomatoes are added at the very end and a splosh of brandy just before serving for extra oomph. 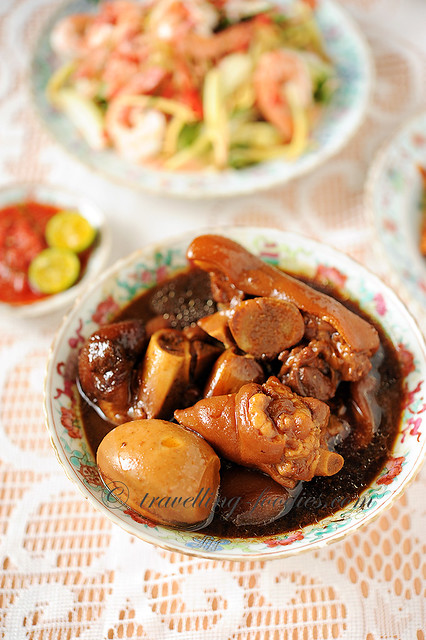 Lor Tee Kah is a another Chinese dish with Teochew-Hokkien origins which is often paired with Itek Tim on our dining table at home as they share some common ingredients, most noticeably pig trotters. The more bony portions are used in the latter while the meaty parts are reserved to cook the former, alongside lengkwas, old garlic and a bouquet of spices which are also used in Itek Tim. Premium dark soya sauce is used and rock sugar added to balance the sweetness of the dish. I only added hardboiled eggs this time round although we usually add taukwa (firm beancurd), taupok (beancurd puffs) and sometimes taukee (fried beancurd sticks) to be braised together as well. 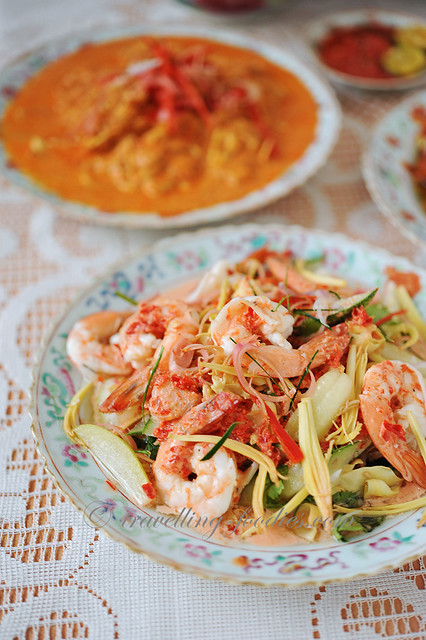 Method
Process the fresh durian blossoms as described in the writeup above
Bring a pot of water to boil and lower the flame to a gentle simmer and add a pinch of salt. Lower the banana blossoms into the water and blanch briefly for about 10-20 seconds until slightly soften. Drain and set aside.
Place blanched durian flowers, and all the sliced ingredients i.e. cucumber, torch ginger bud, belimbing, kaffir lime leaves and shallots, chopped coriander and mint leaves in a clean mixing bowl. Cover and chill in the fridge.
Heat the coconut milk in a small pot with salt until small bubbles begin to form around the perimeter and the coconut milk thickens. Do not allow it to come to a boil. Set aside to cool down slightly.
Pound or blend all the chilies into a coarse paste. Add toasted belacan powder and continue to pound/blend until it becomes a fine paste. Add calamansi juice and adjust with salt and sugar to taste. Add coconut milk and stir thoroughly. Adjust taste with more salt or lime juice if necessary.
Add poached prawns and drizzle dressing over the ingredients and toss to mix uniformly.
Plate up and serve, with more sambal belacan at the side.

Method
Process the fresh durian blossoms as described in the writeup above.
Bring a pot of water to boil and lower the flame to a gentle simmer and add a pinch of salt. Lower the banana blossoms into the water and blanch briefly for about 10-20 seconds until slightly soften. Drain and set aside.
Pound or blend 1/2 the amount of dried shrimp to form a coarse floss. Keep the other half intact for more textural contrast.
To a heated wok, add cooking oil and saute the generic rempah and toasted belacan powder until fragrant.
Add all the dried shrimp (flossed and intact whole) into the rempah and continue to saute until aromatic.
Add water and coconut milk to the rempah and bring everything to a boil before lowering flame to let everything simmer for 10 min.
Taste and season with sugar and salt.
Top up with more water or coconut milk if necessary.
Add processed filament and petals from durian blossoms mix well before turning off the flame.
Dish up, garnish with sliced red chilies, torch ginger bud and serve immediately with other dishes.

Special thanks to my friends Sylvia for the blessing of fresh durian blossoms from her tree and Richard for collecting them for me.