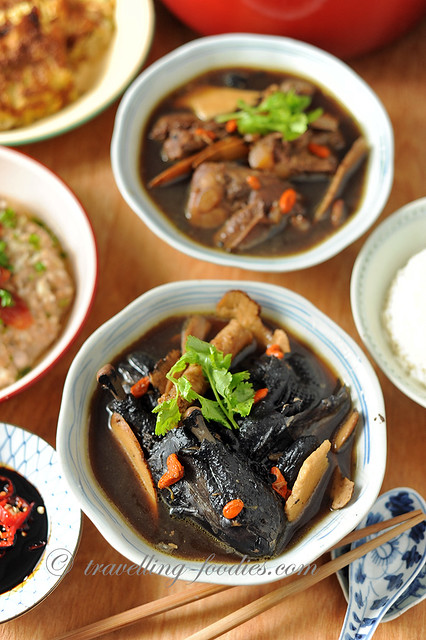 The whole week has been rather chilly in tropical Singapore with temperatures dipping to a low of 21-22°C a couple of days back. A rare sight to see everyone going around in jumpers and light jackets. It is the perfect time for herbal tonic soups as well. In the past, my mum used to stock quite a bit of dried Chinese herbs at home for soup making but nowadays, they are easily available in prepacked “concoction packets” where one just needs to buy one which is suitable for one’s needs and constitution to brew. And that was exactly what I did. 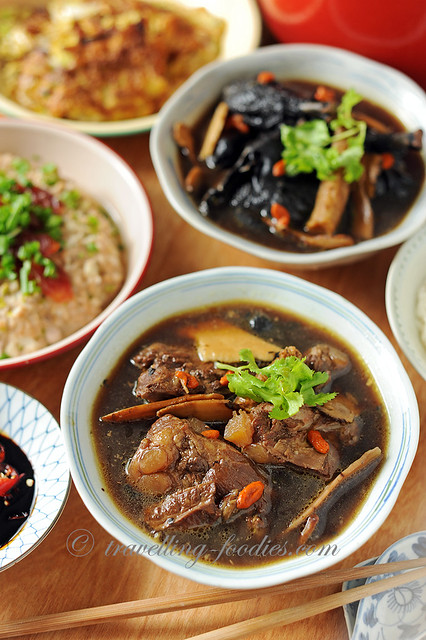 八珍杜仲滋阴乌骨鸡汤 includes the following Chinese herbs 当归、熟地、党参、枸杞、茯苓、白芍、白术、川芎 and 炙甘草 which collectively aim at nourishing the body, boosting one’s “qi” and promoting blood circulation. It is especially good for folks who feel cold, particularly the palms and soles of feet, i.e. 手脚冰冷 easily. I’d bought the packet which contains 杜仲 as well to aid in 强腰补肾. If one feels necessary, one can also add red dates or black dates to 活血 boost the blood circulation effect further or add more 茯苓 and/or 淮山 to help 祛湿 dispel excess moisture in our bodies. One can use regular hens for this soup but I used 2 乌骨鸡 silkie chickens aka black chickens for that day’s soup as this is our practice at home for making herbal soups. Unlike my parents who used slow cookers and double boilers in the past, I’d used my Le Creuset cast iron French casserole for the brewing process. One simply needs to bring the soup and ingredients to a boil for 15 minutes before lowering to a bare simmer for the rest of the slow cooking process until the meat is thoroughly tenderised.

I also added some pork ribs with soft bones called 西施骨 into the soup for a round of 药炖排骨. Traditionally, 药炖排骨 is made with 十全大补 herbal ingredients but I reckon the 八珍 concoction I bought is good enough as the two concoctions have reasonably amount of overlaps in the ingredients used.

To make the herbal chicken soup with pork ribs, simply bring a pot of water to a boil before adding the soft bones to cook for around 3-5 minutes. The pork ribs are then drained and briefly rinsed while the water with scum is discarded. A fresh pot of water is then brought to a boil before returning the pork ribs into it together with the rinsed herbal ingredients and boiled for 1 hour before adding the silkie chickens for another 1 to 1.5 hours of brewing. or until the meat is beautifully tender, just before coming off the bone. At home, we do not add salt or any seasoning into the soup itself but enjoy the meat by dabbing briefly in a mixture of light and dark soy sauce with some chopped red chilies, not unlike how one enjoys bak kut teh. 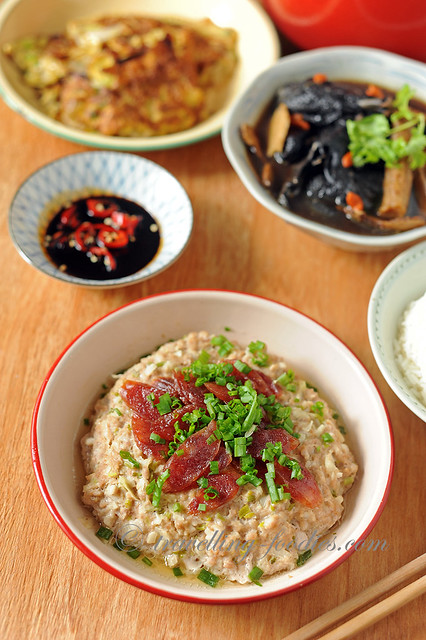 For the homecooked lunch, I also bought some minced pork to prepare a simple 马蹄腊肠蒸肉饼 Steamed Minced Pork Patty. Very light yet very flavourful at the same time.

Method
Add all the ingredients except lup cheong slices, into a mixture bowl and mix thoroughly until the concoction 起胶，i.e develops a somewhat sticky and gluey consistency.
Transfer the mixture to a steaming plate. Flatten slightly and use a chopstick to poke some holes into the patty, especially in the middle.
Lay the sliced lup cheong over the meat patty.
Steam at high heat for 10-12 minutes or until the patty is thoroughly cooked.
Remove from steamer and sprinkle with more chopped spring onions on the surface before serving. 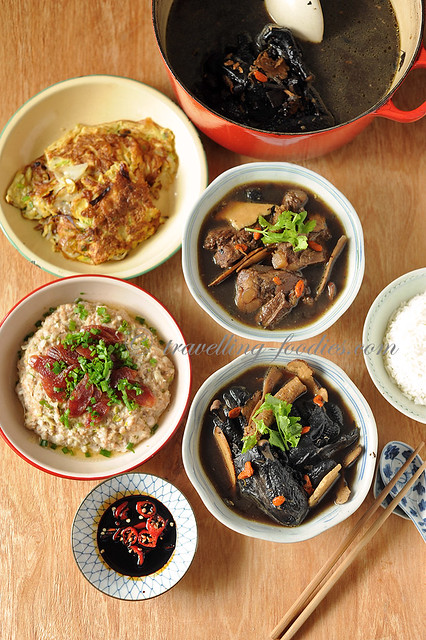 This entry was posted on January 17, 2018 by Alan (travellingfoodies). It was filed under Food, Simple Eats and was tagged with black chicken, chinese cuisine, herbal chicken, herbal soup, silkie chicken.