A good friend recently gave birth so when some friends and I visited her last week in the hospital, I thought of cooking her something which is simple yet nourishing at the same time. Remembered I still have some bottles of essence of chicken at home so a quick trip to the market in the morning to get some fresh chicken thighs to go along with some chinese herbs and dry ingredients I already have at home for a fix of 鸡精蒸滑鸡腿 Steamed Chicken Thighs with Essence of Chicken. 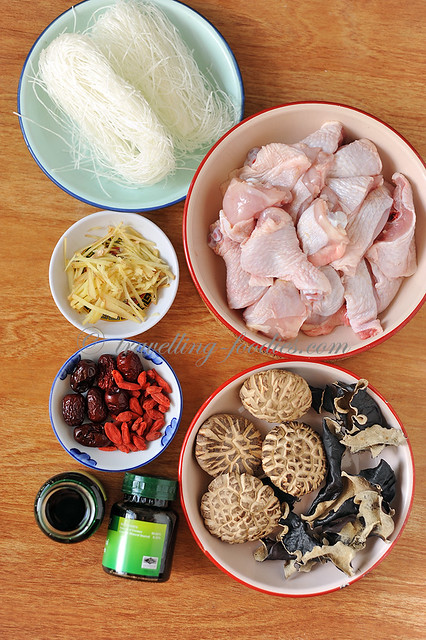 The list are incredibly simple using just a handful of ingredients. Chicken Thighs are a must of course but if the new mother had delivered by Caesarean section, she should abstain from consuming chicken for the first 2-3 weeks of her confinement period. Naturally essence of chicken would be a no no as well. 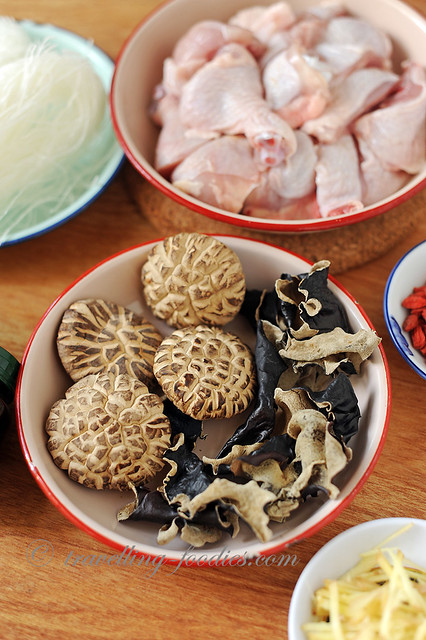 Apart from Chinese mushrooms which impart a lovely bouquet of aromas unto the dish, I’d also added black fungus. There are two types of black fungus commonly available from supermarkets. The type to use are the bigger and harder ones with a beige velvety back which lends its Chinese name 白背木耳 aka bok jee. Black fungus is supposedly rich in iron which helps in the rejuvenation of red blood cells to replenish blood loss during delivery. Its very fibrous and hence help to prevent constipation as well, a common problem among women and not only pregnant mothers-to-be or new mothers like my friend. Chinese TCM also believes that black fungus has medicinal properties to promote blood circulation, dispel blood clots and lowering blood cholesterol levels. That said, there is also a school of thought which believes that black fungus has blood thinning properties that may impede the clotting of blood thus affecting the healing of wounds. So I guess everything in moderation… 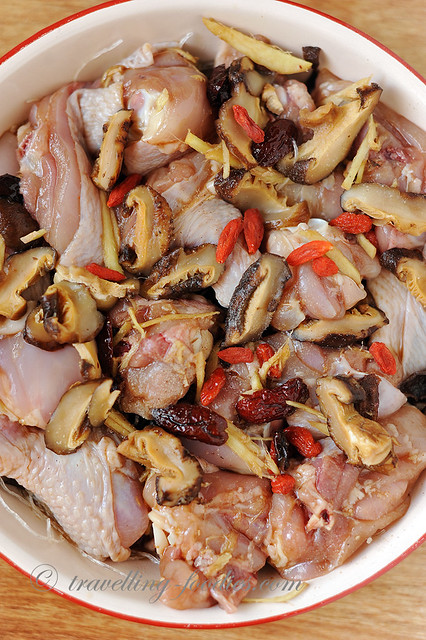 Apart from black fungus and Chinese mushrooms, the other prominent ingredient is old ginger which helps to dispel “wind” from the body, especially important after delivery which can reduce the chances of contracting rheumatism and other related ailments. It is believe that if the new mother’s confinement is done properly, her inner constitution would improve dramatically for the better. Red dates are also added, again to replenish iron and promote blood circulation. Goji berries for good eyesight. 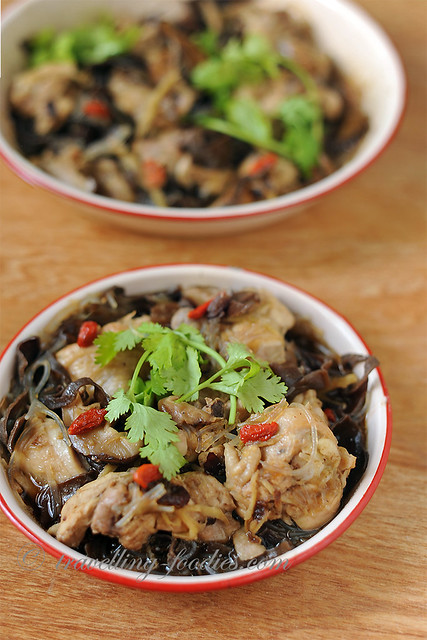 Method
In a mixing bowl, place chopped chicken thighs, Chinese mushroom strips, sesame oil, ginger, corn starch, one bottle of essence of chicken, salt and light soy sauce in it and mix well to incorporate. Set aside to marinate for at least 30 min in the fridge.
To a deep steaming dish or shallow bowl, place the tang hoon over the base, followed by black fungus strips and then contents in the earlier mixing bowl over the top.
Sprinkle with goji berries.
Steam under high heat for 15-20 min until the chicken is thoroughly cooked. One may flip the chicken pieces halfway through steaming to ensure uniform heat distribution.
When the chicken is just about to be cooked, pour the other bottle of chicken essence of the ingredients. Cover lid and continue to steam for another 5-8 min.
Serve immediately while still warm.