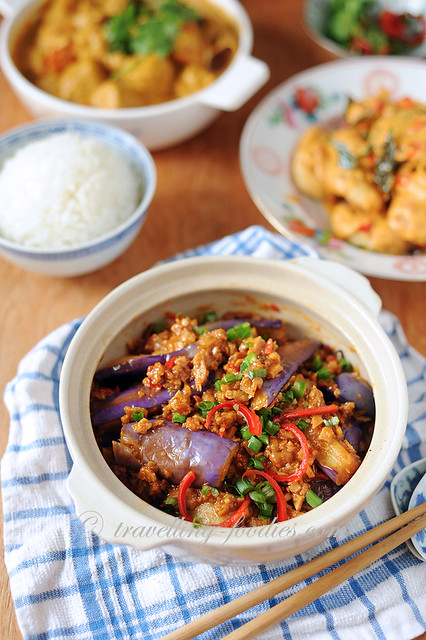 鱼香茄子 Szechuan Style Spicy Brinjal is a classic dish from one of the 8 main cooking styles representative of Szechuan cuisine, which also include 麻辣，宫保 etc. There are several sources to how the name came about. One mentions the use of a range of ingredients like spicy soya bean paste, garlic, chilies, ginger and spring onion etc to create the sauce which was used traditionally for braising fish. In those days, fish was not a common dish on the daily dining table and only available during important festive occasions when the family pay their respects to the deities or ancestors was when fish was offered and the family got to eat. For everyday meals, cheaper vegetable alternatives often grown in their own fields like brinjal wer used instead… 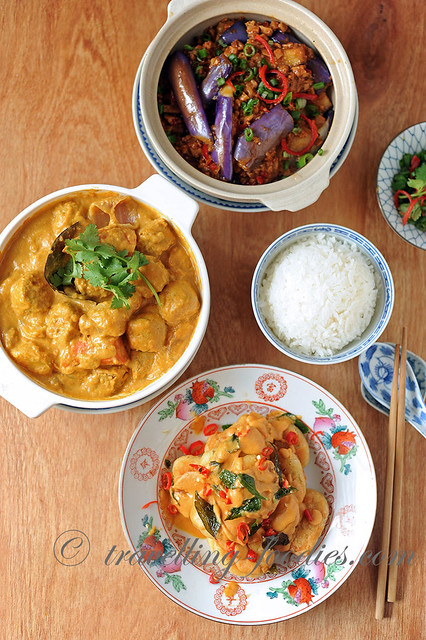 Another describes the term “鱼香” to sound like “余香” as it uses scraps of leftover ingredients from other dishes to create the sauce. Whichever the case, the dish is incredibly tasty and I remember distinctively when I first had it during my initial trips to Taiwan many years back, at those 100元热炒店，which are no different from our local tze char stalls where folks would order a few dishes like 三杯鸡, 姜丝大肠,客家小炒 and of course this dish, 鱼香茄子 to go with rice, not forgetting a bottle of cold Taiwan beer to wash it all down. It is a staple household dish in Taiwan because of the KMT troops from Sichuan, the 川军 who retreated to Taiwan during 1949 together with Chiang Kai Shek and settled in the local makeshift communities called 眷村. The famous Taiwanese beef noodles share the same origins. When I cook this dish at home, I always make a point to cook more sauce so that I can eat it plainly with just rice or noodles with a good sprinkling of chopped spring onions and Chinese coriander, much like 炸酱面. It taste even better on the next day. 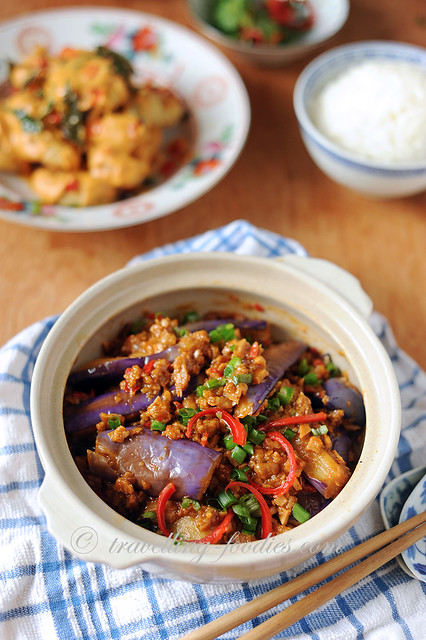 The choice of brinjal is important for this dish. We usually buy young brinjal which are smaller, thinner and less fibrous in texture. Oh yes and a little tip for cooking brinjal. I like to heat up the wok first and place the brinjal pieces into the wok immediately after cutting to prevent them from oxidising and turning brown. This saves me the trouble of traditional methods of soaking brinjal in a weak brine or even sprinkling of white glutinous rice vinegar to denature the enzymes that speeds up the browning process. More importantly, this helps to preserve the beautiful purplish hues of the brinjal which greatly improves the aesthetics of the dish. That said, do wipe dry the brinjals before cutting to avoid splashing of oil caused by the residual moisture on the surfaces.

For today’s rendition, I used Quorn’s Swedish Style Balls chopped into small bits to resemble minced meat (because I couldn’t find the minced version at my local supermarket) and I must say that it worked really well as a substitute for minced pork in the traditional dish. Otherwise, one can also replace it with regular minced pork or chicken for the more traditional take on this dish. Be foretold, it is very addictive with rice and may make you go for seconds. Don’t say I did not warn you…
鱼香茄子 Szechuan Style Spicy Brinjal

Method
To a heated wok, add sufficient oil for shallow frying the brinjal.
Shallow fry under medium heat until the white cut surfaces turn lightly golden brown.
Drain the brinjal and set aside.
Add 2 tbsp of oil back into the wok and add minced garlic and ginger. Stir fry until fragrant.
Add spicy soy bean paste, chopped red chilies, chopped Quorn Swedish Style balls and stir fry until fragrant.If minced pork or chicken is used, saute until lightly brown.
Add water or stock together with chicken powder, sugar and bring to a boil.
Reduce slightly for the sauce to thicken before returning brinjal to the wok. Stir fry to mix well.
Finally, add sesame oil, chinese cooking wine and glutinous rice vinegar before giving everything a final toss.
Dish up and garnish with chopped spring onions and more chopped red chilies. Serve immediately. 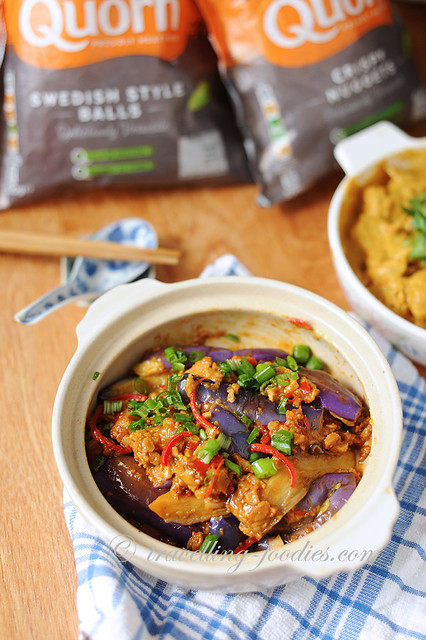 This entry was posted on March 29, 2018 by Alan (travellingfoodies). It was filed under Food, Simple Eats and was tagged with aubergine, brinjal, eggplant, sichuan cuisine, spicy brinjal, szechuan cuisine.