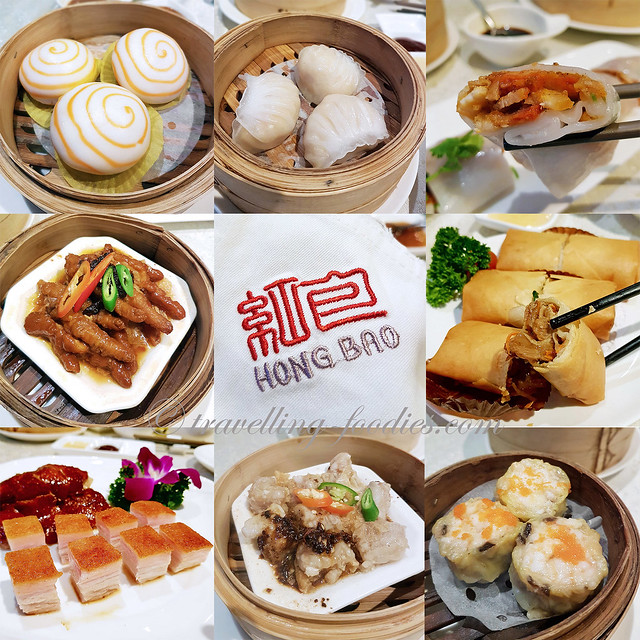 Whenever one thinks of eating in Bangkok, the widespread availability of street food options immediately comes to mind, with some local eateries or hawkers peddling from their pushcarts selling a generous assortment of yummy dishes and snacks in practically every street corner or down every sol and thanon that run alongside the busy Sukhumvit Road. Our recent trip to Bangkok however, also allowed us to sample other kinds of food that may not come to mind when one visits the Land of Smiles, and here is one of our favorites. 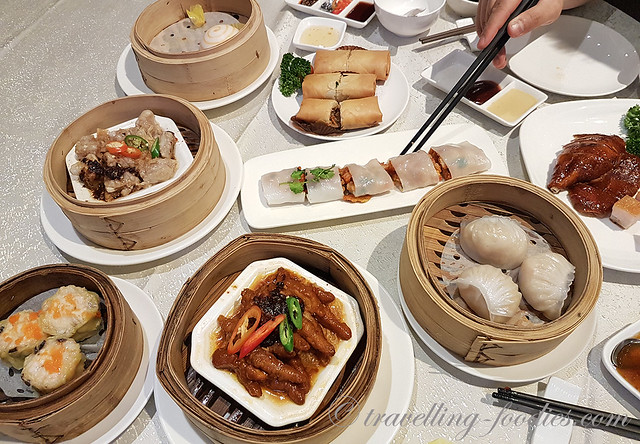 紅包 Hong Bao is a classic Chinese restaurant in Central Embassy which boast to serve really decent dim sum and traditional Cantonese dishes. The price tags on the dishes run a couple of notches higher than what one would expect of typical Thai street food of course. This mall houses several other restaurants serving haute cuisine after all, most notably Le Salon de L’Atelier de Joël Robuchon on the ground floor. But the quality of the food we were served at Hong Bao, in our humble opinion rivals that of some of the best dim sum we have had in Hong Kong, so it was in some sense, really value for money. 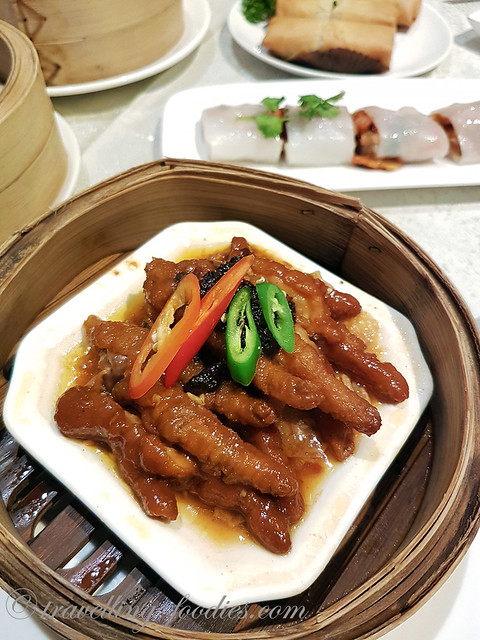 豉椒蒸凤爪 Steamed Chicken Feet with Black Bean Sauce is one of my “to-go-to” dishes whenever I am in a dimsum restaurant. The renditon at Hong Bao was really well executed on the day we visited. Wobbly soft and succulent yet not overtly mushy like some places we have tried before. The flavour profile was also to the tee, very bold yet balanced, as one can make out every component of what was intended, be it savory, sweet, umami with a hint of spiciness. I liked the fact that the dish was not too cloying and oily as well. 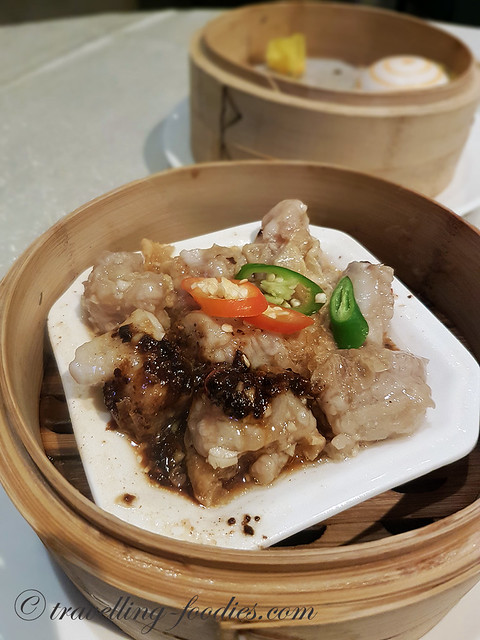 豆豉蒸排骨 Steamed Spare Ribs with Black Bean Sauce, also wonderfully done with a good ratio of meat versus the soft cartilage in the 西施排 used. Each piece had a velvety soft texture to it yet the layer of starch coating remained thin. The meat was fresh, evident from both the taste and colour. A really good rendition in our opinion. 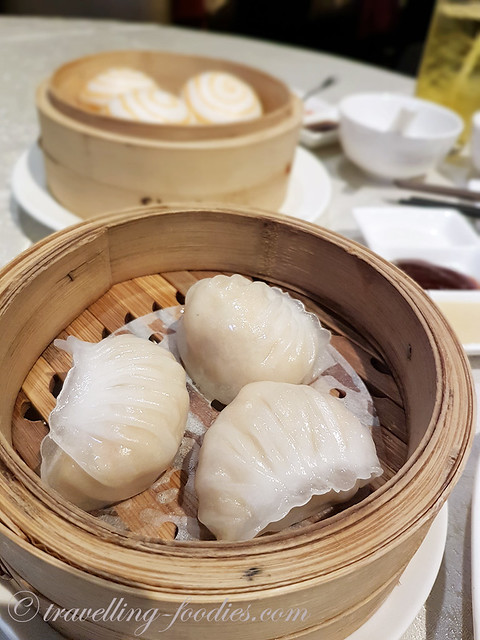 Their 虾饺 har gau Shrimp Dumplings were pretty good too though we would have liked the skin to be a tad thinner with more of the pinkish hue of the prawns within peering through. The filling was really generous, 3 crunchy shrimp packed in each delicately wrapped scallop-shaped morsel unleashing umami flavours of the sea with every bite. 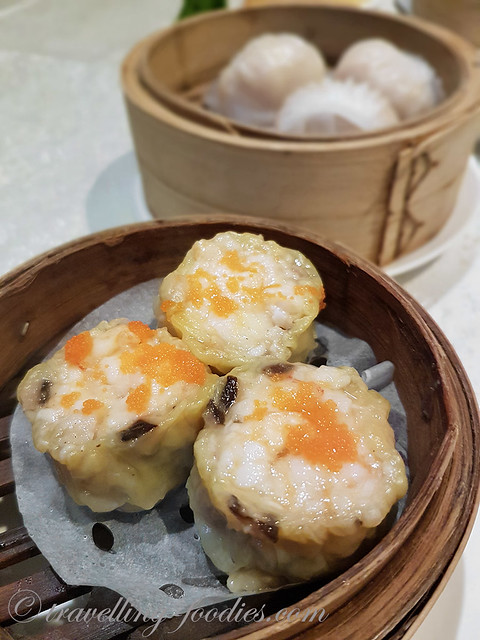 The 烧卖 Siu Mai Dumplings were also very well done, with an assertive ratio of fat in the filling which was incidentally very well textured as both the fat and pork were finely diced and not minced which provide quite a bit of bite against the crunchy textures from the shrimp. I appreciate the fact the siu mai skin used for the wrapping did not have any tartrazine or other food colouring added in it, a common curse with commercially available wanton wrappers out there. 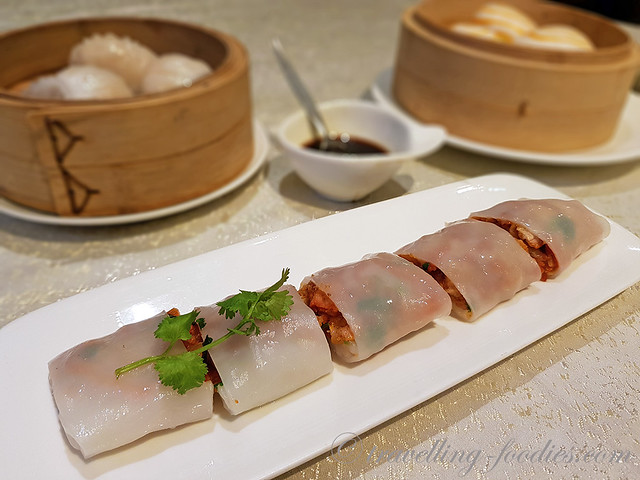 The 叉烧肠粉 Steamed Cheung Fun Rice Roll with Char Siu Filling was a slight letdown in terms of the skin texture as well. It was not as silky soft as we would have hoped for, perhaps a slight variation of flour ratio than what we are accustomed to eating in Hong Kong. It also clearly lacks the glimmering sheen of freshly steamed cheung fun. But the char siu filling was surprisingly good. 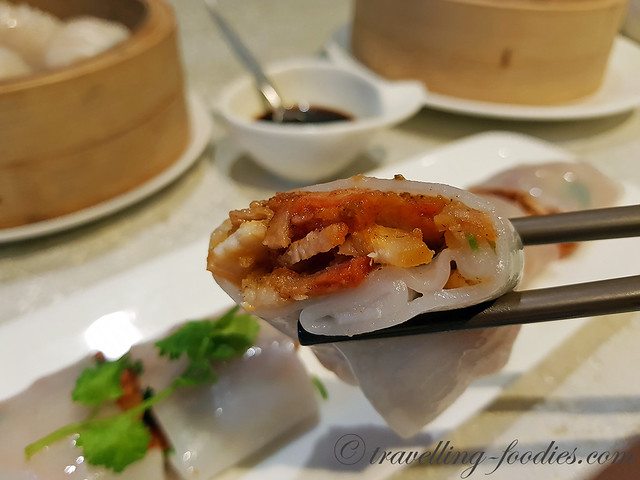 Each piece was generously packed with lots of chopped char siu which seemed to have been freshly sent from the roast pork section to the dim sum kitchen for the cheung fun to be made. Ironic it might seem I know. Kinda mixed feelings about this particular dish. The portion with just one roll chopped into 5 pieces, was also smaller than what one would find in dim sum restaurants in Hong Kong. 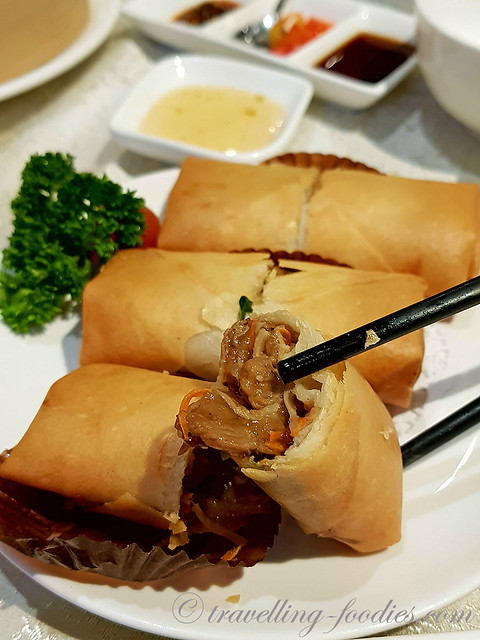 The 炸春卷 Fried Spring Rolls were absolutely delish! The skin was uber crisp yet delightfully light and most importantly not greasy at all! Clearly the chef who prepared this dish has a good grasp in oil temperature and timing control. The filling remains really moist and yummy, with a surprise element of roast duck meat being incorporated into it as well, presumably from the Peking roast duck which is also from the menu. Good balance of seasoning as well, prominent hues of five spice yet allowing the sweetness of the stewed vegetables to come through vividly as well. 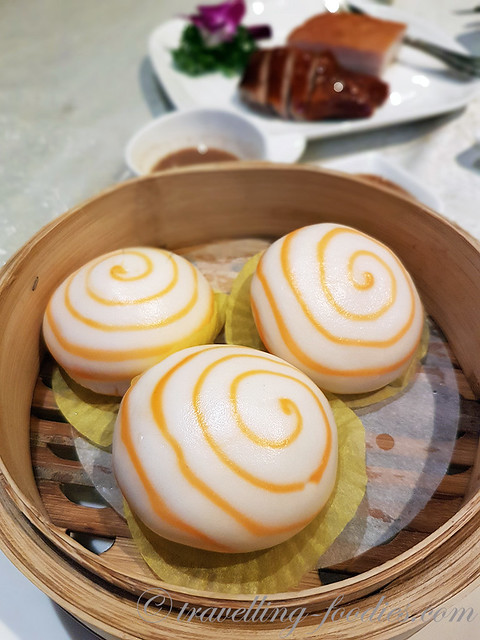 One of the signatures of the dim sum spread at Hong Bao is their 流沙包 Steamed Buns with Lava Salted Egg Yolk Filling. It is apparently a must-order for every table here to try their dim sum and it certainly did not disappoint. The custardy filling had that much coveted dramatic “oozy” effect as one attempts to pry the piping hot skin apart as you can see in the video below.

The skin was thin and pillowy just the way we like it while the salted egg yolk in the filling came across quite strongly. It was a tad on the sweet side which J enjoyed. 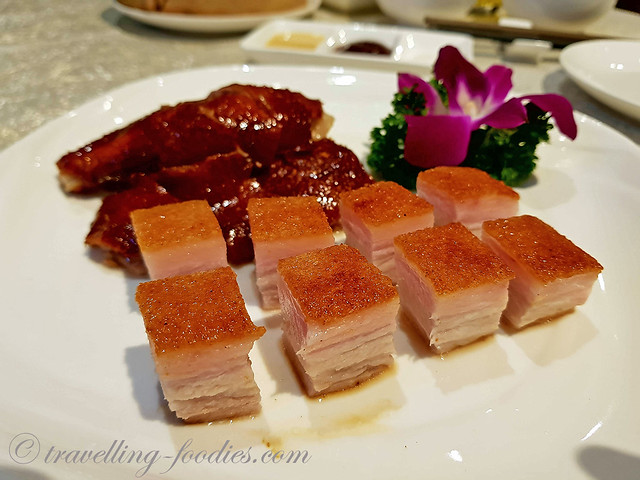 We also ordered 烧腊双拼 A Duo Platter of Roast Pork Belly and Roast Duck. The 烧腩仔 was beautifully crafted, very even coloration on the uber crisp skin without any pockmarks or uneven blistering. Each bite was bursting with meat juices and had a good ratio of meat to fat. It was just perfect. The roast duck came as one whole 烧鸭脾 whole roast duck leg (thigh and drumstick). Like the roast pork belly, the skin had a beautiful glistering tone, so so crispy while the meat was amazingly succulent. I would have thought they had replaced the roast duck with Peking duck if they had run out of the former. But we ain’t complaining of course cos it was so good… 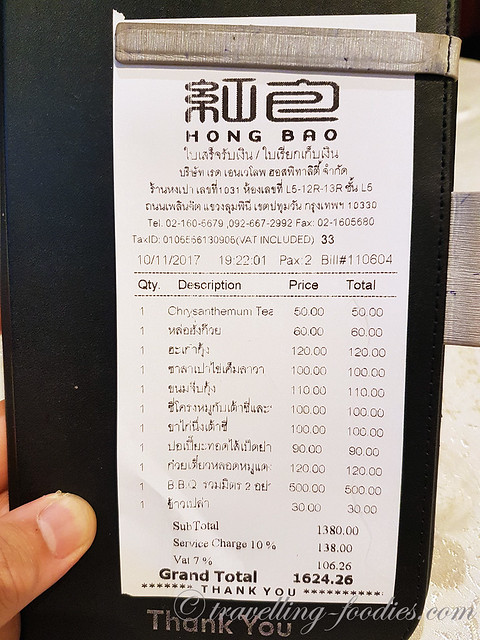 The bill came up to slightly more than 1600 THB which converts to less than 70 SGD, that includes the chrysanthemum tea we ordered as well as towel charge and taxes, slightly pricey by BKK standards as most would agree but an affordable price to pay for a really good meal. 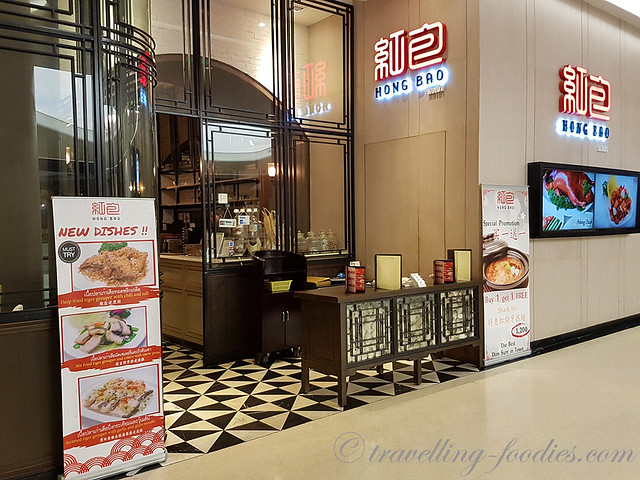 On the whole, it was a really enjoyable dinner (yes we had dim sum for dinner!) for both of us at Hong Bao Central Embassy and we would definitely be back to try their other signature dishes.