九份 Jiu Fen (or sometimes scripted as “Jiou Fen“) is a small township perched on the hilly terrains of north-eastern Taiwan. Together with 金瓜石 Jin Gua Shi, 十分 Shi Fen, 瑞芳 Rui Fang and 金山 Jin Shan, Jiu Fen was an important gold mining area more than a century ago. But as the yield decreased over time, the mining activity dwindled and eventually came to a halt. The town quieten down and became mostly forgotten for more than a decade, until 《悲情城市》, a movie set in Jiu Fen by renowned Taiwanese director 侯孝贤 Hou Hsiao-Hsien brought to it the curious crowd from Taipei and other parts of the island state. Even then, more than 20 years has since passed and even 《悲情城市》 too has become forgotten. But the movie left behind for Jiu Fen a tourism legacy. Till today, the small town is packed with local visitors and foreign tourists every weekend. Folks flock here for the fresh mountain air, the scenie view of Keelung Fishery Port and of course, a wide selection of local delights which Jiu Fen is well known for, including草仔粿 mugwort glutinous rice cakes from  阿蘭草仔粿, 鳳梨酥 pineapple cakes from 李儀餅店 and of course the infamous 九份芋圓 Jiu Fen Taro Balls.
END_OF_DOCUMENT_TOKEN_TO_BE_REPLACED

Talk about street food in Taiwan and one cannot dispense discussing “Oh-Ah Mee Sua” 蚵仔麵線 Taiwanese Oyster Mee Sua. With humble beginnings as a “poor man’s snack”, Oh Ah Mee Sua soon became an internationally renowned dish which one would flock to eat when they visit Taiwan. That is certainly the case for me. Over time, two versions evolved, one which uses fresh oysters 蚵仔, and another with braised large pig intestines 滷大腸, both equally popular with their own loyal followers. I love ’em both as they offer very different experience in flavours and textures. So if you like Oyster and Large Intestines Mee Sua like me, do give the recipe a try!

END_OF_DOCUMENT_TOKEN_TO_BE_REPLACED

Long before the designation of Taipei 台北 as the capital city of Taiwan 台湾 by the Qing court in early 18th century, the southern city of Tainan 台南 was long regarded as the centre of administration, politics, as well as financial and economic development in this island state. Tainan was established as the base of Dutch Formosa when the Dutch East Indies company came in the early 1600s and used it as a trading post, which they’d named Fort Zeelandia at Anping 安平. This earned Tainan the name “hoo siah” 府城 in the local Min dialectal tongue, a place where the local folks in southern Taiwan, especially those in the neighbouring counties like Chiayi 嘉義, Pingtung 屏東, Kaohsiung 高雄 and Nantou 南投 looked upon as a site of social and cultural flourish back in the old days. 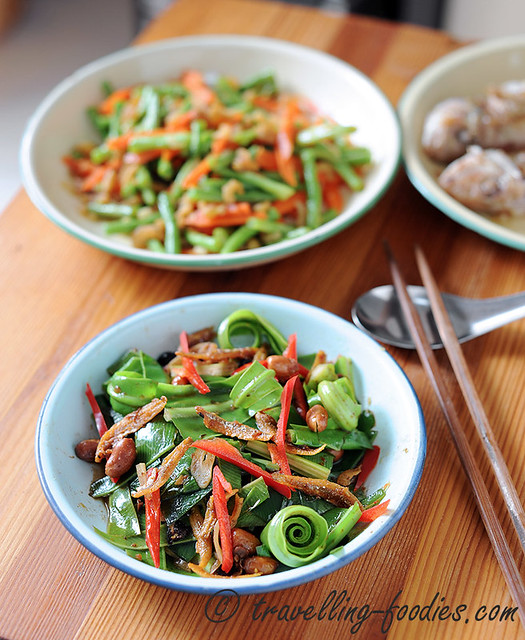 Taiwan has more than 20 distinct tribal groups, more than half of which are still awaiting to be acknowledged. Many of them have uniquely spoken languages, cultural and religious practices and of course, cuisine. But one dish which seems to perpetuate quite a number of aboriginal groups is 炒山蘇 Bird’s Nest Fern Stir Fry. I vividly remember having it for the first time around 10 years back during our initial trips to Taiwan. It was a cold evening in February. The rain most certainly didn’t help. Not a good time to visit night markets, so our Taiwanese friend drove us up to Yang Ming Shan 阳明山 in the outskirts of Taipei. We stopped by at what seemed to be  just a small and shabby-looking eatery forged out of makeshift material and planks. I could still hear the pitter-patter in my head as the raindrops fell on the galvanised zinc rooftop. We had several interesting dishes for dinner that day, what the locals would call a 野菜宴. The highlight for the day was a chicken soup cooked with various Chinese herbs, wild vegetables and of course a free-range chicken. The soup which was served in a blackened terracotta pot was still in a rolling boil, perfect for the weather. Then there was a wild boar meat stir fry with very simple ingredients. It was immensely peppery and gingery at the same time, presumably to musk any gamey flavours from the animal, which the boss-cum-chef purportedly claimed to have just been caught by a trap the night before. But what interest me the most, was in fact a dish of curled up leaves, glistening in oil and sauce against the florescent lamps. That was the first time I had bird’s nest fern stir fry. A memorable experience, a dish I would definitely order whenever it is available on the menu, and one which I am very keen to replicate at home for myself. I’m glad I did.
END_OF_DOCUMENT_TOKEN_TO_BE_REPLACED 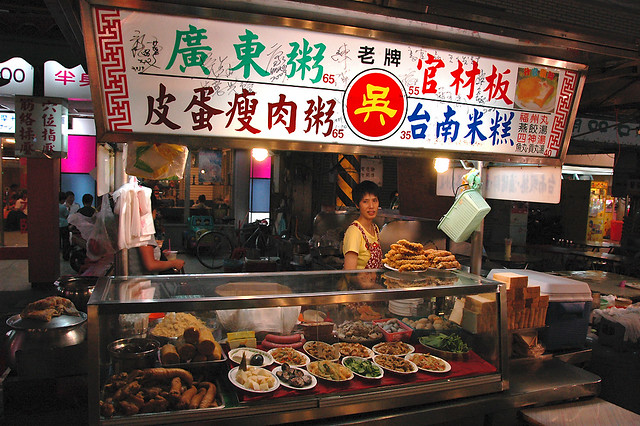 Welcome to Taiwan! Our 10th instalment of Asian Food Fest brings us to this beautiful country which was once called “Formosa” by the Portuguese, the first “foreigners” to set their eyes on it about 500 years ago to mean “Beautiful Island”, and beautiful is truly an understatement. Rarely would one would be able to find another place on Earth where one could be enjoying the warm sea breeze by the coastal regions and within less than an hour, scale altitudes of more than 2500m above sea-level to confront the majestic mountain ranges. Having the Tropic of Cancer cutting right through the island nation, one can be chewing sugarcane in Tainan or Pingtung in the morning and in less than half a day’s drive, be admiring the majestic cypress and cherry blossoms on Alishan or even playing with snow on Yushan. It is through this complex and often strategic juxtaposition of geographical factors that brings about the rich natural and social history Taiwan has, as well as its anthropology and culture. So join us in this month-long adventure to discover the interesting aspects of her food culture, the nuances which make her distinctively different from her proximal neighbours, to become what we now know as being uniquely Taiwan!

END_OF_DOCUMENT_TOKEN_TO_BE_REPLACED

Our last trip to Wulai was some years back and it was a very brief one, to admire the sakuras. Alas we were a little too late then and the season was just over. We’d spent a considerably amount of time in 雲仙樂園, a local amusement park with a gondola that leads into the mountains and didn’t get much of a chance to see much of the old and rustic side of this beautiful small town 40 minutes south of Taipei City. So here we are, back again after all these years to find out more about this quaint little place which we passed through, but never got to know…

We have our own list of “must go” places and eateries which we try to make it a point to visit whenever we are in Taipei. And Pâtisserie Sadaharu Aoki is definitely high on that list. Well, Aoki has dessert boutiques in Tokyo too but there are far too many other patisseries in this Asian Capital of French pastry making as well which we have been want to visit (yes, yet another very long list!), to a point of being literally spoilt for choices. So we were “forced” to limit ourselves to Aoki san’s joints largely in Taipei and keep the visits to his Tokyo outlets down to once or twice (such a shame I know!), until the Japanese list of patisseries has been properly exhausted. But I doubt we’ll see that happening any time soon!
END_OF_DOCUMENT_TOKEN_TO_BE_REPLACED

The Taiwanese know their Japanese food really well. Yes you heard me right. Apart from Tokyo or Osaka, most if not all of my best Japanese meals were in Taipei. The Taiwanese are such “nipponophiles” (if there is ever such a word) that they have achieved a certain of specialisation, be it the traditional art of mochi, sushi or oden making, to replicating the concept of Japanese bakeries and boulangeries in their entirety.

But the Taiwanese are far from being mere copycats. The island nation being subjected to Japanese colonial rule for the longest time outside Japan itself, allowed an almost complete inheritance of not merely the superficial but in-depth transposition of cultural practices. Needless to say, this bore an ingrained effect on their culinary and dietary profile as well. During our last trip to Taipei, we’d visited 肥前屋 Unadon Speciality Shop. It is a small restaurant, complete with wooden sliding doors for that authentic rustic feel, most known for their unadon, also known as unagi don, which is short for “unagi kabayaki donburi”. The best unadons we’d seen were probably in Kyoto. But the rendition served up in this little deli in the heart of Taipei is pretty wicked as well, but only for a fraction of the price.
END_OF_DOCUMENT_TOKEN_TO_BE_REPLACED

Last day in Taiwan, day to do some last minute shopping, especially for foodie goodies…

Beginning of Day 6, our last day in Taipei. We checked out of the hotel and walked to a shop in between the hotel and Ximending for some 伴手礼 aka 手信. bought 世运凤梨酥 which is award winning. On the way from the shop to ximending, we came across 北门, located at the junction of 台北车站 and 西门町.

END_OF_DOCUMENT_TOKEN_TO_BE_REPLACED

It was another grey and rainy day in Taipei. Visiting 龍山寺 seems to have become a ritual whenever we are in Taipei. Not so much as to pray, but more to take in the atmosphere. The afternoon itinerary is for Danshui but poor weather seems to forebode futileness. So a change of plans to go to the Jade and Flower Weekend Markets located under the flyover of JianGuo and Ren’ai Roads. Evening is another gastronomic experience at Gyukaku.

Going 龍山寺has almost become ritualistic for our trips to Taipei, and stopping by 小南鄭記 for some Tainan delights, 碗粿 and 虱目鱼焿 has also become much of a routine.

END_OF_DOCUMENT_TOKEN_TO_BE_REPLACED

After breakfast at the hotel cafe, we took the HSR from Kaohsiung back to Taipei. Choosing the appropriate timing is very important as certain trains make very few stops along the way from Kaohsiung back to Taipei, namely at Taichung and Banchiao. This shortens the travelling time considerably. Also, since the train does not call upon every stop, there are few passengers boarding and alighting making the journey less disruptive!

Breakfast at kindness hotel in kaohsiung before checking out. The menu is roughly the same for both days but still, the spread is quite decent given the price we paid!

END_OF_DOCUMENT_TOKEN_TO_BE_REPLACED

After breakfast at the hotel cafe, we set off to 莲池潭 Lian Chi Tan， a scenic lake dotted with pagodas, shrines and temples located near Zuoying. Unfortunately, meteorological forecast forebodes a grey and rainy day. Still we hope to visit some interesting places to get some interesting shots!

END_OF_DOCUMENT_TOKEN_TO_BE_REPLACED

We checked out of City Inn Hotel early next morning and took the High Speed Rail (HSR) 高铁 to 左营 Zuoying Station. It took barely 2 hours from Taipei to Kaohsiung!

Upon reaching Zuoying Station, we changed to the MRT and stopped at Kaohsiung Main Station, which is located near the train station. Kindness Hotel is just a stone’s throw away from the MRT exit. The room is relatively small but very clean. What more can we ask for a steal like NT1299 per night!

END_OF_DOCUMENT_TOKEN_TO_BE_REPLACED

We visited the Butterfly Garden located within Terminal 3 Transit Area and had lunch at Hard Rock Cafe at Terminal 3 before boarding our 4.5 h flight on Jetstar to Taipei!