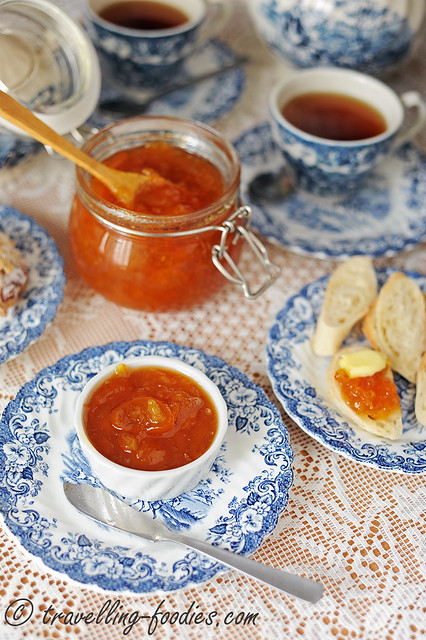 Winter in the northern hemisphere brings some ingredients which I’d been waiting for the whole year. Persimmons, honey apples and chestnuts just to name a few. Despite being in tropical Singapore, I prescribe to the old Chinese ideology of “不时不食” which basically means that one eats according to the seasons.  The winter fruits are always worth the wait as the cold impedes the ripening process allowing the fruits to store more sugars before reaching their prime. One fruit I’d always try to lay my hands on during this time of the year are kumquats, not because they are good for eating, but for making marmalades.
END_OF_DOCUMENT_TOKEN_TO_BE_REPLACED

This is a guest post at Veronica’s blog “Quay Po Cooks” whom I got to know through the numerous Aspiring Bakers bakealongs. From a fellow blogger to a friend, this lady beams with so much postive aura and sunshine, it is infectious! I love reading her blog, where every recipe entails a story, heartwarming tales of her family and friends which often reminded us of our very own. Through the lines, she shares with us her moments of euphoria and sorrow, causing one to can’t help but let out a giggle or shed a tear as we read along. Her words are often simple, yet enriched with much sincerity. In short, this woman writes from her heart. When Veronica invited me to do a guest post on her blog, I knew I couldn’t say no. In fact, it would be such an honour, as a repayment in kind, for the very many wonderful reads. Thank you for letting us in your life. 🙂

I asked Veronica if she had any preference for the recipe and she indicated that she’d hoping for something sweet, since pastry is my forte. I am flattered but surely sweetness cannot be the only dimension presented, especially for a woman who has led such a colorful life, After much deliberation, I’d decided to share with all of you a recipe which I feel aptly encapsulates the essence of all that Veronica’s been through. Oh yes, if you have gone through her blog like I did, you would know that this woman has gone through quite a bit over the years. Read on and you would know why…

END_OF_DOCUMENT_TOKEN_TO_BE_REPLACED

I remember watching Nicole Kidman’s Moulin Rouge exactly a decade ago during my undergrad days, bedazzled by the fascinating sets and exuberant costumes. This razzle-dazzle like fantasy on the life of a young Parisian socialite, Satine leading a life of absinthe-dripped extravagance (Yes! thanks to Kylie Minogue as the Green Fairy!), swooned by men from the streets of Paris, enchanted by her flamboyance, all flocking to the renowned cabaret just to be gleamed by her beauty.  ‘Gorgeously decadent, massively contrived, and gloriously superficial‘, are just some of the words used by critics on the movie but I say this is a mere understatement. Filled with song and dance, laughter and tears, this must have been one of the most refreshing musical films we’d seen in this century, since the days of Rodgers and Hammerstein.

Hilariously funny and at the same time, heart-pouring empathic, the movie is quite literally a roller-coaster ride. I particularly enjoyed the large scale scenes of song and dance, bearing overtones of a Bollywood production! And how cleverly used it was, such a classic! Now in retrospect, it all makes perfect sense to me the French artistic and haute coulture scene during that era must have been extremely curious and captivated by influx of Oriental and Asian elements, fueling ideas for Bizet’s Les pêcheurs de perles and Massenet’s Thaïs. And hence the elephants, saris and turbans we saw in the Maharaja scene. Entertaining and at the same time thought -provoking, at least for me!

When I first learned of Pierre Hermé’s Satine dessert series a couple of months back, I couldn’t help but feel extremely curious about the association of the PH’s confections with the Moulin Rouge. Paris, decadence, sugary indulgence, flair and flamboyance… the resemblance between the two is just too uncanny. I’m also very curious to know what it tastes like. Needless to say, very little is mentioned over the internet. ph10 has some recipes of desserts from the Satine series but being a rather technical and clinically written publication, no word on the source of inspiration. Alas, the recipe for the Macaron Satine could be found in PH’s Macaron and I had to get myself a copy and hopefully solve the puzzle. But wait a minute, since when do we ever need justification for buy PH’s works!?

So did I solve the mystery?