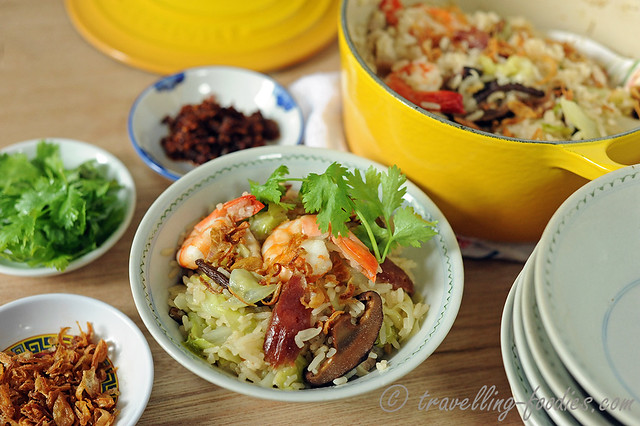 Yet another quick post! I just came back from a hearty discussion with two friends at Starbucks over homemade kueh sarlat and their matcha frappucino on heritage cuisine and some exciting projects that will be happening soon on this blog. All that talk of food made me very very hungry naturally. Just wanna eat some comfort food, something which would bring me back to the days of my childhood, something easy and fast yet full of flavour. There is only one dish I can think of, my mum’s  高丽菜饭 Kor Leh Chye Png Chinese Cabbage Rice.

END_OF_DOCUMENT_TOKEN_TO_BE_REPLACED

When I made Som Tam for Asia Food Fest Thailand two years back, I fell in love with how it tasted. The assemblage of piquant flavours from sugary to sour, savory and spicy came together beautifully to stimulate one’s palate. And now I turn to using green mangoes in place of papaya, for Som Tam Mamuang. Needless to say, it was equally, if not even more moreish and appetite whetting!
END_OF_DOCUMENT_TOKEN_TO_BE_REPLACED

I practically grew up eating laksa lemak, amidst other local delights and I’m quite sure there are well many others like me. The laksa which I remembered first eating was not any of those “branded” names along Katong . In fact, I had my first “Katong laksa” when I was much older in my 20s, and it is not even at Katong but the now defunct Jackson Kopitiam in Macpherson area. The very first bowl of laksa I had when I was really young was from an unassuming looking neighbourhood stall near my old place. This was way before the times when people were aware of Hepatitis B and way before it became fashionable to buy coconut milk in terapaks off supermarket shelves. In other words, it was the time when cockles were really large, fresh and bloody, and one could almost be certain that fresh coconut milk was used to ensure all the “lemak” awesomeness! This is the type of laksa which I grew up eating. How about you?

END_OF_DOCUMENT_TOKEN_TO_BE_REPLACED

Thai cuisine is up next for Asian Food Fest #2 and the contrast between Thai and Japanese food couldn’t be greater. Yet I love them both! For me, Thai food is all about the explosion of flavours albeit with little mouthfuls that go a long way. The prototypical impression many of us have on Thai food is its stong notes on heat and sourish palate profile. Thai cuisine liberally incorporates chili in many of its dishes so one is almost immediately hit by the impact from these little morsels of red firecrackers bursting in one’s mouth. Acridity and astringency introduced take form through the use of Thai green limes and/or tamarind pulp and together, they produce a wave of refreshing sensation against the heat, helping to subdue the latter slightly. Some say that it is really a competition of these two flavours but I choose to think that the amalgamation makes it multi-dimensional. Speaking of multi-dimensional, Thai cuisine is also heavy on the use of fish sauce, much loved for its savory hues and profound sense of umami flavours it transpires. In fact fish sauce, despite being commonly employed in Indochinese cuisines like Vietnamese, Laotian and Cambodian food as well, is synonymously linked with Thai food. And everything is balanced with a bit of sweetness from Thai palm sugar, a milder, and incidentally paler version compared to its southern cousin coconut sugar (gula melaka/gula jawa) used extensively in Straits and Indonesian cuisine. As such, Thai cuisine is really a big melting pot of flavours as well as aromatics. For me, one dish which epitomises the very essence of Thai cuisine has to be ส้มตำ Som Tam, its ever popular Green Papaya Salad.
END_OF_DOCUMENT_TOKEN_TO_BE_REPLACED

On the Trail of the Phoenix – Nyonya Chap Chye

In the past when my maternal grandma was still around, there were some dishes that made rather frequent appearances on the dinner table during family gatherings and Chinese New Year meals. Ngoh Hiang (Chinese five-spice pork and prawn rolls) is an absolute must, and preparation usually started days before, given the number of dishes she has to whip up on the event itself. My grandma modified the conventional style of making ngoh hiang and made them rather petite, each about 2 inches in length, almost bitesize to be gobbled up in quick sucessions. I remember how my cousins and I would sneak into the kitchen as the unmistakable aroma of ngoh hiang frying permeated the house, to grab a piece or two when they were freshly out of the oil wok, even if it meant to risk scalding our tongue and palate, and a probable spanking and tongue lashing from our mothers who were helping out with the feast, for being “ill-mannered” as our misbehaviour were referenced with beggars’!

Then there was always a gigantic pot of kari ayam, quintessential to all meals at my grandma’s. It was very very lemak, just the way I love it, and full of kentang which were two of my cousins’ favorites! Together with it was a large rice-cooker which was never empty, an assuring sign that there is always food in the house no matter what time whomever visited. Finally of course, there is an equally large pot of chap chye, cooked the day before to allow the flavours to fully develop overnight. There would be other dishes on the table of course, like Udang Masak Kicap, Tau Yew Bak (braised pork belly in rich soya sauce), or Hee Peow Tng (fish maw soup) on the stove but the trinity of Ngoh Hiang, Kari Ayam and Chap Chye was always there with their unfailing presence. Though the spread was simple, it was the very essence of traditional home-style cooking which kept everyone well fueled and watered, which in turn kept my grandma happy, knowing that her dishes are thoroughly enjoyed by her children and grandchildren!