A good friend recently gave birth so when some friends and I visited her last week in the hospital, I thought of cooking her something which is simple yet nourishing at the same time. Remembered I still have some bottles of essence of chicken at home so a quick trip to the market in the morning to get some fresh chicken thighs to go along with some chinese herbs and dry ingredients I already have at home for a fix of 鸡精蒸滑鸡腿 Steamed Chicken Thighs with Essence of Chicken.
END_OF_DOCUMENT_TOKEN_TO_BE_REPLACED 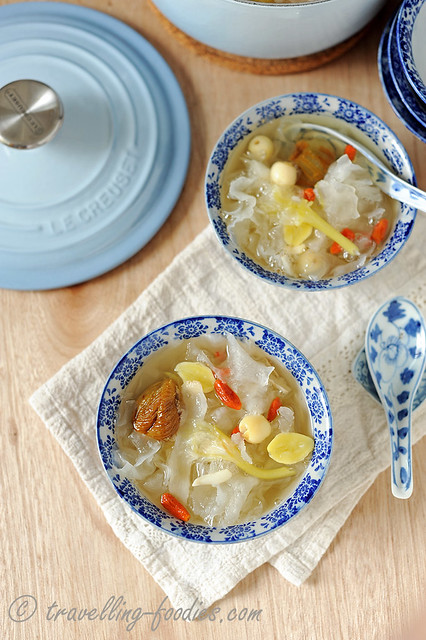 Seasons are changing, yes even in tropical Singapore. More cooling and rainy days, I simply love it! A good break from the hot and humid weather we typically get in the earlier months, leaving us all balmy and frustrated. I like to cook some hot “tong sui” during this time of the year too, a bowl of warm sweet broth packed with nourishing ingredients to prep us for the months to come. My small pot of “keng huay” is in bloom again, perfect timing to use those flowers to curb the cough and ease the sore throat that accompanied the flu bug for the last week or so!
END_OF_DOCUMENT_TOKEN_TO_BE_REPLACED

Bak Kut Teh for us has always been a treat since childhood. My family stayed in the Whampoa area when I was a small boy, which is not far from Balestier Road, whose shophouses are dotted with Bak Kut Teh shops, all claiming to be the “most original”, the “most authentic” or the first to set up shop here. Whichever the case, I’d never eaten at any of these Bak Kut Teh joints when I was young because the price was really prohibitive. The cost for a bowl of Bak Kut Teh with rice for one could easily settle dinner for my family of four at the Whampoa Hawker Centre nearby. Moreover, my mum always cook our meals which is more economical, not to mention homely.

Soup is a big thing in our family but usually kept very simple.  It would be cabbage, peanuts or black beans cooked with some chopped pork ribs or lean pork and chicken feet. Once a while, when spare ribs were more affordable and the costs more bearable, my mum would cook Bak Kut Teh, using pre-mixed sachets from the neighbourhood grocery store. So my childhood impression of Bak Kut Teh has always been really peppery and somewhat savory, which I got to know later on as being “Singapore-Teochew Style”. When I learned about the Hokkien style Bak Kut Teh from Klang Selangor, I remember being quite fascinated by it. The idea of a Chinese herbal soup is not alien to us. Mum cooked a variety of traditional soups using Chinese herbs all the time, mostly for their medicinal properties to cure certain minor ailments or boost our “qi“. But the herbs used, together with their beneficial effects, not to mention bitter taste are the key components of the concoction while any meat, be it chicken or pork added to form a broth simply act as a vector. So for the pork ribs to take centrestage and soya sauce subsequently added into a soup, the idea was quite mind-boggling. So when Selangor MFF was announced, I knew I have to try to cook the Hokkien-style Bak Kut Teh, a delicacy which Klang is mostly known for, not only by the locals but also foodies from other states in the Peninsula as well as folks from as far south as Singapore.

END_OF_DOCUMENT_TOKEN_TO_BE_REPLACED

八宝粥, literally to mean “Eight Treasures Porridge” is a traditional congee concoction enjoyed on 腊月初八 the 8th day of the 12th month in the Chinese Lunar Calendar, hence giving rise to its other name, 腊八粥.  Having it roots in Buddhism, the history of this dish can be traced back more than 2200 years back to the Han dynasty when it was generally used as part of prayer offerings and not consumed. Interestingly during the Song dynasty more than 800 years ago , the folks then began enjoying this porridge for themselves, causing it to evolve and change to reflect the culinary characteristics of each period in history, as well as in accordance to personal taste and liking.
END_OF_DOCUMENT_TOKEN_TO_BE_REPLACED

My parents, being really traditional chinese folks, are firm believers of the effects of traditional chinese medicine (TCM). That meant an assortment of remedies in the form of brews and stews to shelf-available medication for minor ailments, like 川贝枇杷膏 chuan bei pi pa gao for coughs and sore throats, 银翘解毒片 yin qiao jie du pian when we are feeling slightly feverish, or 保济丸 po chai pills when one’s having the runs. Some of these concoctions are really quite pleasant, like 炖燕窝 bird’s nest soup and 三雪湯, a sweet soup made with hasma (雪蛤), snow fungus (雪耳) and chinese pear (雪梨）which not only nourishes the body, but taste good too! I really didn’t mind when asked if I want seconds. But some are quite dreadful, like 苦茶 ku cha, which literally translates to “bitter tea”, owing to a mélange of chinese herbs used, building up to that ultimate palate experience of extremity, and 羚羊露 leng yeung luk, essentially made from water double boiled with antelope horn shavings, in my opinion is another epitome of disgust. Now these are the things that ought to be featured on “Fear Factor”! But as the classic Chinese saying goes, 良药苦口利于病, most of these awful-tasting TCM are downed amidst all that whining, wailing, coaxing and even bribery for sweet treats later on.

One of the most common TCM herbal soups we enjoyed at home is 药炖乌骨鸡 Herbal Silkie Black Chicken, especially during this time of the year when the weather turns slightly chilly accompanied by lots of moisture from the monsoons. Older folks believe that it is important to prepare the body for such “changes in season” and strength one’s constitution so as to prevent ourselves from falling sick，and hence the practice of 立冬进补. I hadn’t been sleeping well of late and as I was getting ready for a holiday to Taiwan, I wanted to make sure that my body was ready to brace all that walking, shopping and eating. Hence, a little “treat” for myself and my family with this familiar soup which hadn’t been made for quite some time at home.

END_OF_DOCUMENT_TOKEN_TO_BE_REPLACED

Poached Pears in Red Wine is a signature french fruit dessert which is both easy to prepare and delcious to enjoy. Better known as “Poires Au Vin Rouge“, this french classic uses port or some other full-bodied fortified wine as a base for a thick syrup enriched with spices. Its origins can be traced back to another French dessert named Poire belle Hélène created by by Auguste Escoffier, named after the operetta La belle Hélène by Jacques Offenbach. Incidentally creating desserts after popular themes or famous people seemed to be Escoffier’s speciality as he also gave us Pêche Melba, after the famous Australia prima donna.  Jacky Wu of 囍宴 Xi Yan, a restaurant chain in Hong Kong and Singapore specialising in the concept of “private dining” decidedly gave this dish an Oriental twist with their restaurant signature “囍有此梨” 桂花陳酒燴啤梨 Poached Pear in Aged Osmanthus Wine, with the incorporation of 桂花陈酒 aged osmanthus wine from China. The palate experience provided is quite different from that of the original Poires Au Vin Rouge but no less enjoyable!

END_OF_DOCUMENT_TOKEN_TO_BE_REPLACED

As far as I remembered, vegetables have always been part of our staples over the dinner table for almost every meal. My mother made it a point to incorporate vegetables whenever she can in our meals since young, very simple dishes like garlic stir-fry of sawi greens,  or a spinach with ikan bilis soup, and of course cabbage in our all-time favorite, 高丽菜饭  gor leh cai png, i.e. one-pot cabbage rice. The spread of vegetables were usually our local fanfare of 菜心 choy sum, 苋菜 bayam and 小白菜 bak choy. Carrots were expensive then, far and few between and broccoli was virtually unheard of until I was much older. Despite being one of her favorites, my  mum avoided cooking 空心菜 kangkong as it was deemed too “cooling” for our young constitutions, much like how she would enjoy braised chicken feet in 凤爪面 Fung Zao Meen on her own but sternly forbade us from eating itas it is believed that children who ate chicken feet would develop jerky and wobbly limbs, resulting in ugly handwriting! But I’m glad that years later, I’d inherited her love for local fanfare which we enjoyed together, kangkong and braised chicken feet amongst other things.

Cangkok Manis is a vegetable which appeared infrequently in our meals.It usually manifests as an egg drop soup, with minced pork balls and ikan bilis, finished off with an off-flame swirling of a beaten egg. Truth be told, I didn’t really enjoy it when I was a boy, despite being told how dark green vegetables are beneficial to us. Its taste cannot be more different from what its name depicts, leaving a slightly bitter aftertaste in the mouth. I much preferred the version with bayam! So with much discouragement and negative feedback from us, the appearance of this soup from our dining table grew infrequent and disappeared altogether as we grew older. Now that my mother is no longer with us, how I wish I could taste her version of this soup again…