Mention Singapore hawker fare and many familiar dishes come to mind. Char Kway Teow, Chye Tow Kueh, Laksa, Bak Chor Mee are just some of the familiar favorites which any true blue Singaporean would be more than glad to indulge in whenever the opportunity avails. A dish which I truly love and enjoy immensely is Char Hae Mee, which is also known as Fried Hokkien Prawn Noodles. And here is my humble attempt to recreate this much-loved noodle dish at home.

END_OF_DOCUMENT_TOKEN_TO_BE_REPLACED

On the Trail of the Phoenix – Nyonya Mah Mee

The Peranakans of the past were known to observe etiquette and decorum notoriously. It began at home where everyone was expected to know how to address one’s relatives correctly, making sure one could differentiate the nuances in one’s relationships with their “pek“, “engku“, “engteoh“, and “chek“, terms which are often reduced to a simple “uncle” nowadays. Out of the family context, it was important to know and observe the social hierarchy put in place then and not only understand, but also be well adapted and assimilated into one’s designated role. In short, one is expected to know what the “pecking order” was like and how to will one’s means to reap and benefit the most out of it. It was important for a baba or nyonya to be seen as being “proper” or in Peranakan terms, “tau adat” which basically translates to “know your customs and practices well”. Only then can one be described as being “alus” (refined) or for the nyonyas “senonoh” (elegant and demure) rather than being “kasair” (uncouth). Social behavior was maintained to the strictest order and it was of pertinence for one to be “well placed” into his or her position in society, with the Peranakan families well connected amongst one another through intermarriages, maintaining a close relationship with the colonial masters whom they collaborated or worked for, as well as the sin kheks whom these baba towkays employed and provided for.

Protocol and formalities once perpetuated every aspect of the ways of life of a Peranakan, even in its cuisine. Some dishes were cooked specifically for certain occasions and having them appear on the dining table otherwise was a big no no. For example, “pongteh” was a dish prepared for semayang abu (ancestral prayers) and not to be confused with “chin“, a very similar dish which was associated with weddings instead. The same was with the “kueh culture” for the Peranakans, colour coded to highest levels of specifications, red and yellow for festivities while green and blue were for funerals. But over the years as the generations evolved, many converted to Catholicism or “masok Christian” and abandoned these practices, while for others the “reins” faded and eventually disappeared as they became more influenced by Western culture, married out of the baba-nyonya community or simply migrated to a part of the world where Asian culture isn’t a mainstream, let alone the Peranakan way of life. As such many aspects of the “adat” and its “rules” became relaxed, with only a handful of puristic Peranakans still stauchly following the very traditional customs to the strictest order and in full regalia. Thus, it is not uncommon, to find dishes which were previously cooked for separate occasions appearing on the same dining table nowadays. The identity of certain dishes also evolved over time, and one of them is Nyonya Mah Mee, which is sometimes just called Mee Nyonya.
END_OF_DOCUMENT_TOKEN_TO_BE_REPLACED

Odd it may seem, my favorite dish to order whenever I walk into a traditional chinese noodle shop in Hong Kong is not a bowl of 云吞麵 wan tan meen or 水饺麵 shuei gau meen. For years, it has always been 柱侯牛腩麵 ngau nam meen aka braised beef brisket noodes for me. Not sure why but I’d always preferred this over the popular pork or shrimp dumplings for its robust flavours and the melt-in-your-mouth bites of beef brisket as well as succulent chunks of beef tendon which had been braised to the right texture and consistency. It was until more five years ago when I first visited 劉森記 in Sham Shui Po where I found another love. Their 南乳焖猪手 Braised Pig Trotters with Nam Yu Fermented Beancurd was cooked to perfection I thought. Delightfully aromatic and with flavours which are strangely familiar and yet alien to me at the same time, it was love at first sight… or taste rather. Since then I’d been going around trying out various noodle joints not only for their 柱侯牛腩麵 but also their 猪手麵 whenever possible. We braise pig trotters at home all the time, from 卤猪脚，the traditional dark soya sauce version which is prevalent in local Hokkien and Teochew cooking, to 猪脚醋, the richly vinegared version for the occasional indulgence of sweetness and tang. It didn’t take long for me to try and cook 南乳焖猪手 at home for myself, to satisfy my own cravings for this dish whenever I could, whenever I want.

END_OF_DOCUMENT_TOKEN_TO_BE_REPLACED 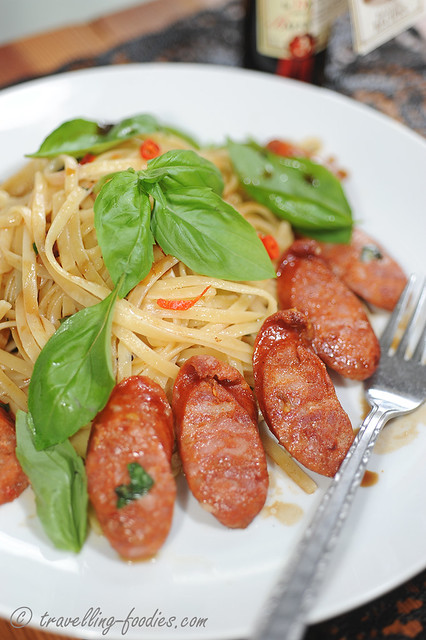 Yet another lazy man’s pasta recipe to share and if I may say, a rather ad hoc one. That’s one thing I love about having pasta for meals. It really depends on what is available and what is good in my fridge. Linguiça is basically Portuguese spicy pork sausages. Heat comes from paprika used in its curing process and that I love. In some ways, it likens the Italian pepperoni but yet the flavours are quite distinctively different.

END_OF_DOCUMENT_TOKEN_TO_BE_REPLACED

Lunch at home alone is usually very simple fanfare. One-pot meals are even too much of a hassle and takes too much time sometimes so its usually down to a simple fried rice or noodle dish with pantry or freezer available ingredients. Pasta is one of my all-time favorite options, effortless to prepare and require almost no time at all. And on today’s lunch menu, Linguini con Salsiccia e Porcini Balsamico… a very long name for an extremely simple dish 🙂