I don’t usually celebrate Thanksgiving. Was chatting with a good friend, Catherine on Tuesday about pineapples (yes, not the kinda thing you taught to your good friends about I know) and we went on talking about Thanksgiving two days later (which is today by the way!). Wanting to feel a bit more festive, I decide to deck out some of my Le Creuset dutch ovens for a simple Asian-themed Thanksgiving lunch!
END_OF_DOCUMENT_TOKEN_TO_BE_REPLACED 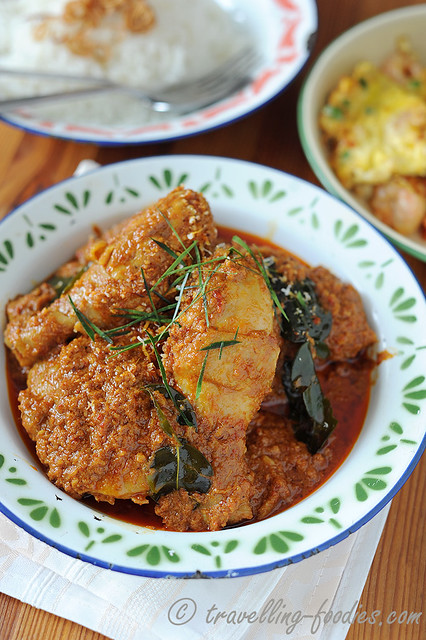 I don’t know about you guys, but from where I live, no one could resist a good rendang. Thick slabs of meat which had been stewed in a rich and spicy coconut-based sauce over a prolonged period of time is simply to die for. Rendang is the pride and joy of Indonesian cuisine from the Minangkabau people in Sumatra but owing to trade routes and migration patterns, it spread to other parts of Asia, most notably Malaysia and Singapore where it is widely enjoyed and savoured. It has become much of a staple in Malay cuisine, served at festivity gatherings and wedding feasts. Just like many dishes from Malay cuisine, rendang has also found its way onto the dining tables of the Peranakan community. Ask any Baba if rendang is part of the standard laok embok embok, or what is commonly known as Peranakan cuisine, and one would immediately be met with a deep frown as if one has suggested the unthinkable. But ask further if he and his family enjoys rendang and cook it often, that stern look would quickly mellow and dissolve into a sheepish smile. The ingredient of choice for rendang is beef, which is stewed over hours at length until the meat becomes so tender that its fibres could easily be pulled apart with the slightly nudge with the fork. Otherwise, mutton is also good or in this case, chicken! And that is precisely what I cooked this time, Rendang Ayam!
END_OF_DOCUMENT_TOKEN_TO_BE_REPLACED