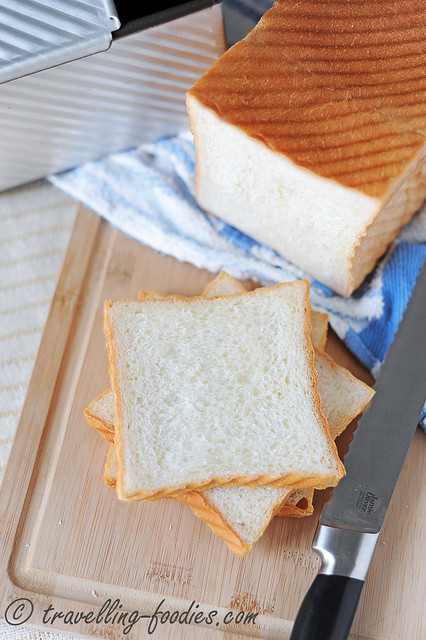 Bread is part and parcel of the our lives. It is a staple for many as its versatility allows one to have it for practically all meals of the day, be it breakfast or supper. Its portability allows one to have it as a meal-on-the-go, be it on the bus or while waiting for it. Here’s a no-frills bread recipe which I’d been using for sometime now. I seldom make bread because I simply don’t have the patience for it. The multitude of waiting times as the bread goes through repeated proofing as well as time for the dough to rest. But once a while when a recipe calls for bread or when I’m in the mood, I’ll just get my Pullman tin out to make a simple loaf. It is incredibly easy to make with very reproducible results!

END_OF_DOCUMENT_TOKEN_TO_BE_REPLACED

It had been a long and eventful month for MFF Penang and it is with mixed feelings that it has finally come to an end. The few weeks prior to June was particularly gruelling, having no clue on what to cook and what to present. Like the other MFF events, whipping up dishes for Penang MFF provided an opportunity for me to get to know more, not only about the food in Penang but also the people behind them.

A big thank you to one and all who has taken the time to come up with these delectable dishes. Many of you like Cynthia, Amie, Lena, Phong Hong, Cindy, Doreen, Mary … etc shown great support by whipping up multiple dishes. The event also drew the attention of several Penangites who had expressed interest or shown concern over the authenticity of the dishes prepared. Well, the objective of MFF is to promote the awareness of some of these localised dishes, some of which are already dying in the trade as we speak. While staying true to the originality of the actual dish is important, it is not of utmost priority… at least not for me. What was more important, is the effort put in and willingness to try, despite the need to venturing into unfamiliar and undulating terrain to prepare dishes which one has never tried before, both in cooking and in eating. So kudos to you all! Now you can really say that you’d been there and done that!

END_OF_DOCUMENT_TOKEN_TO_BE_REPLACED

Roti Babi is a Penang Peranakan dish which I have been quite curious about since I read the recipe in Debbie Teoh’s book.  Bread slices coated generously with an egg batter reminds me much of traditional French toast, a childhood delight for my sister and I, only that in Roti Babi the bread is much thicker and stuffed with an “inti” (filling) made up of minced pork and onions. What is more intriguing is the “rempah” (spice paste) used in the filling, which consist of ketumbar (coriander seeds), buah pala (nutmeg) and cekur (lesser galangal aka “sand ginger”).  I can already imagine how wonderfully perfumed the inti will be just from reading the recipe and yet at the same time, wonder how cekur actually tastes like as I’d not used it in cooking before!