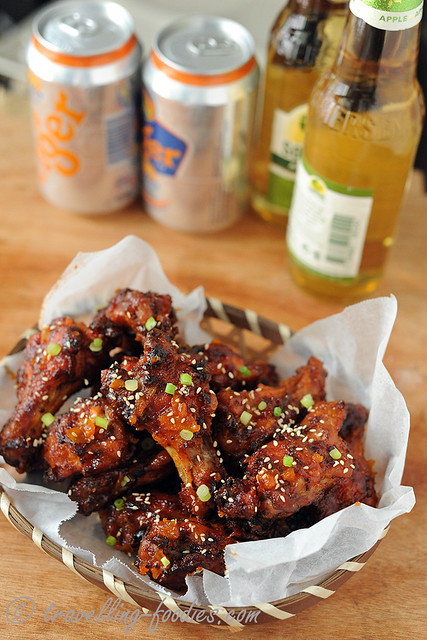 Children love chicken wings! Everyone loves chicken wings! And I love chicken wings! In fact, I don’t know anyone who doesn’t love chicken wings! Wings are the preferred cut for many for a myriad of reasons. Easy to eat, moist and succulent, especially when they are deep fried. Oooh yes… hard to resist a good piece of good fried chicken wing and I guess this “pop culture” runs across many communities be it the Texas style or Buffalo Wings to the ayam goreng berempah as a good accompaniment to our local nasi lemak, not forgetting the korean chicken wings which are the current latest craze! But surely there must be a healthier way to get crispy chicken wings without the guilt from all the greasy and oil they have to go through to exude all that juicy goodness. And yes there is indeed! So here’s a rather quick and easy recipe for oven baked chicken wings to go together with a special spicy kumquat marmalade glaze. The perfect snack for entertaining guests in the upcoming Chinese New Year holidays!
END_OF_DOCUMENT_TOKEN_TO_BE_REPLACED

上海生煎包 Shanghai Sheng Jian Bao Shanghainese Pan Fried Steamed Buns is a local snack that originated from Shanghai in the 1920s. The novel way of pan frying the mildly proofed buns before steaming them directly in the same flat pan over a stove became extremely popular as a street food and remains so in Shanghai today, alongside 小笼汤包 Xiao Long Steamed Dumplings and other delectables in Shanghainese cuisine also known as 沪菜 or 本帮菜. Cuisines from other places in China like the neighbouring Zhejiang (浙菜), stretching northwards to Shandong (鲁菜), or southwards to Guangdong and Hong Kong （粤菜） also have very similar versions, where these buns may also also known as 水煎包 Shui Jian Bao. The culture of eating these Pan Fried Steamed Buns spread to Taiwan during the mass exodus of Chiang Kai Shek’s KMT army from China to the island state in the late 1940s. A large portion of Chiang’s troops are from the Yangtze region, especially those from his hometown, 奉化 Fenghua in the Zhejiang Province 浙江省. These soldiers, together with those from Shandong, Szechuan and even Yunnan, forms up a large part of Taiwan’s migration population in the last century to become what the locals grew to call 外省人 Wai Sheng Ren. The influx of these soldiers and their families from Mainland China greatly diversified the social habits and culinary cultures in Taiwan. Many of these dishes brought along and introduced by these migrants became so deeply rooted, that they are now enjoyed by the tourists, as well as the Taiwanese, be it the locals 本省人 Ben Sheng Ren, or the 外省人 alike. 上海生煎包/水煎包 is one of those popular snacks.
END_OF_DOCUMENT_TOKEN_TO_BE_REPLACED

八宝粥, literally to mean “Eight Treasures Porridge” is a traditional congee concoction enjoyed on 腊月初八 the 8th day of the 12th month in the Chinese Lunar Calendar, hence giving rise to its other name, 腊八粥.  Having it roots in Buddhism, the history of this dish can be traced back more than 2200 years back to the Han dynasty when it was generally used as part of prayer offerings and not consumed. Interestingly during the Song dynasty more than 800 years ago , the folks then began enjoying this porridge for themselves, causing it to evolve and change to reflect the culinary characteristics of each period in history, as well as in accordance to personal taste and liking.
END_OF_DOCUMENT_TOKEN_TO_BE_REPLACED