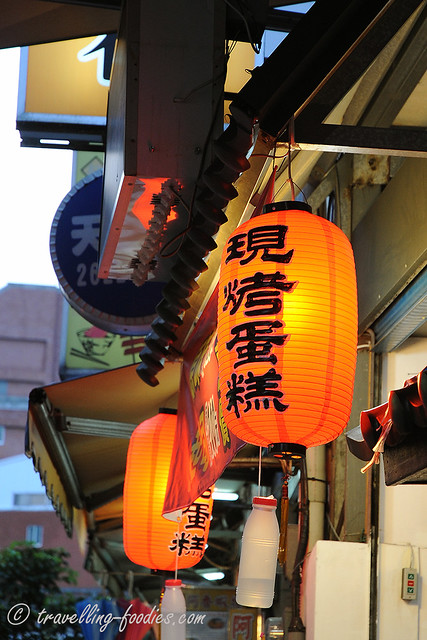 The pastry scene in Taipei is really developing very rapidly. Just barely a year since our last visit and so many new cafes and pastry joints have sprung up all over. One thing we’d also noticed, is that some of the traditional bakeries seemed to have caught up with the trend and begin to decorate their cakes with macarons and tempered chocolate pieces in place of the old school cream and piped gel decor. To survive one has to keep up with times. And this is true for practically every trade.

Yet amongst this wave of change, there are some who preferred to stick by the old ways. Despite the rebellious resilience to resist changes, they seem to have a strong and loyal following of folks who would continually patronise these shops who simply refuse to jump on the bandwagon. This comes as no surprise as these old school confectioneries sell not just cake, but also “peddle” memories and reminiscence of the not-too-long-ago yesteryears that go together with it. Nostalgia is after all a very powerful ingredient as you probably already know, remember the past to fuel the future. 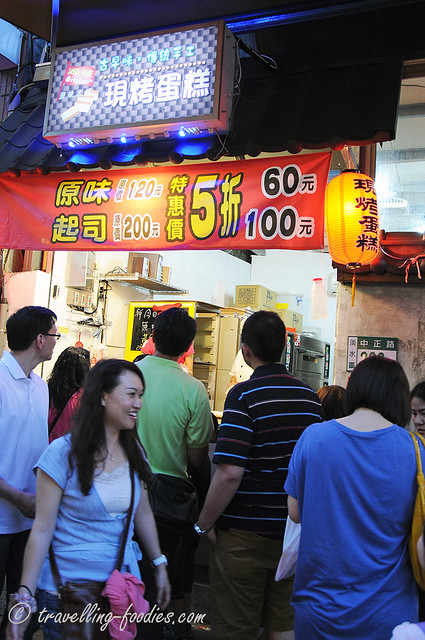 Along the streets of Danshui, there is one interesting cake shop. It only sells sponge cake which is baked on the spot and they come in only 2 flavours, 原味 “original” and 起司 “cheese”. Nothing is pre-fabricated in a factory or central kitchen elsewhere. Everything is baked and sold right before your eyes. Before you can see the shop, you would already be able to “smell” it, as wafts of fragrance from freshly baked sponge cake would get your nose twitching, in search of the source of that lovely aroma. The other interesting thing is how cheap the cakes are sold. A portion equivalent to a huge brick slab goes for only NT 60 for “original” and NT 100 for “cheese”. That is less than SGD 3 and 5 bucks respectively. No way we can get that over here in Singapore… so a definitely must-try… 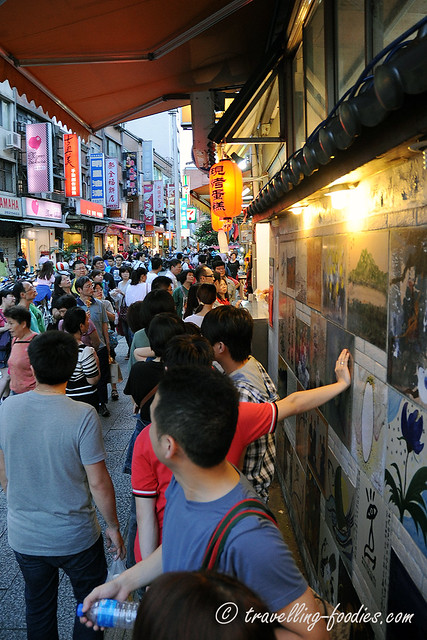 There is always a queue forming outside the shop, all waiting in eager anticipation for the next round of cake to be freshly baked from the oven. And queues always attract the curiosity of onlookers and passers-by, all trying to get a peek of what the “commotion” is about… 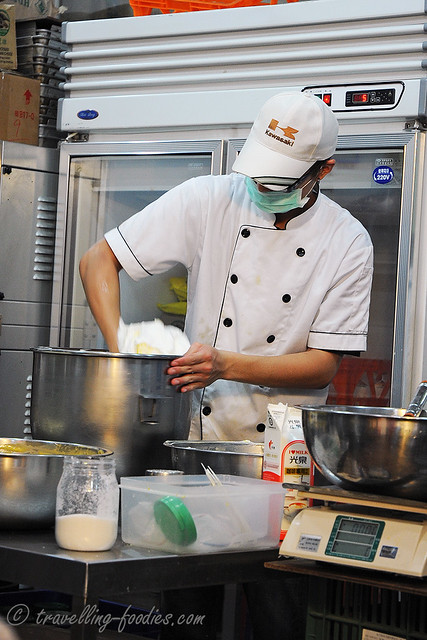 Like I’d said, everything is made right before our eyes as the kitchen adopts a semi “open concept” with the “make and bake” process of the sponge cakes in full view, from the weighing and sifting of the dry ingredients to folding in the batter. If one has the patience, one could spend a good an hour or two standing there to learn a few tricks on sponge cake making from just observing all the action going on! 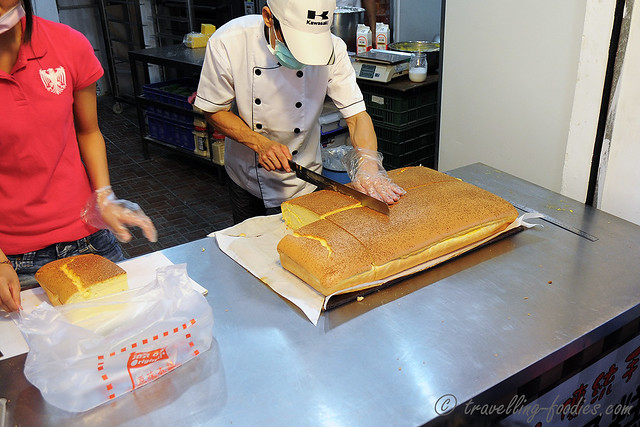 And finally the cake is done! The moment the oven door opened, all those near the counter let out a little “waaah” as they were being totally overwhlemed and engulfed by the aroma of freshly baked cake, a melange of sweetness hinted by a a savory note from the cheese. This was the second tray which we saw being baked and cut right before our eyes. The surface is perfectly glossy and smooth, save for a crack near one of the side, I would say the cake was perfect! Each portion is carefully measured with a long metal ruler before being meticulously cut with a long flat knife to great precision. Taste aside, the act of cake baking and cutting is quite a performance already! 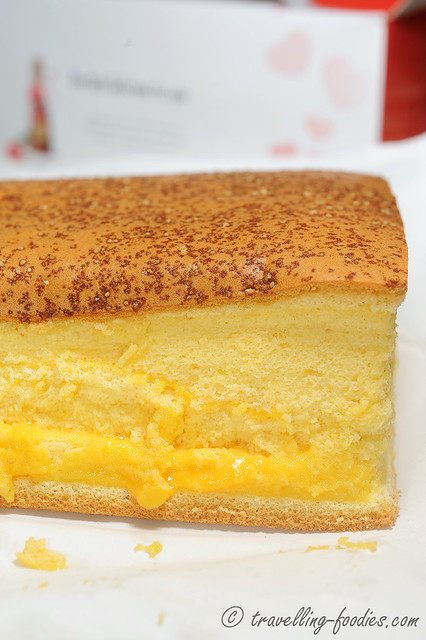 Some folks couldn’t bare the wait and started to eat right outside the shop, attracting the attention of even more people. The long queue of people in anticipation, the sweet aroma lingering in the air, the open concept of the kitchen, the baking process unfolding right before you… all these is very, very clever disguised marketing if you ask me… and very successful indeed. 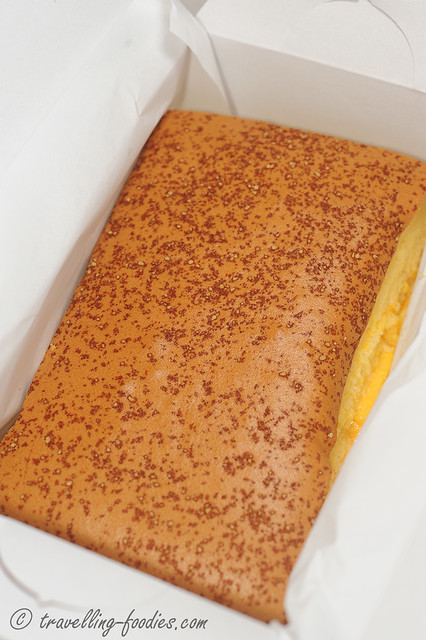 Our portion brought back to the hotel. The box costs another NT 10, which was not too much to ask for I thought. As mentioned, smooth glossy surface, with cheese filling oozing out from the sides…very alluring indeed.

But how is the taste? The shop describes their cake as being full of 古早味, and rightfully so. The taste and texture reminds us much of very old school sponge cake, somewhat springy and firm, with quite a bit of bite. Not the cottony and soft Japanese-influenced sponge cakes which most of us are accustomed to eating nowadays. 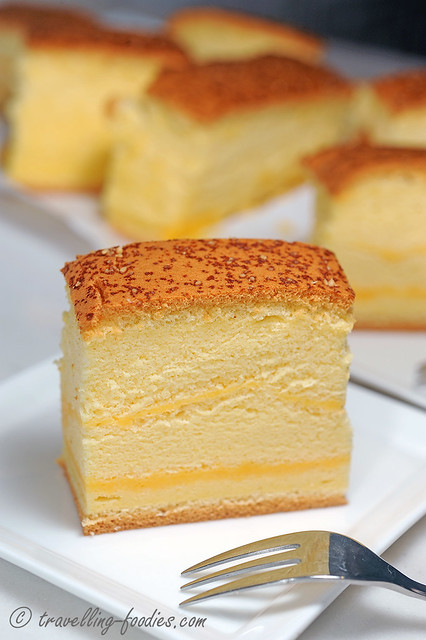 The “original” flavour ones were already sold out for the day when we reached, so we had the cheese-flavoured one. Apart from the two layers of “golden cheese” filling, the cake body was also added with cream cheese as well I think. I like the intermingling of savory cheeziness amidst the sweetness of the cake. That helped to balance out things a bit. The cake body itself was not too sweet, with a strong hint of eggs. But for a huge slab that goes for so little money, one can hardly be too picky about it. 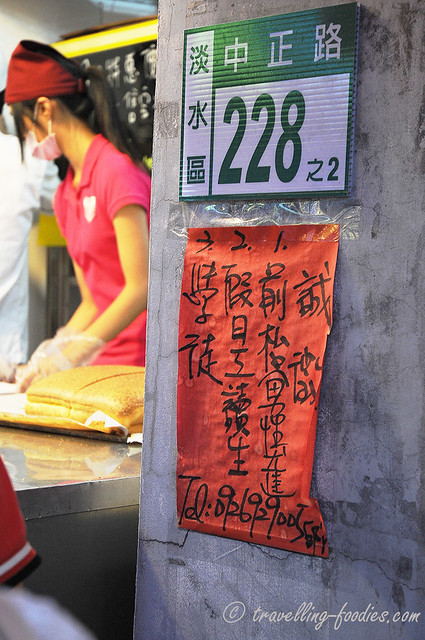 So if you happen to be Danshui, do keep a lookout for this cake shop. They are located just diagonally opposite the very famous 阿婆铁蛋 “Ah Po Iron Eggs” along 淡水老街 “Danshui Old Street”. Even if you decide that the day is not a cake day for you, looking at how the cake making is done before your eyes is already quite a sight to behold!

This entry was posted on July 12, 2013 by Alan (travellingfoodies). It was filed under Food, Travel and was tagged with cheesecake, Danshui, Taipei, Tamshui, traditional, 原为蛋糕, 淡水老街.